Portal is the new Android app from the renowned app developer Pushbullet. The app lets you send files from PC to Android via WiFi, without going through any hassles of plugging in wires. The best part of the app is that you have to install it only on your Android device and there’s nothing to be downloaded on the PC. The Portal app works through a web-based client for handling the processes taking place at the PC end. You can use it to send any type of files from PC to Android and it also supports batch file transfer.

The USP of the app is that it automatically stores your images and music files to their corresponding dedicated folder on your device. It ensures that you can view them in your gallery and music player apps, without worrying about first locating and then copying them to the respective folders.

The Portal app works similar to the Whatsapp Web Version for chatting via your PC. So, let’s jump on to the steps.

Steps to Use Portal to Send Files from PC to Android:

Step 1: Open Portal web client on your browser and install Portal Android app on your device.

Step 2: Scan the QR code on the web client via the Portal Android app. Make sure that both your PC and Android device are connected to same Wi-Fi network. 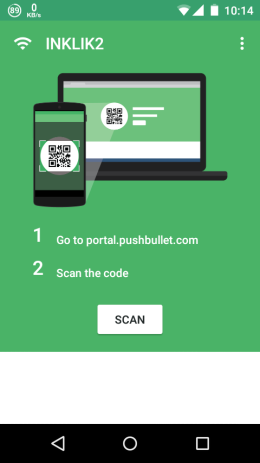 Step 3: When connected, you will see the interface shown in screenshots below on your PC and Android device respectively. 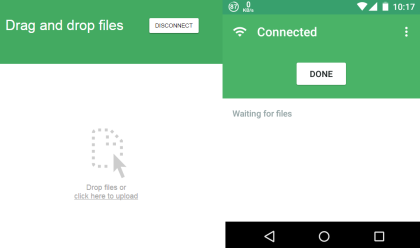 Step 4: Add the files you want to send to Android by drag and drop.

Step 5: Once the files are added, the sending process will start. You can also see the progress bar.

Step 6: When files have been received, you will see the interface on Android app as shown in the screenshot below. You can tap the share icon to share the file with anyone you want. 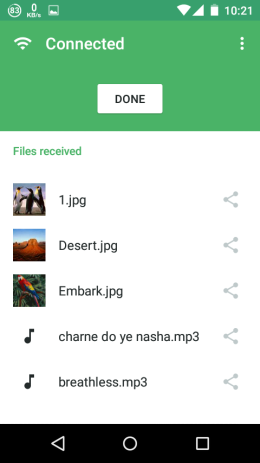 This way, you can easily send as many files as you want to Android from your PC by simply drag and drop. Isn’t it easy and fast? Besides this standard way, the app also provides a few settings which you can adjust as per your choice. You can go to settings by tapping on three dot icon in the Android app. 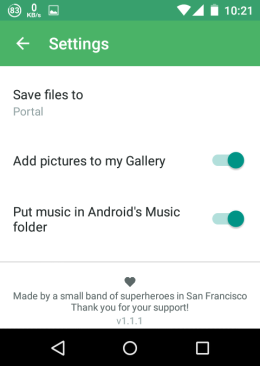 From here, you can choose to save the received files to the SD card if you are running Android 5.0 (Lollipop) or above. The other two options are for disabling the Portal app feature which automatically saves the images and music files to their default folders respectively. If you disable them, then you will find those files in folder named Portal.

You may also like: 5 Free Android Apps to Wirelessly Transfer Data from PC to Android.

Portal is a good and easy to sue app for sending files from PC to Android. The app is good for those who don’t go through a lot of hassles of setting up apps and clients on their Android devices and PC respectively. It is quite like the plug-n-play way of sending files. It’s definitely worth a try.