24hDone is a free and simple Android to-do list app to plan tasks for next 24 hours. This app allows you to easily add and keep a stack of tasks which you would need to complete within 24 hours. Unlike other to-do list apps for Android, this one doesn’t have any additional features like reminders, notes, attachments, etc. But, if you’re looking for an effective, simple, and easy to use to-do list app for Android, then using 24hDone is probably the best possible option for you. The user interface is super intuitive and you don’t need any Internet connection or to sign up for using this app.

You can add as many tasks as you want and then you’ll have a time period of 24 hours to finish all the tasks. All the active tasks will be visible on the tab named, “ON TIME”, along with a progress bar which will indicate the remaining time for completing the tasks. Another interesting feature of this app is that after any task expires (means you didn’t complete the task within 24 hours), it will automatically move the task to the “OUT TIME” tab. This tab actually keeps a record of incomplete tasks from where you can either remove all the tasks or re-activate them for completion. 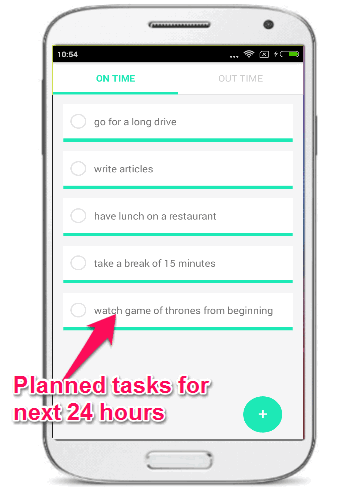 How to Plan Tasks for Next 24 Hours on Android using 24hDone:

As soon as you open up the app, you can start planning tasks for the next 24 hours instantly, as it doesn’t require any registration. On the main screen, you’ll see two different tabs named, “ON TIME” and “OUT TIME” at the top along with a “+” button at the bottom. 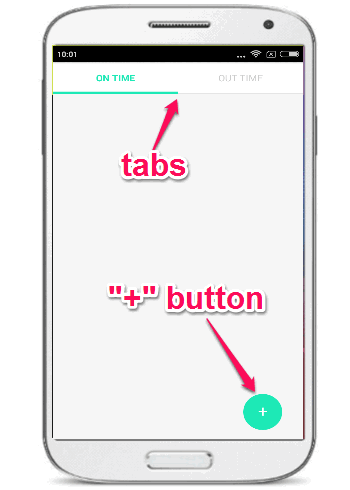 Now, to plan a new task for the next 24 hours, simply hit the “+” button. After that, you will be able to write the task description and tap on the “Add” button to activate the task. If you want to edit the task later, then all you got to do is tap on it to make changes and hit the “Update” button to apply changes. 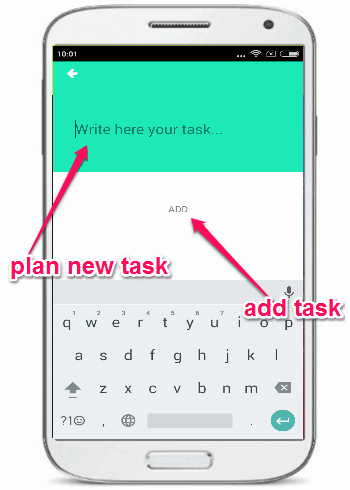 Once a new task is created, it will be added to “ON TIME” tab automatically and you also will see a message saying that you’ve 24 hours to complete the task. All the active tasks will be visible on this tab along with a colored progress bar (which indicates the remaining time) at the bottom of each task. In the below screenshot, the progress bar is light green. 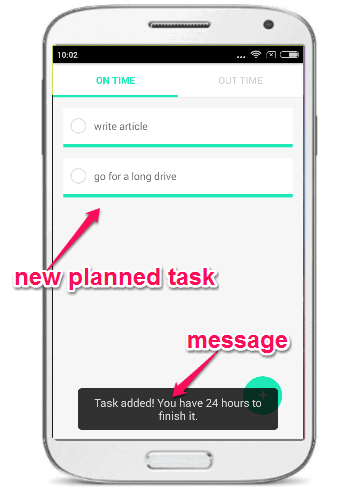 Now, each time you complete a task within 24 hours of planning the task, simply tap the blank circle associated with the task to mark it as completed and remove from the “ON TIME” tab. Let’s say, you didn’t complete a specific active task within 24 hours, then it will automatically expire and moved to the “OUT TIME” tab. Now, you can either remove the task permanently or re-activate it to finish it up. 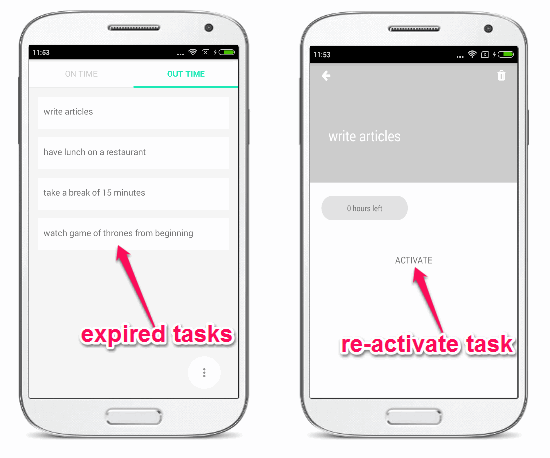 24hDone is a pretty useful Android app for managing and keeping track of your daily tasks. For each task, it puts a deadline of 24 hours such that you will try to finish them before the time runs out. One of the major reasons for which I will use this app is the simple and intuitive interface. Apart from letting you plan tasks, it also keeps a record of expired tasks, which you can re-activate if required.