Microsoft Solitaire Collection is a free Android app that offers various solitaire games like Spider, Pyramid, FreeCell, and more which you can play on one single platform. This app includes all the typical solitaire games of Microsoft and alongside offers daily challenges for players, statistics link, etc. To play the solitaire games, you won’t need to sign-in with Microsoft credentials. However, if you would like to keep your gaming progress, awards, and achievements synced (via cloud), then signing in to your Microsoft account is the best option for that. You can simply tap on any of the games and then play it as you normally do on Windows version. In addition to that, it also allows you to sign-in to Xbox Live to earn achievements and see how you compare with your friends in gameplay.

This is the same Microsoft solitaire collection which was earlier exclusive to Windows only, but Microsoft recently launched it for both the Android and iOS platforms. So, if you’re already a fan of Microsoft’s solitaire bundle, then you can now experience it right on your Android phone as well as iPhone for free. 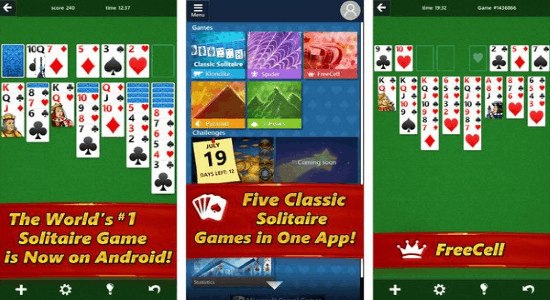 Note: This app is now also available for iPhone, but I have only reviewed the Android version in this post. The free version is ad-supported, and you can buy the premium edition to remove ads and also for double coin rewards.

When you open up the app, you will see all the solitaire games listed in the “Games” section at the top of the screen. The supported solitaire games are TriPeaks, Klondike, FreeCell, Spider, and Pyramid. 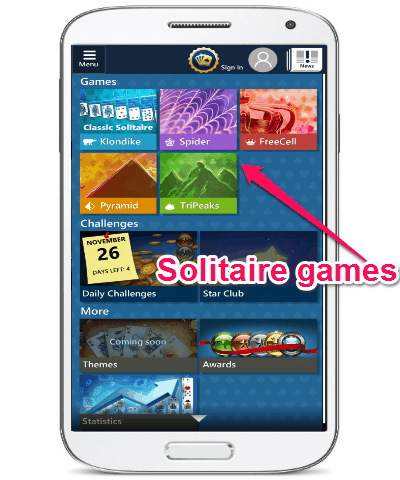 Now, to start playing a game you can simply tap on the game grid and it will open up instantly. As mentioned, you don’t need to sign-in to play the games, but to keep them synced on the cloud you can tap on the Sign-in button at the top and use your Microsoft credentials to sign-in. 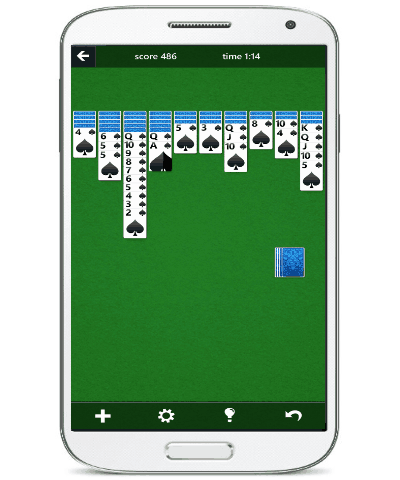 The gameplay of all the 5 games are similar to the Windows version, but I have noticed one difference in the “Spider” game. The difference is when you tap on a card, it will automatically move to any of the next fitting cards.

At the bottom of the main screen, you’ll see a tab named, “Daily Challenges” under the “Challenges” section. In this tab, you’ll be able to explore and play the daily challenges of each of the five Solitaire games. It will also display your monthly progress at the bottom of the screen, as shown below. 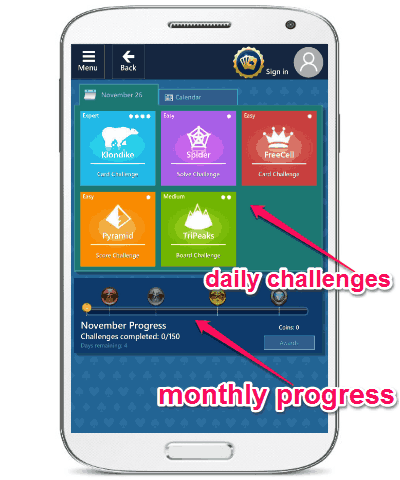 You can simply select any of the challenges and it will display the goal, reward, and bonus details before proceeding. Once you’re done completing a challenge, it will reward you the associated coins and your progress bar will increase. It also comes with a calendar view where you can track your achievements of daily challenges. 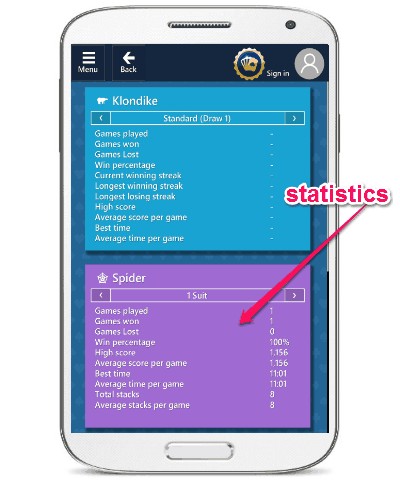 Adjacent to the “Statistics” tab, there will be the “Awards” tab on which you will be able to check the badges you’ve earned from daily challenges. Apart from that, you’ll also be able to sign-in to Xbox Live to earn achievements and see how you compare with your friends in gameplay. 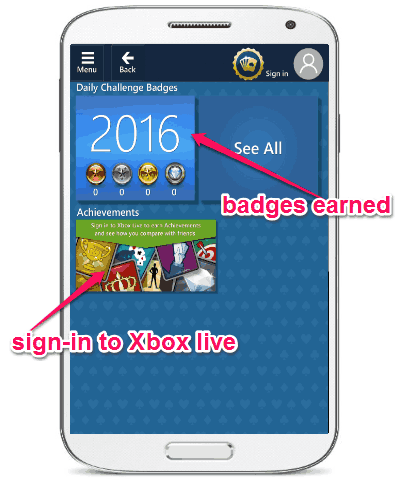 Microsoft Solitaire Collection app for Android bundles 5 of the interesting and addictive solitaire games, which you can now play on your Android phone. Personally, I am a die-hard fan of the solitaire collection of Microsoft and now this app has made it possible to experience all the games on my Android phone. So, what are you waiting for, go ahead and install it right away on your iPhone or Android.