Puppeteer Recorder is a free Chrome extension that lets you record browser actions as Puppeteer script. Here this a simple and handy extension for automation engineers and data scrapers to export a browsing session as Puppeteer code. Think of it as a screen recorder but instead of the screen, it intelligently records your interactions with browser and then generate the code. Currently, it can record clicks, input events, pause recording while navigating, tweak settings of generated Puppeteer code, and some others. This is open source and in active development and more features will be available in upcoming versions.

Puppeteer is an alternative Selenium which is an automation tool for developers. Puppeteer is used to control Chrome programmatically from different programming languages and mostly using JavaScript. Chrome automation can be used at many places such for scraping and other automation which involve use of a browser. In that case, you can use this simple extension to save yourself from writing Puppeteer code on your own. That can be tricky and which is why you can rely on this simple Chrome extension that you will like. 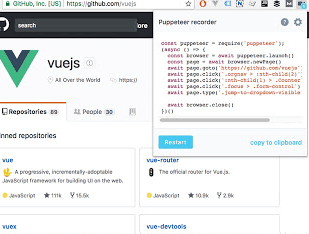 How to Record Browser Actions as Puppeteer Script with this Chrome Plugin?

Using this extension is actually very simple. You just get it from Chrome web store and when its icon appears in the Chrome toolbar, simply start using it. There is a record button in the extension that you can use to start recording. And after that, and it will start generating the code all behind the scene. 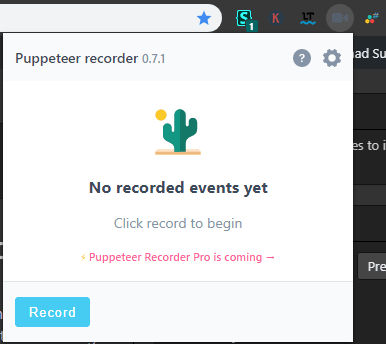 So, start doing what you record as Puppeteer script in the browser. And when you are done, you can simply stop and then it will reveal the generated code. In one click, you can copy the generated code and then use that in Node.js programming. Or, you are free to use that code whenever you need that. 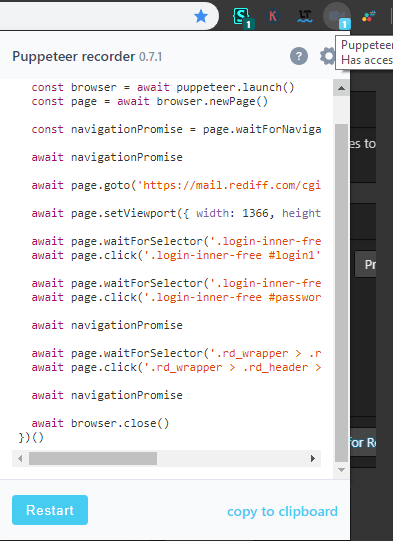 In this way, you can use this simple Chrome extension to record browser actions or interactions as Puppeteer code.  The code that it generates is good and if you see anything missing then you can simply add that. Currently, it supports some really useful events and you will be able to generate almost any kind of automation code then you can use that in the way you want.

Puppeteer Recorder is a very nice free Chrome extension which you can use to quickly generate Puppeteer code and then use that anywhere you want. All you have to do is just start recording in one click and let it record browser actions for you. Later, it will translate those actions to Puppeteer compatible script. For small projects, the code will be precise, you won’t have to do any changes in that.