In this tutorial, I will cover a simple way to watch multiple Twitch streams at once.

If you call yourself a gamer then there is a fair chance that you’re already familiar with Twitch, unless you are from China. For the rest, Twitch is a live streaming video platform where gamers from around the globe live stream their gameplay.

Twitch was launched in 2011 and later bought by Amazon in 2014. Twitch is very popular among the gamers and game lovers which signifies its success. Although some popular well-established companies launched their counterpart to compete with Twitch, none of them gained as much popularity as Twitch.

If someone is live streaming his/her gameplay, people can watch it here. The stream also supports live chat where viewers can interact with the gamer/content creator.

All these features are good but what if you want to watch more than one live stream at once? The reason could be anything, like to compare two gamers’ gameplay and tactics or to watch two different gameplay. The point is, Twitch does not support multiple streams at once. But, there is a website which lets you open multiple streams and you can watch them together at the same time.

SimulTwitch is a free website where you can watch multiple streams at once. You can find a live stream either by its URL or by its channel name. You can watch as many stream simultaneously as your system can handle.

How To Watch Multiple Twitch Streams At Once?

Here is a brief tutorial to show how you can watch multiple Twitch streams together.

To add a live stream simply paste the channel name or URL in the search box present at the top on SimulTwitch homepage. Then press the ‘Enter’ key on your keyboard to load that live stream. Current live stream from that channel will start on your screen along with the chat. When you hover your mouse cursor on the live stream, a toolbar appears at the top right corner. This toolbar gives you options to favorite the stream, show/hide chat, move backward/forward, reload and remove the stream. 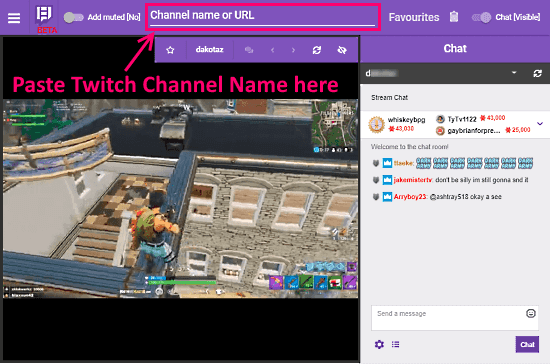 Similarly, you can add more streams to your screen. Depending on the stream number, the playback screen will be divided into respective parts. Chat for each stream will also be loaded as well. You can switch between the chat with the little dropdown icon (refer to screenshot attached below). You get all the playback options like quality, clip except fullscreen mode. 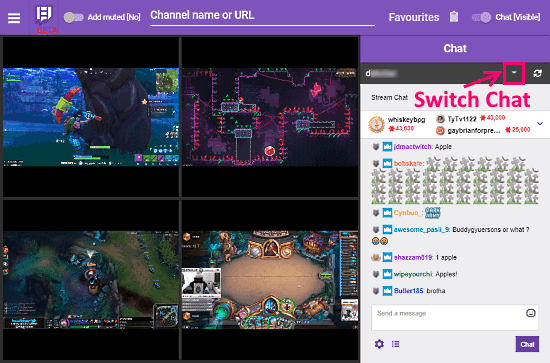 Adding Muted: To mute new stream by default.
Chat Visible: To enable the chat for every new stream you add.
Dark Theme: This website gives you various options to customize the accent and background color, you can choose any given color options as per your liking.
First Stream Muted: Enabling this option will mute the recent stream when you add a new one.
Stream Toolbar: We already discussed this above. It gives you easy access to useful features right on the stream screen. 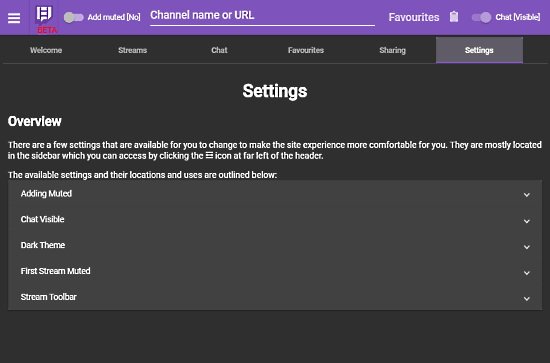 With SimulTwitch, you don’t have to switch back and forth between different tabs of your browser to keep track of multiple streams. You can watch them all together in the same tab at once. Even if you are not going to use it so often, knowing that you have an option for that is good. And, that might lead you to use it sometimes.