Using Named Functions, you can provide Customized Name and Description to the function, and type the Formula Definitions. Once you create a Named Function, you can use it across all the sheets in your workbook. You will also be able to import the created function to other workbooks.

1. Login to your Google Account and create a new Sheet or open a Google Spreadsheet with some existing data to be used.

2. Click on ‘Data’ in the top menu and then click on ‘Named Functions’ to open the sidebar from where you can create the Function. 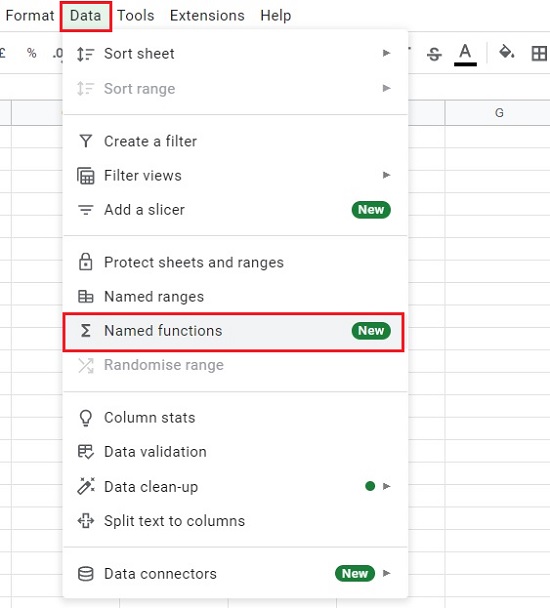 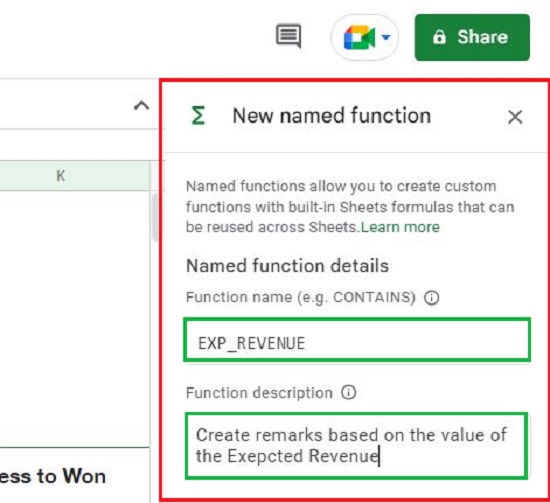 4. Provide an optional description for the function as a good practice which is very helpful for you as well as the people with whom you collaborate on this sheet.

5. Next, type the Argument Placeholders which are also optional but are very important for creating most of the common formulae. For example, you may use a cell or range as an argument depending on whether the function will utilize a single cell or a range of cells as the input. All the placeholders that you type and select will be displayed below with a different color and this comes in handy while creating the formula definitions.

7. Verify all the details in the sidebar and click ‘Next’. This brings up the Function preview screen where you can provide additional details for the Help box such as a description and example of each argument that has been used. Now click ‘Create’ to save your new function. 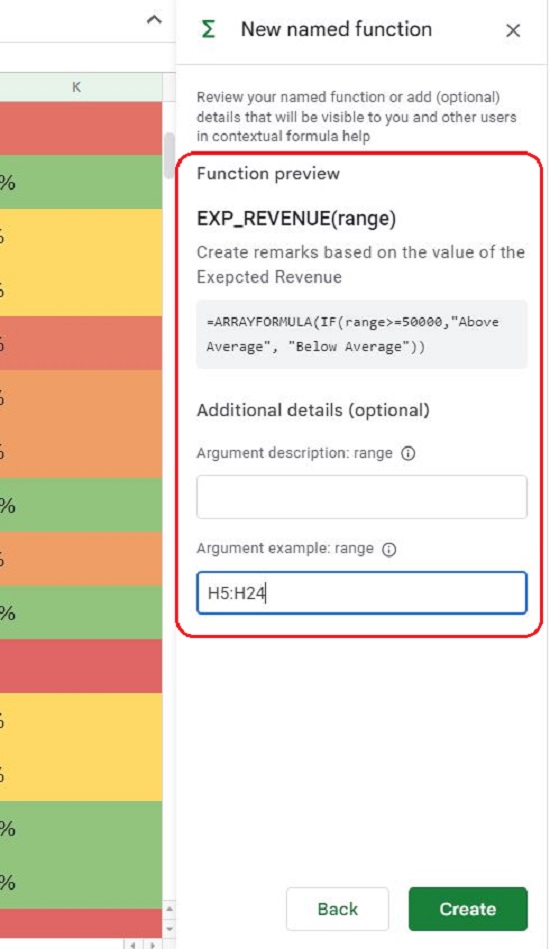 8. Now you will be navigated back to the main sidebar where you will be able to see the function that you just now created.

9. Lets now see how we can use the Named Function that we created above. Click on the cell where you wish to use the output of the Function, type the equal to sign followed by the name of the Function and the necessary arguments and press Enter. If everything is correct you will be able to see the output as expected. 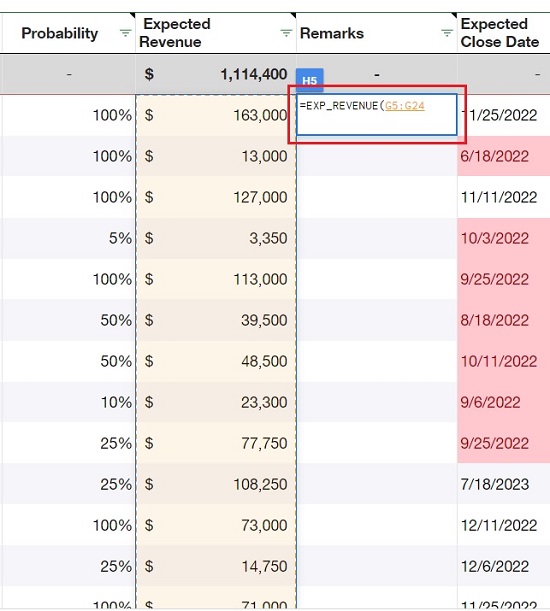 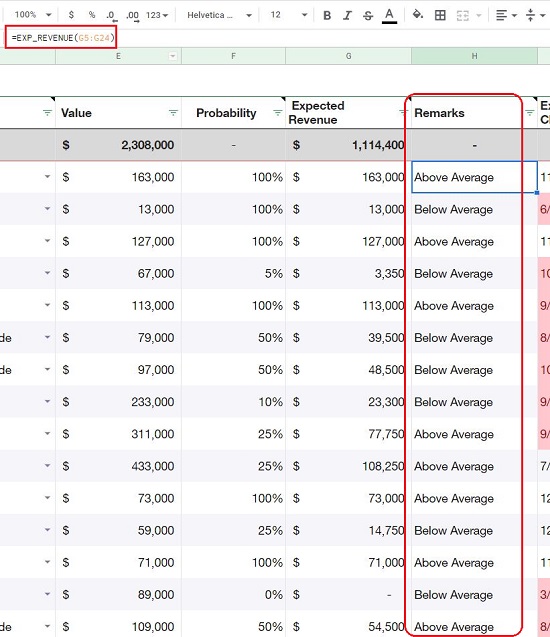 10. If you open the Help box of the function, you will be able to view all the details and information that you entered above. 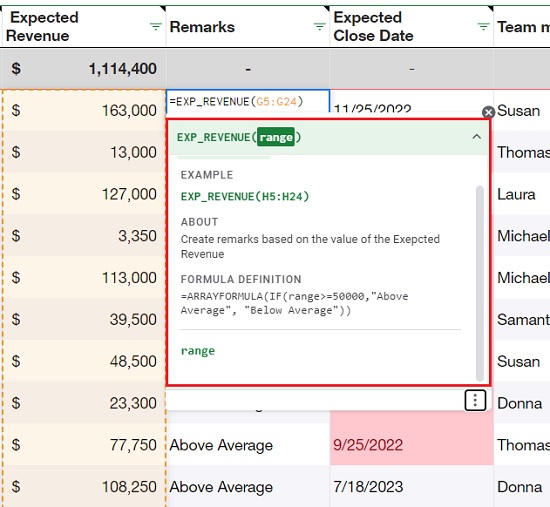 You can use the Named Function that you just created in all the Sheets in the Workbook. But, if you desire to use it in other Workbooks, you will have to import it.

Here are the steps to import the Named Functions in other Workbooks.

1. Open another Workbook sheet. Make sure this is the one where you want to import the Named Function. Like earlier, click on ‘Data’ in the top menu and then click on ‘Named Functions’ to bring up the sidebar. Next, click on ‘Import Function’ at the bottom right. 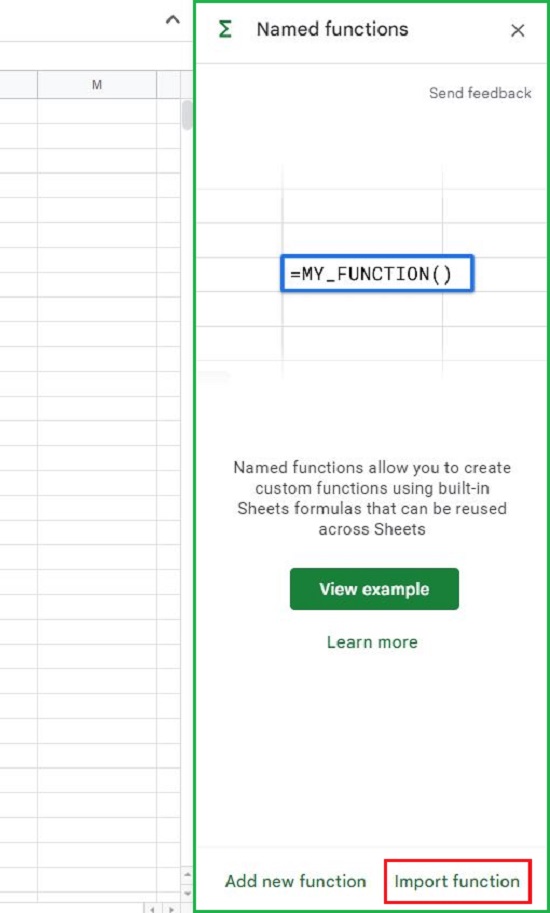 2. Locate the Workbook that contains the Named Function that you want to import. This can be done using the pop-up windows and tabs showing on it. Then click on ‘Select’. 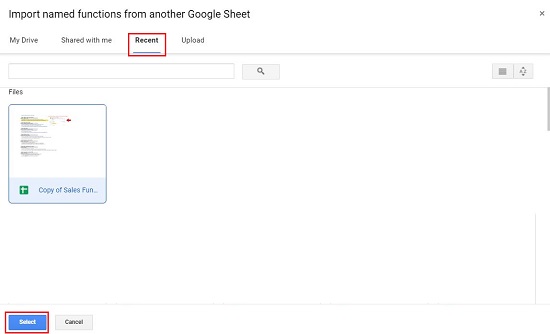 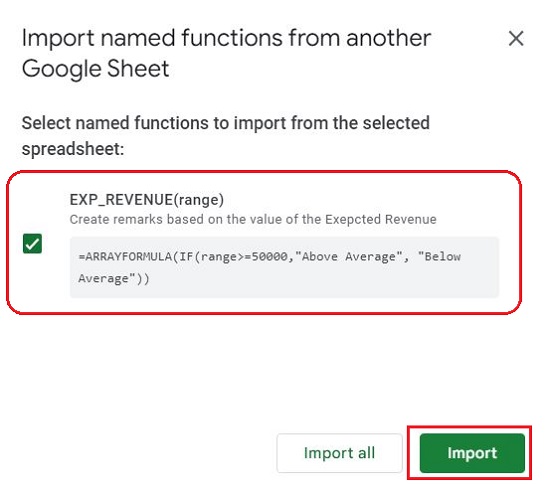 4. All the imported functions will now be available in this Workbook. You can view them in the Named Functions sidebar.

You may have been using JavaScript or Apps Script to design your customized functions earlier. But you should give the Named Functions tool a try as it’s a great feature and extremely easy to use.