Here are 10 free websites to play Rock-paper-scissors online. Rock, paper, scissors (also known as stone, paper, scissors) is actually a hand game which is played between 2 people. But, these websites help you play rock, paper, and scissors game online directly from your PC. You can play with your friend by sharing a link, some random opponent, or alone.

Some of these websites also come with 2 additional shapes: Lizard and Spock. Therefore, it is also known as Rock, Paper, Scissors, Lizard, and Spock game. These two shapes make the game very complicated. So, you can decide if you have to play the classic game or play the game with additional shapes to test your luck and psychology in this game. It’s a good game to pass time and these websites help you play this game alone and/or with your friend.

Rules of this Rock-paper-scissors game are simple:

So, you need to select a particular shape and then the opponent will select another. You won’t be able to see which shape is selected by your opponent and vice-versa. When the result is visible, you both can see the selected shape, and based on the rules, the winner is decided.

Rock Paper Scissors and Bombs (homepage) comes with an interesting interface that I like a lot. There is a bar or slider and half of its portion belongs to you and rest of the portion is for the opponent (or computer). For each portion, there is a bomb placed on the top of the slider. You need to protect your bomb from falling. As you lose, side of your slider is bent down. If you lose continues, your bomb will fall and the game will be over. So, that’s quite interesting and you have the responsibility to save yourself from losing.

The website provides rock, paper, and scissor gestures to play. There are no other gestures, but this classic game is made more interesting with a little change by this website. 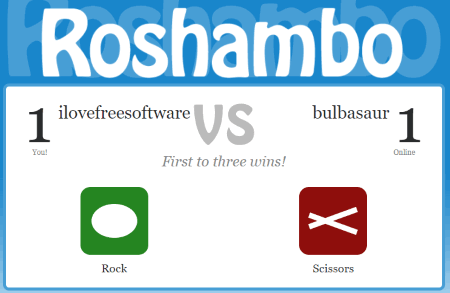 Roshambo is one of my favorite websites to play rock, paper, scissors game online. This website gives the option to play the classic game or rock paper scissors game with Lizard and Spock shapes. Test your luck and game skills using any of these options. Start the game by entering your and opponent’s name. After that, a sharing link is generated that you can share with your friend. The person that earns first 3 points is declared as the winner.

This website also comes with features to store Stats, access to game history, and compete in the ladder system. But, for these features, you need to create a free account on this website. If you don’t want to sign up, then you can simply play the rock-paper-scissors game with a sharing link. 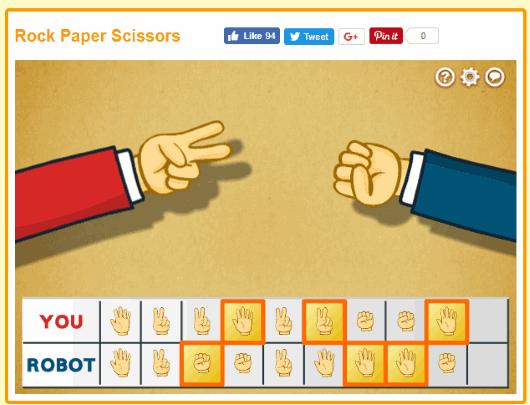 Rock Paper Scissors (by Novel Games website) is one of the interesting websites here. I like the interface of this website, but not the fact that I won just once in 4 games. Here, you play with a robot and there is time limit around 10 seconds to play your move or select a gesture. This makes game a bit difficult because you won’t have much time to think. There are 10 rounds in a game and result is displayed within the game (at the bottom) for each round. The one who wins maximum rounds is the winner. You can also share your result on Twitter, Google+, and Facebook.

This website doesn’t come with Lizard and Spock gestures or shapes. So, chances to win are higher. You can play rock, paper, and scissors using this website by creating a free account or as a guest.

HTML code of this rock paper scissors game is also provided by this website that you can place on your website. 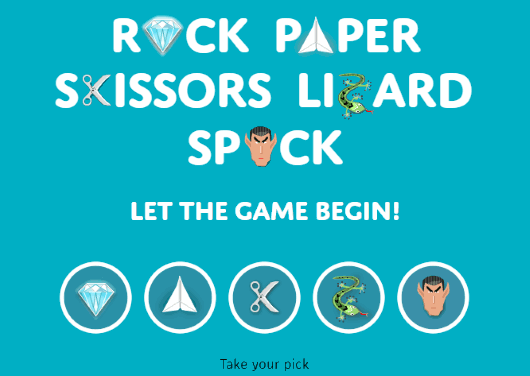 As the name of this website indicates, it comes with two extra shapes (Lizard and Spock) for this game. This website lets you play Rock-paper-scissors with any of your friends by generating and sharing a unique game URL. You both have to select a shape one by one and you get one point if you win and vice-versa.

This website also comes with an option to play with a random opponent, but this feature is in beta mode. The waiting time could be longer than normal. So, the best option is to play this game with your friend using the unique link. 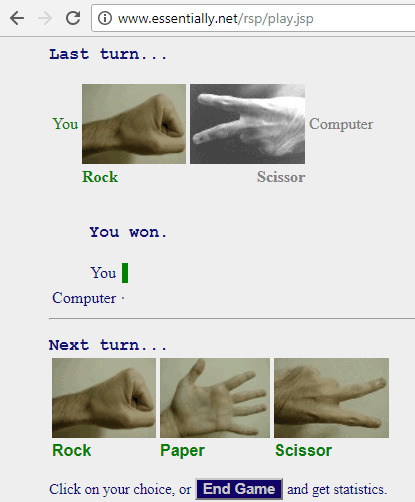 Rock, Paper, Scissors: Humans against AI (Homepage) is also there to help you play this stone-paper-scissors hand game online. Its interface is very simple and it shows the image of the gesture selected by you while playing the game. Computer plays against you and its selected gesture is also visible to you.

There are no rounds and the total number of chances to play the game. You can end the game anytime. When the game is ended, you can also see stats to check how good or bad you were during the game play. You can see the total number of wins, lost, tied, win/loss ratio, etc. So, if you need a website that can help you play Rock-paper-scissors game online along with Stats, then you should try this website. 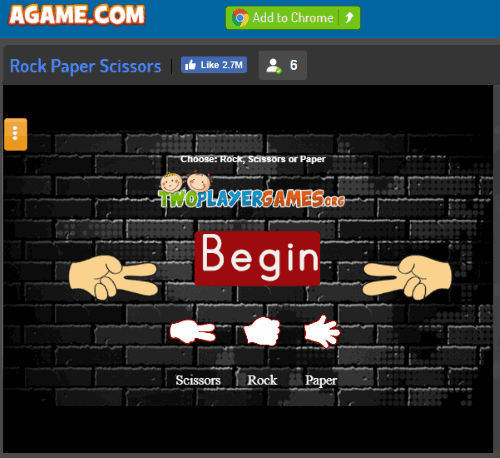 Agame website comes with straightforward purpose, which is to play Rock Paper Scissors game. You don’t have to create some sharing link or wait for the opponent to join the game. Just open this website and begin the game to play with CPU. There is no time limit to select the gesture. Also, it presents only the classic rock paper scissors game.

If you get 3 points first, you win the game, and vice-versa. Its interface is very simple. You just need to select a gesture and CPU will do the same. If you win, you will get one point and the game continues till result. 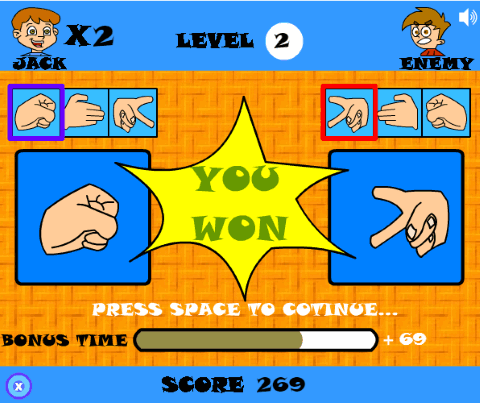 Another simple website in this list to play rock paper scissors game online is Bigfishgame.com. Just like the above mentioned website, it lets you play with CPU as an opponent. The difficulty level is moderate in starting, but it increases level by level. There is a slider, which works as a time limit, to select your gesture.

You get only 3 points and if you lose all those points, the game is over. You need to win the game and check how many levels you can clear in just 3 chances. So, it’s a good website to play rock paper scissors online. 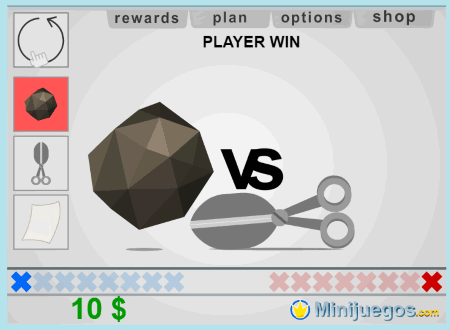 If you want more than rock, paper, scissors, lizard, and spock game, then this Play Advanced Rock Paper Scissor website is definitely a good choice. In this website, you can either play with computer or with your friend. What makes it different than other sites in this list is there are some other shapes also available, such as wood, shield, box, diamond, etc. I wasn’t able to figure out how other shapes affect the game, but the opponent was using them and I was losing the game badly. May be, those shapes can be earned as you win the game. I was helpless and able to use only rock, paper, and scissors.

This website also comes with levels mod, but you need to unlock that mod by starting with 1 player or 2 player game. In the game, you will have 8 chances and you earn $10 per win (only for game, not in real). Try to win the game to unlock levels mod. And once levels mod is unlocked, you can also unlock reflection mode.

The website doesn’t provide any help section or FAQ to understand what we get in rewards, levels mod, and reflection mode. So, I guess it will be clear when you will play and win the game. 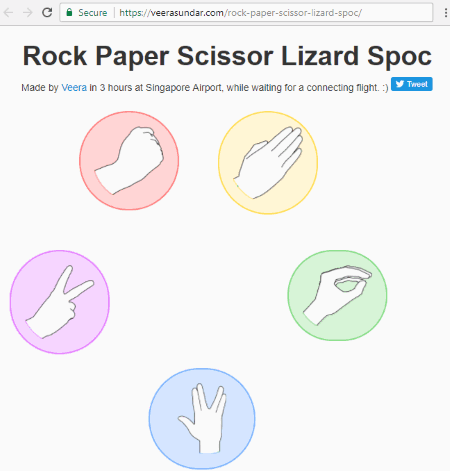 The name of this website (Rock Paper Scissor Lizard Spoc) itself clears its purpose. This website lets you play rock-paper-scissors online with two additional shapes (Lizard and Spock). This makes the game tough and my lost ratio was greater than winning ratio. I’m not so good in this game, but I believe you guys can do that easily.

There’s a bot or computer that plays as an opponent. You will be given 5 shapes that I already mentioned. Select a shape and the opponent will select another shape, and the result is shown based on the rules.

There are no levels, chances, or rewards. Just a simple rock paper scissors lizard spock game to test your skills. 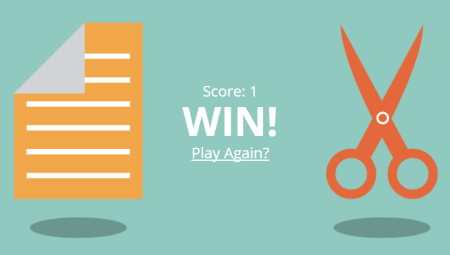 This is the simplest rock-paper-scissors website in this list. Here is the homepage of this Rock-Paper-Scissors Game website. There is only one-time game, no levels or rounds. You will have to choose from one of the three shapes (Rock, Paper, and Scissors). After that, CPU will choose a shape and result will visible to you.

When one game is completed, another can be started. This is all you can do on this website. If you need a very simple website that can help you play Rock-paper-scissors online, then this is a good website to try.