Stickersaur is a free Android app to convert photos to stickers. You might have come across or have used various sticker apps for Android, which allow you to add stickers to your photos. But this sticker app is quite unique as it allows you to create your own stickers from your favorite photos. You can simply import a photo from your gallery or from the web and turn it into a sticker in no time. It even comes with a built-in camera using which you can capture a photo and convert it into a sticker instantly.

So, if you want to turn your own photos into stickers instead of adding pre-designed stickers to your photos, then you got to try Stickersaur. Similar to another app called “Bobble” for Android, you can use this one to create hilarious stickers with your own face and share them with the world. 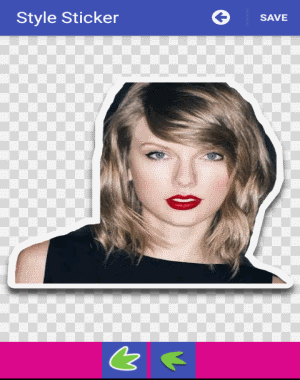 How to Convert Photos to Stickers on Android:

Step 1: After you install and launch Stickersaur, you’ll see 3 different buttons at the bottom of the main screen. These buttons can be used to capture a photo using the built-in camera, import photo from gallery, and search the web for photos. 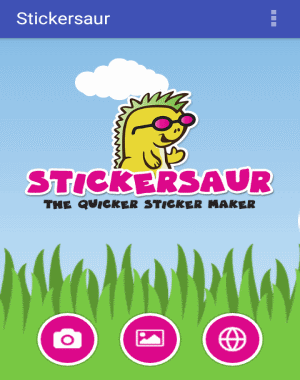 Step 2: Let’s say you want to import a photo from the web, then simply tap on the “Web” icon and search Google for any photo. After that, press and hold on the photo to import it for editing. When the photo is selected you’ll see 2 different options named, Use and Cancel at the bottom. 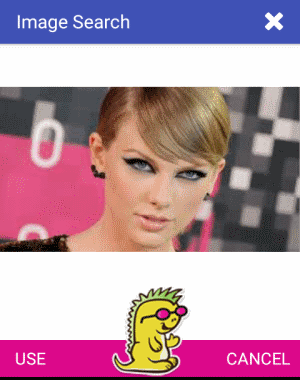 Step 3: To get started with creating the sticker, tap the “Use” option to open up the editor. At the bottom of the editor, you will see only 4 editing tools along with a undo option. 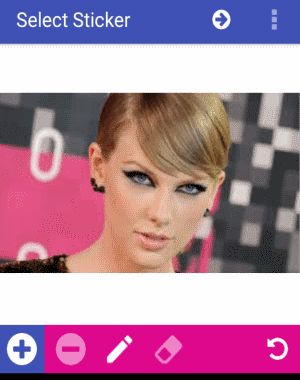 Step 4: Selecting the “+” icon on the toolbar will allow you to draw a line on the object which you want to convert into a sticker. However, the “+” tool is not so accurate and it will only trace your finger to keep the area included (roughly) in the sticker and exclude the remaining parts. If you mistakenly include some unnecessary area of the object, then tap on the “-” icon and draw a line on the area which you want to exclude (roughly). 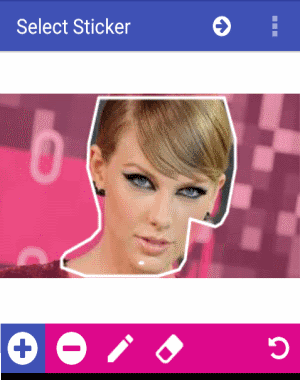 Step 5: As both the “+” and “-” tools are not so accurate and they select the object area roughly, you can go ahead and use the “Pencil” and “Eraser” tools to give a touch up to the object area. These tools allow you to refine the object border by simply sliding your finger across the border line.

Step 6: When you’re done selecting the object perfectly, tap the “Arrow” button at the top to proceed. The app will automatically fetch the object area which you have selected and remove the remaining parts from the sticker. Now, you’ll be able to add a bold white border to the object or give a shadow effect along with the bold white border. Once you’re done, simply tap the “Save” button to save the sticker in your photo gallery. 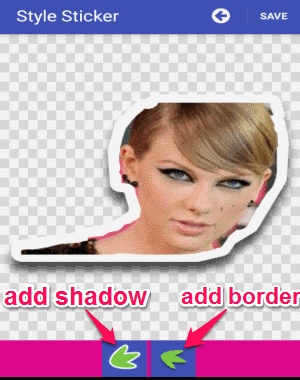