In addition to that, the app has built-in integration with Wikipedia, Amazon, and Bing Image Search. They will help you see more details about the celebrity, buy products related to the celebrity, and see more images of the celebrity. If the app fails to identify any celebrity from his/her photo, then you will see an option to post a tweet asking for who the celebrity is. 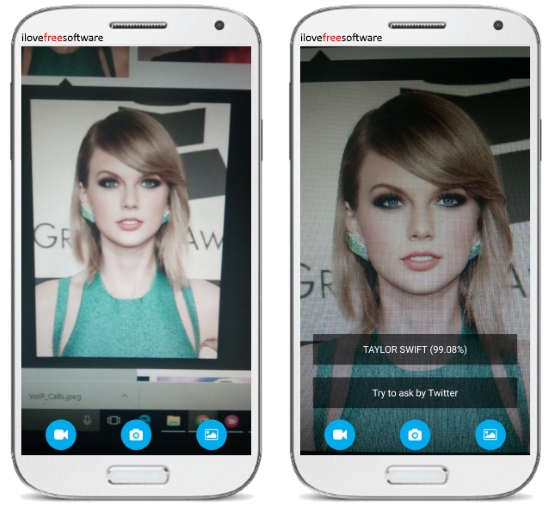 How to Find the Name of a Celebrity from his/her Photo:

After you install “WhoCamera” on your Android phone, simply open it up and then you will see a built-in camera on the main screen. At the bottom of the camera, you will see a button to take photos and another button to import existing photos. There will also be a “Video” record button, but it doesn’t work.

Now, if you would like to take a new photo of any celebrity while watching TV or movies on your PC, then simply point the camera at the screen and press the “Photo” button. Or you can tap on the “Import” button to select an existing photo from gallery, as shown above. 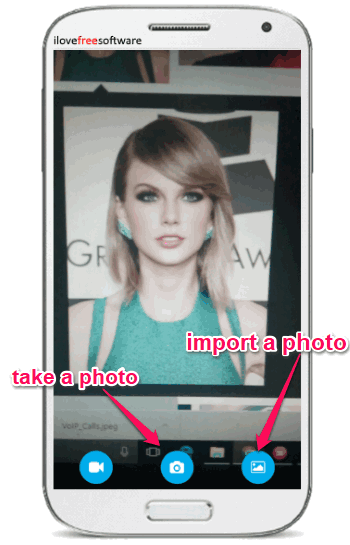 After you import or take a new photo, this app will automatically start analyzing the photo. Once it is complete, it will show you the name of the celebrity. It will also show the match percentage using which you can determine whether the app is showing the correct result. 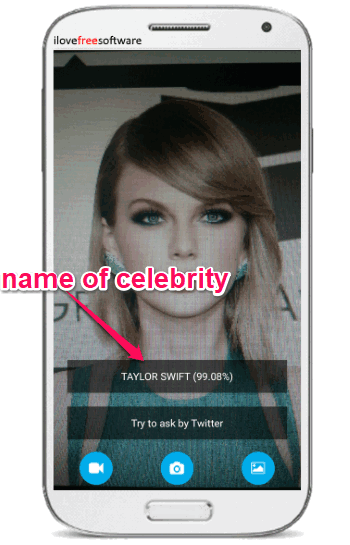 If the app fails to identify the celebrity, then you can use the “Try to ask by Twitter” option to post a tweet and ask Twitter users to tell you the name of the celebrity.

Apart from finding the celebrity name, you can also read more about the celebrity on Wikipedia, check out products on Amazon related to the celebrity, and browse through tons of others photos from Bing Image Search. For this, all you gotta do is tap on the name of the celebrity shown by the app. After that, a new screen will appear with three tabs named, Wikipedia, Amazon, and Image. 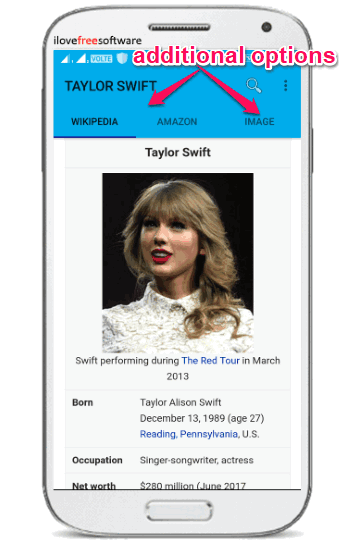 WhoCamera is a very interesting app as it makes finding the name of a celebrity from his/her photo fun and simple. This app does have some bugs. As per the description of the app on the homepage, you can point the camera towards the TV and then it will automatically analyze and show the celebrity name. But, I was unable to do that. May be the mistake is at my side or this feature is not working at all. At the bottom of the main screen, you will also see a “Video Record” icon, but I have no idea what it does as tapping the icon does nothing.