What is a Ramdisk?

Ramdisk is a virtual disk drive created in the RAM (Memory) installed in your computer. You can assign a name to the drive, a letter to represent and access it and even format and store data in the ramdrive as you would do with a normal hard disk drive or a removable media connected to the computer. The time taken to access data stored in a ramdisk is much less than in a normal hard disk drive. The reason for this is because the ramdisk is a virtual disk created and kept separate to be treated as a disk drive in the memory (RAM) and not actually allocating any space on the hard disk. The data in the ramdisk is volatile i.e. it is removed once you turn off your computer. However, there are ramdisk software that will make it possible for you to save the data on to the hard disk before you turn off your computer. The ramdisk created with a ramdisk software can always be accessed from the “My Computer” icon where all drives are displayed.

What is the Use Of Ramdisk?

This is a question for which I am myself struggling for a practical answer. Theoretically, if you have a program that you need to launch quickly, or program creates and access some small files often, then you can load such program to Ramdisk and the program would start instantly and would work at quite a fast speed. However, the fact remains that Windows already uses RAM to cache files, including files created by such a program. And loading an entire program in RAM would reduce the available RAM for other Windows program, which could actually slow down the Windows as a whole.

So, is there a practical use of Ramdisk? I am sure there would be some; it’s just that I haven’t been able to find one, and I have tried hard thinking about one.

We will talk about 4 free ramdisk software that let you create a ramdisk on your computer, delete them and even save the information on to the hard drive. Note that some of them would require you to go through a registration process, but that it going to be free. 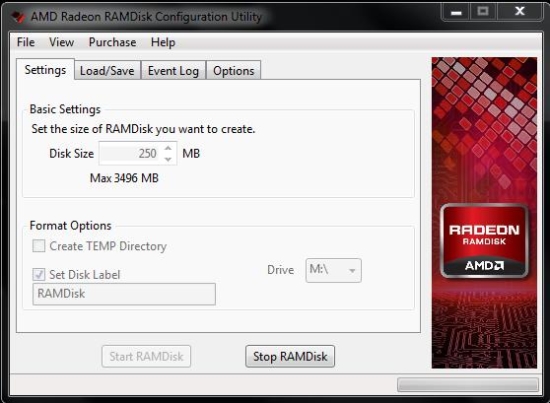 The free version of AMD’s Radeon Ramdisk lets you create a ramdisk of up to 4 GB. You can choose to assign a drive letter, choose the Disk Label and Save the data on the ramdisk to a local drive. This ramdisk software also allows you to load a previous ramdisk image when you start Radeon RAMDisk. You can choose the location and file name for the image file from the “Load/Save” tab. The image file is where the data will be saved once you choose to close Radeon RAMDisk.

Get Radeon RAMDisk here for free 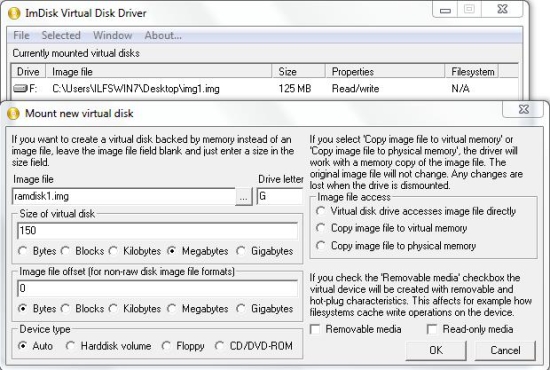 ImDisk Virtual Disk driver can create virtual floppy disk, CD/DVD or hard disk using the RAM or using an image file. You can access ImDisk Virtual Disk Driver from the Control Panel or you can use the command line version of the tool too. This ramdisk software also lets you right-click on any file and use it as a ImDisk Ram disk image. You can save the data on the ramdisk to an image file too. You can also create a disk that acts as a Removable Media or make it a read-only drive. 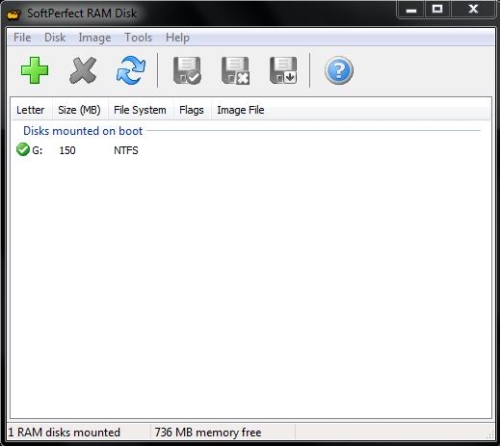 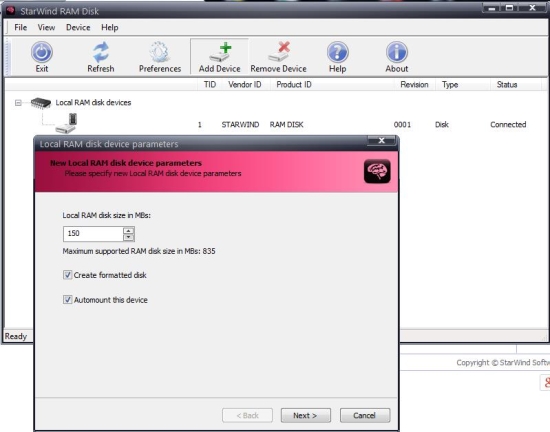 StarWind RAM Disk is another free ramdisk software. To download the free version of this software, the website requires registration. It allows you to create ramdisk with an option to create pre-formatted disk and automatically mount the device so you can use it right away. It does not provide much options and has a simple interface that displays the ramdisk’s information. It does not have an option to let you save the data on to an image file however you can always right-click on the created ramdisk drive and choose “Copy” and paste the entire drive to another location.

Ramdisk is a good concept and Ramdisk software let you create Ramdisk on your PC and try it out. Ramdisks can come handy when you want a drive where data can be stored temporarily with faster access time and should perish when you shutdown your computer. Because most of the ramdisk software allows you to save the data on to an image file, you can retrieve the data that existed on your ramdisk. Developers can use a ramdisk to emulate the behavior of  an actual hard disk drive, CD/DVD drive or a floppy drive, write to it and make changes without affecting the actual hard disk in any way. However, if all this is actually useful, remains a big question that I am yet to find an answer for.