To fight the DDoS attacks, Linode offers advanced DDoS protection globally for free. Before getting into details, let’s quickly cover up DDoS attack and Linode itself. DDoS Stands for Distributed Denial-of-Service. In this attack, the targeted device, server, or network is flooded with internet traffic via malicious attempt that leads to traffic clogging and prevents regular traffic. Such attacks are used used to disrupt the service of the targeted machine and can also lead to data exploitation. The massive cyberattack WannaCry was a DDoS attack that caused billions of dollars in economic loss globally.

Now, coming to Linode, it is a cloud hosting service that provides computational and storage infrastructure. It leases computation resources for business or personal use along with a secured cloud storage space. All the services of Linode are secure and encrypted but there was no protection against this severe cyber attack. Linode is the first cloud hosting service that offers advanced DDoS protection and it made it a part of their security without any additional cost. 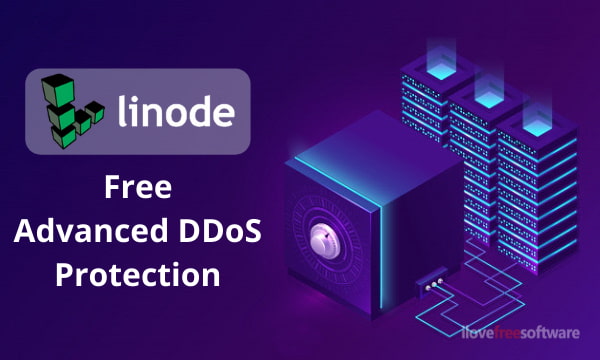 Also read: View Cyber Attacks Happening All Over The World In Real-Time

Cloud infrastructure is an important part of the digital world, it keeps the internet running. Since the internet relies on cloud infrastructure so do businesses, websites, and individuals all over the world; it has to work perfectly almost all the time. The minor downs and maintenance with prior notice can be easily dealt with. But a DDoS attack can clog the entire network and infrastructure leading to a complete shut-down of all the services. This not only harms the infrastructure and data but also affects the people who are depending on it. So, having protection against such attacks is a must.

There are many CDN (Content Delivery Network) services that offer protection against DDoS attacks along with all other security measures. Cloudflare is a popular service that offers DDoS protection. But these are CDN services; they don’t offer computational infrastructure and hosting. So, you have to lease the infrastructure from hosting services and then use a CDN on top to have protection against DDoS attacks.

Linode already offers all the essential security measures on its infrastructure. And, now by having built-in DDoS mitigation, it eliminates the need for a CDN service. Linode has 11 data centers all over the world and all those servers now have built-in protection against DDoS attacks. This DDoS mitigation provide protection against various types of DDoS attacks including HTTP floods, SYN, UDP, and more. 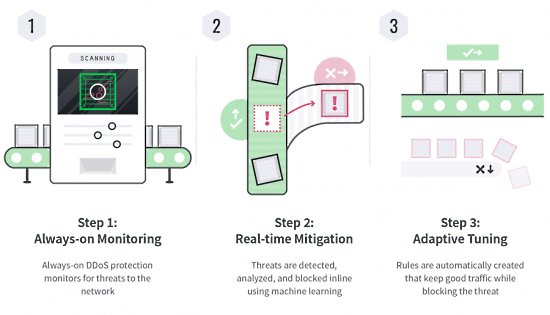 This new advanced DDoS protection is a 3-step process. It monitors the infrastructure traffic all the time for malicious behavior. Whenever it detects such threats, it uses machine learning to analyze and block inline. If the traffic is increased, it distributes that to its global fiber backbone. Based on the threat detection, the ML algorithms automatically creates rules to block further threats and keep the regular traffic running. This not only helps to minimize the impact on the infrastructure but also keep the traffic running. For more details, you can read the Linode’s official press release here.