This article covers a simple method to convert dangerous PDFs, Images into Safe files for free. Some PDFs and Images files are used to inject malicious program(s) to a system. When opened, such files instantly run the malicious program on the system that can be harmful in many ways. Generally, Windows Defender and other Antivirus programs can easily identify such files and alert the user about that. But if a file has some essential data but marked malicious then here is a safe method to recover it.

Dangerzone is a free software that can convert a dangerous PDF and image file to a safe file. This software opens the malicious file is a controlled environment where they can not access the system and connect to the network. This way, even if a malicious code is executed, it won’t harm your system. And, once the file is open, Dangerzone can access the data in it and convert it to a safe file without the malicious code. So, let’s check how it’s done. 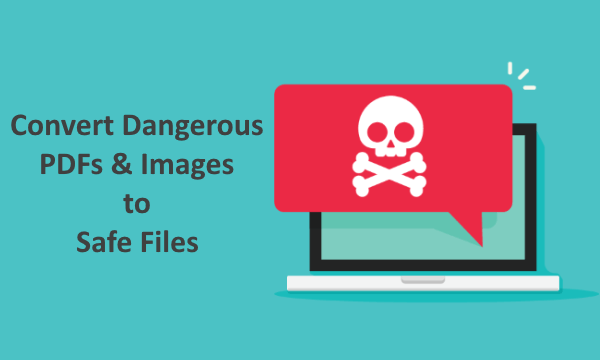 Also read: How to Run SQL Queries on PDF Files?

There are a few prerequisites to get Dangerzone working on Windows PC. First of all, make sure that Hardware-assisted Virtualization and Data Execution Protection is enabled in the BIOS. After that, install the Docker software on your PC. Docker creates a controlled environment for development and testing purposes and this software uses that to open the dangerous file.

After that, simply download Dangerzone software from the link given below and install in on your PC. When you run this software, it asks first checks for the prerequisites and installs the Docker if not installed already. After that, it asks you to pick the dangerous PDF or image file that you want to convert to a safe file. 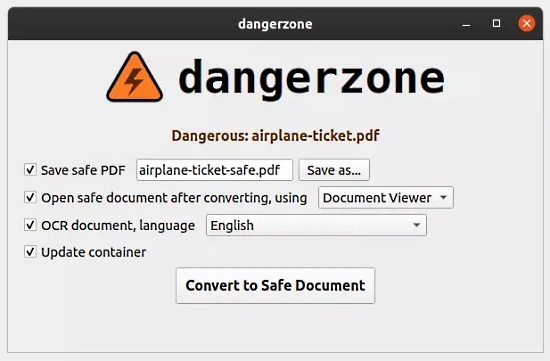 When you pick the file, you get an interface like the one in the attached screenshot. At this point, this software opened the dangerous file in a Sandbox using Docker. The sandbox in Docker is isolated from the rest of the system with no internet access. Even if the file executes malicious code, it won’t have any effect. Meanwhile, Dangerzone fetches the data from the file and extract it to save as a new safe file.

It gives you options to save and rename the file along with an OCR feature which you can use for PDFs and images with text. The OCR is available in multiple languages. Now, select the desired options and click the “Convert to Safe Document” to get the safe file. Apart from PDF and image, you can use this software to recover Microsoft Docs, Excel, PowerPoint, ODT, ODS, ODP, and ODG files as well.

Dangerzone is a useful software that allows you to extract the essential data from dangerous and malicious files. It eliminates the chances of putting your system and thus your security at risk and allows you to access the actual data from a file. On top of that, if you have the prerequisites, it’s quick and simple to use.