Candy count is a free game for iPhone and iPad for kids which has the capability of teaching students how to count, regarding colours and basic operations such as less than or more than. Since candy count is made for kids, the music of the game is kept very jolly and the voice of the narrator is also somewhat teacher like. Also, so that children cannot change the settings, a provision for that has been made too. Once you tap settings you are given a problem to solve so that only an adult can enter that.

The game also supports many languages so that your child can learn in native language if you want. 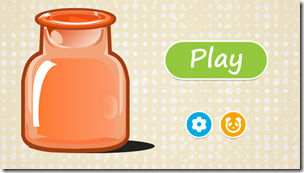 The game, since meant for kids, is kept very basic. It begins with a child shaking a bag of candies. Some candies fall out of that bag and the game begins. The candies are strategically used in the game as it is something kids can relate to. The next step for the child is to arrange the different colour candies in the jars of same colour. Also on each successful transfer of the candy to the bag, the colour of the bag is repeated which makes a deeper impression in the mind of the toddler. 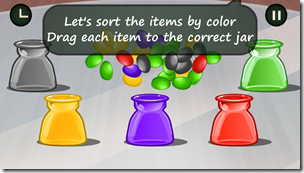 After this, the child is given the task of counting the candies in each bag. The counting is done along with the narrator. After this task is completed, the child is asked a few questions by the narrator. Questions are such as, “which bag has the least number of candies?”, “which bag has the most number of candies?” The game has taken into the account the fact that each child has a different mental level. This is why you can change settings of the game which will lead to change in the number of colours child has to deal with, it can also change the maximum number child has to count to.

Also, I’d like to mention, that for each correct answer, there is an applause and praise by the narrator which further boosts up the confidence of the child. 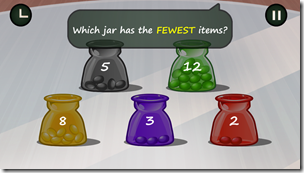 In this new digital age, Candy Count is a strong tool to teach your child the usage of a gadget and as well as basic counting and colour recognition skills. Also, this is an interactive way of teaching the kids without much human intervention. If you are in the same stage of life, this is a must download app for your kids.