ClearLock is a free Android app to block access to distracting apps while you’re working. Sometimes you might have some important work to do, but your focus is more on switching colors, playing clash of clans, browsing Facebook, posting selfies on Instagram, etc. In that case, this app can come handy as you’ll be able to block all these apps and games for a specific period of time and concentrate more on your work. No more wasting time with all the distracting apps and games when you are supposed to work.

To block access to distracting apps, all you got to do is select the apps and specify the time period. Once you block the apps, they will not be accessible until the timer runs out. However, you can reboot your device before the block time is up and unblock all the apps if you think they are more important than your work.:) 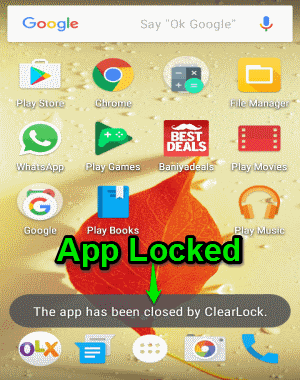 Alternatively, if you want to block an app which uses your Internet connection, then you can go ahead and check out our post on How to Selectively Block Android Apps from Using the Internet.

How to Block Access to Distracting Apps on Android While Working:

Step 1: After you open the app, tap on the give permission dialog and go to “Apps with usage storage” settings and then enable ClearLock. That’s all, you’re now all set to start blocking access to distracting apps.

Step 2: After that, the main screen of the app will appear where it will ask you to select the apps which you want to block. All the preinstalled and downloaded apps will be listed, and you can select either and block access to them. 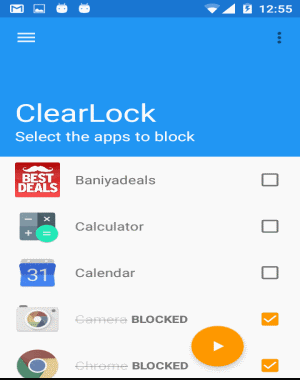 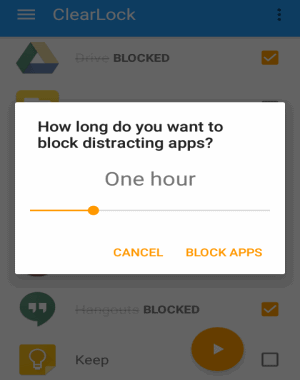 Step 4: When the apps are blocked, you won’t be able to modify the settings or use the apps until the assigned time has ended. It will also display a warning message on the main screen of ClearLock along with the remaining time, after which the apps will be unlocked. 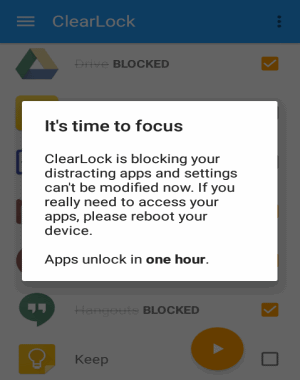 Step 5: Now, whenever you’ll try to launch any of the blocked apps, it will automatically close and pop up a message saying “the app has been closed by ClearLock” as shown in the very first screenshot.

Step 6: There is another interesting feature of this app called “Schedule Lock Sessions” using which you’ll be able to schedule blocking access to distracting apps. But, the catch is that this feature is only for PRO users and you’ve to upgrade to the paid version of ClearLock in order to use the feature.

Let’s say you’re addicted to apps like Facebook, Instagram, Twitter, etc. and also happen to have important works which need to be done urgently. Well, in such situation you can use this app to block access to all these apps and ultimately focus more on your work. The setup is super simple, as all you got to do is select apps and define the time period for blocking access to the apps.