Anti-Exploit by MalwareBytes is a tool that protects users from browser threats. It protects your browsers from all the potential exploits, which directly or indirectly affect your browser’s plugins like Adobe PDF reader, Foxit reader, Microsoft office word, excel, powerpoint, media players like Windows media player, VLC player, QuickTime, Winamp etc. Most of the malicious files are hosted on web, and attackers are looking for vulnerable users to access them so that they can exploit those users. Anti-Exploit from  MalwareBytes protects you from these kinds of malware attacks. Have a look at how it looks. 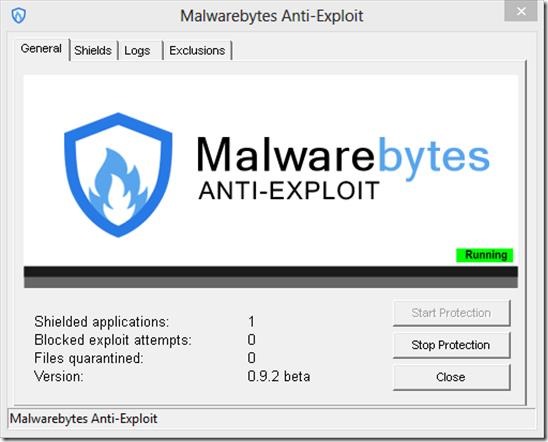 The Beta version of Anti-Exploit is free to download and it is very easy to install. Once you install Anti-Exploit, it will start running just like a normal antivirus program. You have an option to Stop the protection if you want. Anti-Exploit was previously known with the name of ExploitShield by ZeroVulnerabilityLabs. Now this company has been taken by Malwarebytes and they renamed ExploitShield to Anti-Exploit.

It shields major browsers like Mozilla Firefox, Opera, Google Chrome and Microsoft’s Internet Explorer, plugins like Adobe reader, acrobat, Foxit reader, Microsoft word, excel, PowerPoint and more. Have a look at below screenshot to see the major plugins it supports. 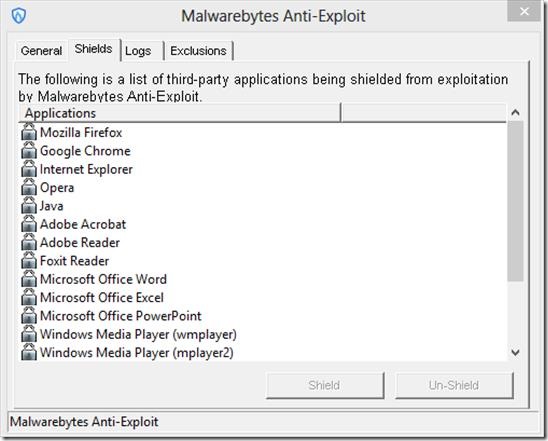 It is an extremely easy application which requires minimum monitoring. You can just install it and forget about it, and it will keep working in background. You wont even notice that Anti Exploit is running as it takes very less system resources. It won’t hamper with your system’s speed like most of other antivirus programs do. Whenever you will be working with any of the browsers, it will be working in the background to make it secure to use. You can see the logs with the description under the Logs tab. 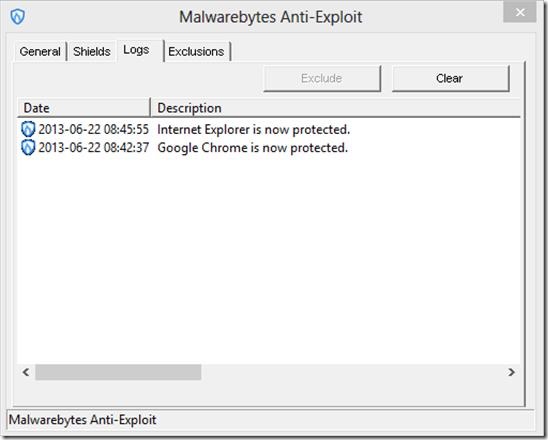 Anti Exploit is a limited tool and does not offer any other feature. This is because it is still in its Beta phase. It can be considered a small utility that runs in background and you will not even feel its presence.

MalwareBytes Anti-Exploit is a simple and easy way to protect yourself against malware attacks that comes when you browse, or download. You don’t have to configure anything, as it completely starts working as soon as you install it. It blocks malware exploits like Phoenix , Sakura, Incognito, Blackhole and does not require any updates. As it is in its Beta version, you may face some bugs while using it. You can get MalwareBytes Anti-Exploit from this link.