Naqala is a strategy based Windows 8 Board Game. In this Game your main aim is to gather more and more stones in the bowl you are given. You can play the game against your friend, or can play against the computer. The game can be played in 6 different levels, where the difficulty of the game increases with each level, six being the most difficult.

The game challenges your strategy making skills, and engages you into itself, and ensures long hours of game play. The game also gives you the option, by using which you can change the background of the game while playing. 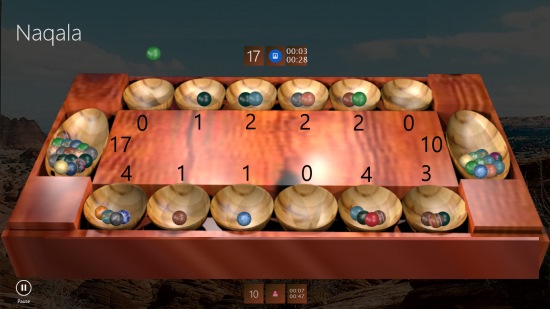 Naqala is freely available in the Games category of the Windows store.

Playing this Windows 8 Board Game

Naqala is quite addictive board game. I can ensure that, you will get more and more involved with it. Naqala is an Arabic word that means “‘To Move”, and so is the game. The game is:

As you get to the game, firstly a game board would be shown to you. On two of the opposite sides, that is, one alongside you and other on its opposite, will have six bowls available. Two large bowls are available on the other two opposite sides. Now, 48 stones are included, with 4 each for every small bowl. The aim of the game is to collect the larger amount of stones in the large bowls. The bowl available on the right side of each of the players belong to them. 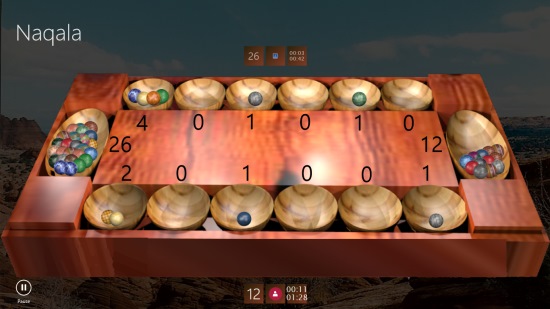 While playing, a timer will also be shown to you from which you can see your progress.

The game has 6 levels to play, for which the difficulty level gradually increase. You can enjoy this game against your friend, or can play against the computer. No matter how you play, the game will ensure you a good experience every time you play it.

According to my experience with the game, Naqala is quite a fun and intriguing Windows 8 Board Game. Once you understand the rules, this game is one tough game to get away from. Try it for sure, and do let us know about your experience.