NPointer is a free software to control your PC via gestures and voice. It uses a web camera attached to your PC or laptop and identify gestures that you make by your hands or head. It captures the movement and direction of your gestures and moves cursor accordingly. And when you want to click something at that point, just hold your hand and it will immediately show a menu to select various mouse operations you can do there, such as click, double-click, right-click scroll, etc.

You can also command this software via voice input. First you have to assign some voice notes to mouse events such as to click, double-click, drag-drop etc. Now when you speak that command, NPointer will identify it and will perform the action that is bound to it.

Although you can find another software that support voice command and hand gestures but NPointer is pretty advanced. Lets see some of its features in details.

NPointer lets you control your PC with hand gestures. As you move your hand in front of webcam, it will also move the cursor in the same direction. And when you want to click somewhere on the screen, just reach there and hold your hand. After sometime it will show you a group of options. You can click on the required option. 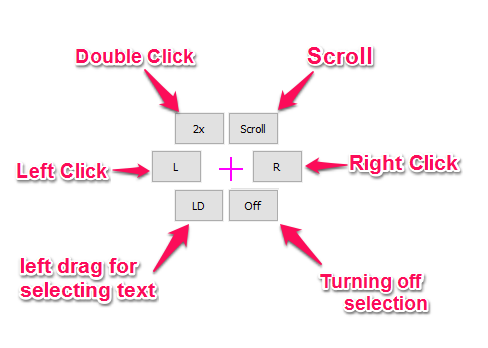 Make sure that there is enough light in he room other wise the frame rate will start decreasing and then gesture will not be recognized accurately.

Control your PC with Voice Commands

Another noticeable feature of NPointer that is quite interesting is, it lets you control your PC via voice. To do this, you have to first feed a voice note sample in the software for all the mouse events like, click, double-click, scroll, drag-drop, selection.

Once you have specified all the voice commands, you can use them or change them later. To use voice commands instead of hand gestures, you have to un-check the Camera Control and check the Voice Control option. So, in this way you can control PC via voice commands. 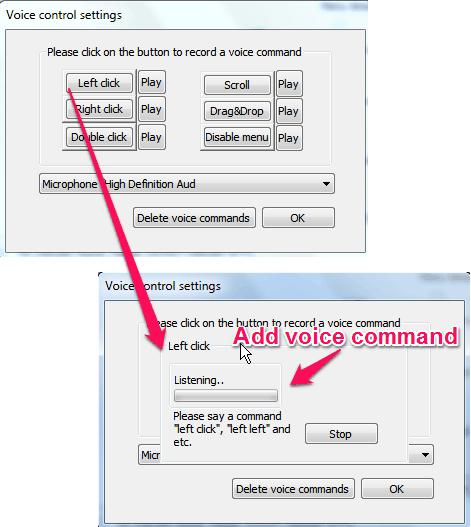 This method didn’t work very precisely for me; probably it needs more training for voice recognition.

In NPointer you can control  many parameters of the gesture control. You can control the speed of movement, delay between opening action menu and idle gesture, etc. There are some custom preferences that NPointer gives you. If you don’t want to modify them, let them be as software defaults. 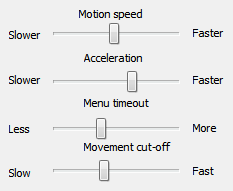 NPointer is a free and portable software.  It can be useful for the people who are differently abled and still want to use computer, then NPointer is a good option for them. Also if you want to control your computer with hands gestures and voice commands, then give it a try. Download it from the link given below.