MD5 Calculator is a free md5 calculator that generates md5 hash for a file. Now you must be wondering what MD5 is. To put it in simple words, MD5 is an algorithm used to generate a unique string of letters and digits for a piece of text. As the md5 calculator is unique (under ideal conditions), you can use it to check the integrity of a file or a piece of text. Consider it as a seal that you have on tamper resistant packing for a product. With md5 hash, you would know if a file is tampered or not because the md5 generated for the tampered file would be different from the original file. 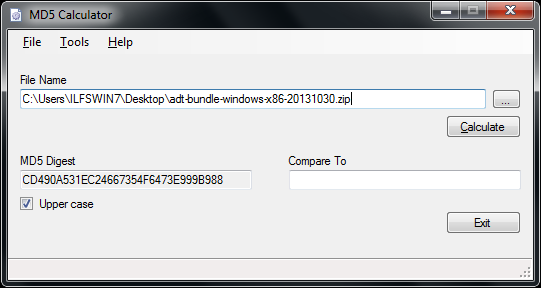 How to use MD5 Calculator?

MD5 Calculator is simple and useful tool while you’re sending an important document over to another person. MD5 Calculator can be used to confirm the integrity of the file and to make sure that it is not tampered with. MD5 Calculator attaches itself to the context menu that makes it even more easier for even user (like me) who doesn’t know much about md5 hashes to even use it to verify files. This makes MD5 Calculator different from it’s variants who choose the command prompt as their operating environment. I used this md5 calculator with Windows 7 and it’s works well for me. Try this out.

Get MD5 Calculator here for free