Did you ever try Windows 95 or want to? Then, here is a simple way to run Windows 95 on Windows 10 as an app or lower versions of Windows, Mac, and Linux operating systems. This is done by an engineer at Slack and the work is appreciable. All the items that were used to ship with Windows 95 are present in this app.

You can open Start menu, access Control Panel, use WordPad, Notepad, Calculator, play Minesweeper, etc. The app works pretty good in Window 10 but I’m not sure about the lower versions. Almost all its features work except Internet Explorer. You can open IE but it won’t help you open any webpage. 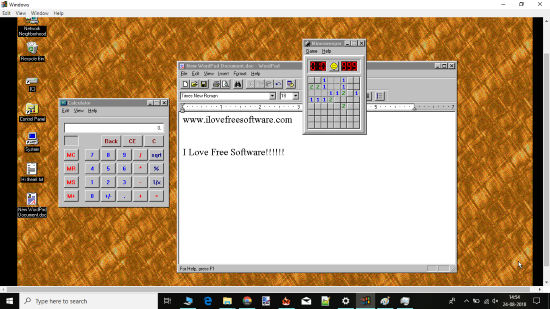 In the screenshot above, you can see interface of this Electron app where Windows 95 desktop is visible. Apart from that, I also opened WordPad, Calculator, and played Minesweeper.

Everything is pretty simple. To run Windows 95 on Windows 10, simply download the EXE of this Electron app. Its download link is given at the end of this review. Its EXE file is 128 MB in size and it requires two double clicks only.

As soon as you do that, app interface is opened. There you will see options to Start Windows 95, reset machine & delete state, insert floppy disk, and discard state & boot from scratch. Use the first option. 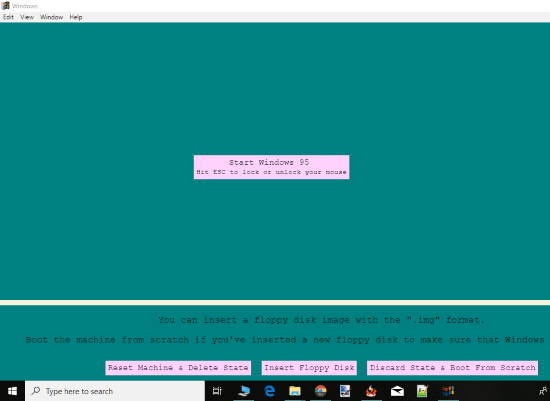 Now it will boot Windows 95. After that, the desktop will be visible where you can see Notepad, some desktop shortcuts, Start button, taskbar, etc. All the basic items that are a part of Windows 95 is there. 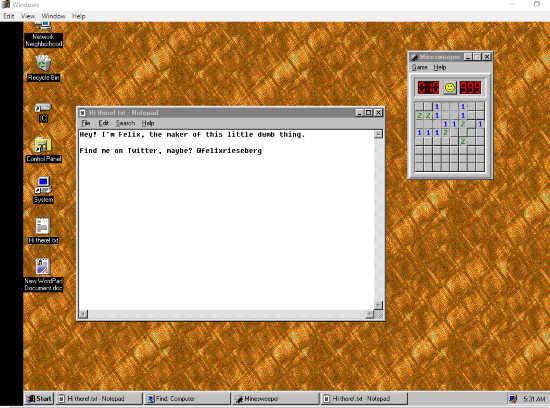 The very first thing you might wanna do is adjust pointer speed because it would be too slow and you won’t be able to use mouse properly. For that, you can open Control Panel, and then Mouse option. 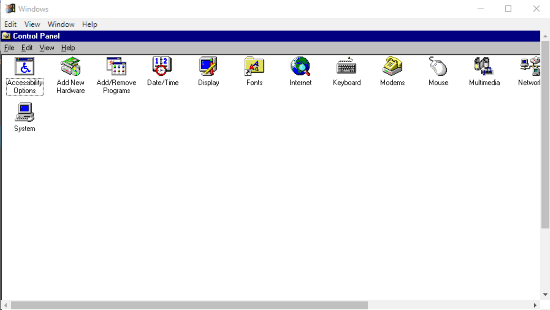 Play with available options and be a part of experiencing Windows 95 OS. When you’re done, you can close the window. The next you open Windows 95 again, it will open from the last item that was opened before closing.

We’ve also covered a tutorial to make Windows 10 look and feel like Windows 7.

If you ever wanted to get Windows 95 experience or just want to check the look and feel of Windows 95 operating system on your own, then you are gonna like this app. Many users would be thankful to the developer. Nice work, indeed. You can try it.