So, if you are confused between two fonts and can’t decide which one to use, then you can compare the two using this service. You can easily check how letters of the alphabet are formed in each font and how they are different from each other. This will help you in deciding which font you want to go with.

As you can see in the above screenshot the two fonts are compared by overlapping them over each other. This clearly shows you the difference between the two fonts and how letters are written in each of the two fonts.

At the bottom of this overlap comparison box you will see two options as shown in the screenshot below. 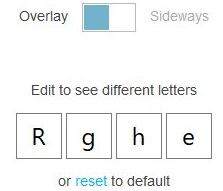 Above this option you will see a slider button with overlay written on the left side and sideways written on the right side. This is for comparing two fonts either by overlapping or for side by side comparison. Just click on the view you like, if you click overlay the font will be shown overlapped like in the first screenshot and if you click sideways then the comparison will be shown side by side as in the screenshot given below.

You can also check out FontViewOk, a free font comparison software which will let you preview text with all the installed fonts together.

I found this web service very unique and useful. I would definitely recommend it if you are unable to decide which font to use out of two for your work.

Check Tiff out from here.