Peal Sounds is a free iPhone app to send hilarious pre-recorded sounds via Facebook Messenger. Sending GIFS and images might make your messaging cool, but sending funny sounds can make your messages more interesting. This app offers tons of top and new soundboards with hilarious sounds, which you can send to your friends via Facebook messenger. It lets you explore and discover various sounds from different movies, music, and TV shows uploaded by other Peal users.

That means you can also upload your own sounds by going to www.peal.io and submitting them. If you are looking for any particular kind of sounds then it also has an option to search sounds that match your need. Make your conversation much interesting by finding a hilarious sound and send it with just a tap. If you want to express yourself to your friends without using the usual text and GIFs, then my friend this app is definitely for you.

The below snapshot shows the app interface with pre-recorded sounds. 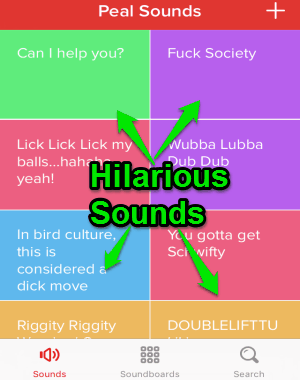 Note: The app doesn’t support direct upload of your sounds, which means you have to go to www.peal.io in order to create soundboards and upload sounds.

How to Discover and Send Hilarious Sounds via Facebook Messenger:

You can get this app from the homepage of the app or from the App store.

How to discover sounds:

As soon as you open the app, you will be able to see different sounds on the “Sounds” tab. You can filter those sounds with either “Top” or “New”. The following screenshot shows the “Sounds” tab. 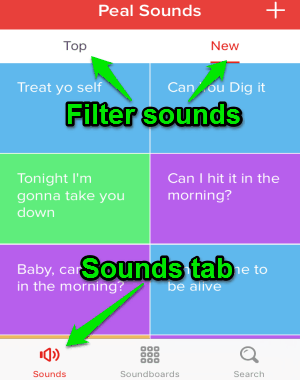 How to explore soundboards: 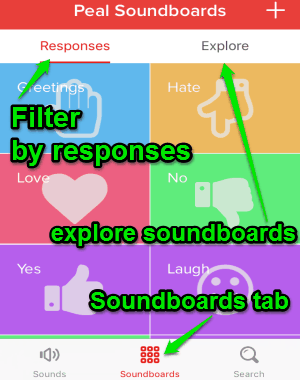 How to search sounds:

Tap the “Search” tab adjacent to soundboards in order to find sounds of your choice. Simply type any name for the sound and it will provide some suggestions available in the app’s database.

How to send funny sounds:

After finding your favorite sound, simply tap it and a pop-up button will appear with the option to send sound via Facebook Messenger. You can click the “+” icon at the to submit the request for a sound that is not available in the app’s database.

Peal Sound for Messenger is quite an interesting and fun app for iPhone to send hilarious sound via Facebook Messenger. You can explore popular and new soundboards which include various sounds from movies, music, and TV shows. Personally, I like this app as all I have to do is choose a sound and send it with just a tap. Give it a try.