Photo Sphere Camera is  a free iPhone app to capture 360° images and publish them to Google Maps. The app is developed by Google, Inc. and it is its official product to capture 360° images and then publish them to Google Maps.  All the 360° images clicked by using this app are exactly similar to the ones which you might have seen on Google Maps Street View. It means that now with the help of this app, you can put any location on Google Maps for others to view it. You can capture all aspects of any place, including up, down, left, side, and all angles to create perfect 360° image.

The app also comes with Geotagging feature for tagging the location of 360° photo captured by you. You can also choose to share 360° photos via Facebook, Twitter, mail, and Google+.

Note: Each of clicked images is verified by Google before they get published to Google Maps and appear there.

How To Capture 360° Images and Publish to Google Maps:

First of all, you need to download and install Photo Sphere Camera app from iTunes App Store. When you launch it, you will see the home screen of the app with the two sample photos sphere. You can tap on these sample spheres to get an idea about how 360° images looks. The app displays the 360° image in an enlarged view and you can swipe on it any direction to explore the image from any angle of your choice. You can also pinch and zoom to do zoom-in and out of the image. 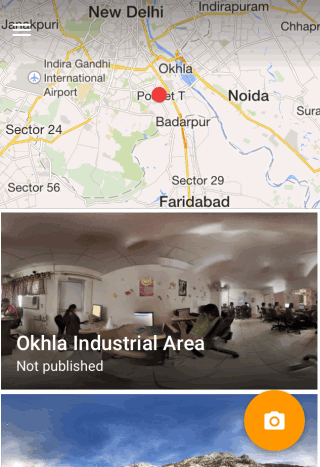 You can see that there is an Orange colored camera icon at bottom right corner. Tap on this icon to capture your own 360° image of any place of your choice. As a result of the tap, you will see a rectangular box with a circle inside it, along with an Orange colored dot. You have to point your iPhone’s camera on the dot. Just when you point the camera on dot, the app will click photo automatically. After clicking, you will again see the same dot and you have to point the camera on it again. This way, you have to keep continue the procedure until you have clicked the complete 360° image. The Orange colored dot also becomes Red if you are not pointing the camera correctly on dot. 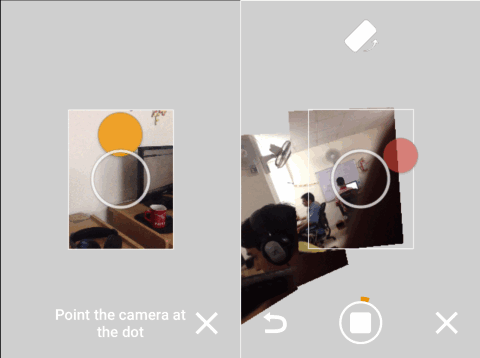 You can check the progress of your 360° image using the circular icon at bottom which gets filled with Orange color as you go on to click images. If you think that there is any shot which has not been clicked properly, then tap on icon at bottom right to Undo it. This way, click the complete 360° image using the app and tap on tick mark option to proceed to stitching part.

In this part, you don’t have to do anything as the app stitches all images automatically. Once the stitching gets completed, you are ready to view 360° image clicked by yourself. The image is still unpublished and if you want to publish to Google Maps, then you have to tap on it. Do remember, the image gets published on Google Maps only if it gets verified by Google. 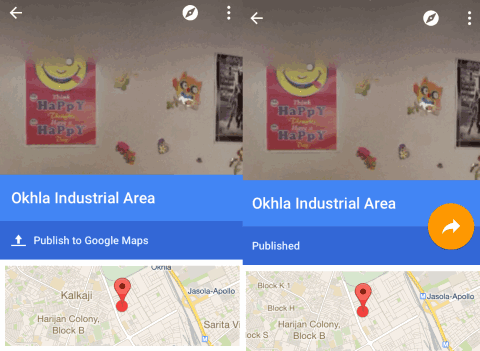 The app also lets you adjust a few settings for the image to be clicked. You can access Settings by tapping on three bar icon at top left. Some of the settings are: Resolution (Low/Med/High), Geotagging, Save to Album, etc.. 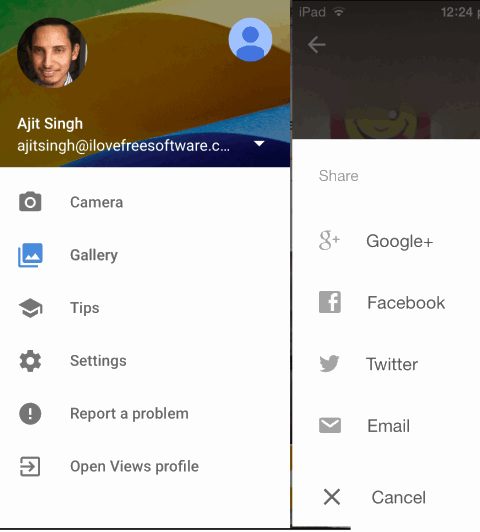 You may also like: 5 Panorama Apps for iPhone To Make And See Panorama Photos.

Photo Sphere Camera is a really awesome iPhone app to capture 360° images and publish to Google Maps. I really loved using the app as it makes capturing, publishing, and sharing 360° images very easy stuff. All the 360° images clicked via this app are really awesome. This app is definitely a must try app for all.