This article lists 5 free bubble shooter games for Facebook which aim to give you some target practicing. Bubble shooter games are very popular as they are easy to play and can be enjoyed by any age group. All the games have pretty good animation and background music. All the games have the same game play to shoot same colored balls at the bubbles given on top of the screen. When you shoot a ball at same colored bubbles on top of the screen, the bubbles disappear. The bubbles should at least form a group of three or more bubbles for them to disappear. There are special boosters to help you earn more points in the game.

More or less all the games follow the same criteria, apart from a few things that might be new or additional. Let’s look at these bubble shooter games for Facebook below. 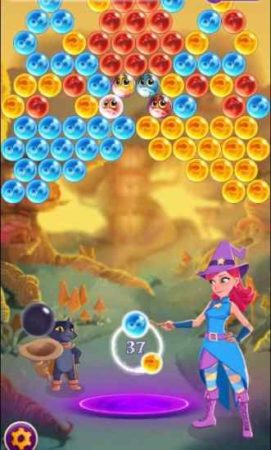 Bubble Witch 3 Saga is a free bubble shooter game for Facebook. This is a pretty fun game with lovely graphics and background music. The game play screen can be seen in the screenshot above. In this game the witch is looking for her friend Wilbur who was kidnapped. To find him you have to go from level to level, successfully completing your objective. Make groups of same colored bubbles to make them disappear from the board.

You will get 5 lives when you start the game. You lose one life if you are not able to complete the level in the given number of balls. The number of balls available to you at the beginning of a level is shown at the bottom where you have balls to shoot from. Two balls are displayed at a time, which can be shot at the bubbles above. You can switch between the two and use the one which you want. You also get power ups after a few levels to help you out. Bubble Witch 3 saga is the third game in this game series. The first two versions of the game are also quite exciting and can be tried out as well. 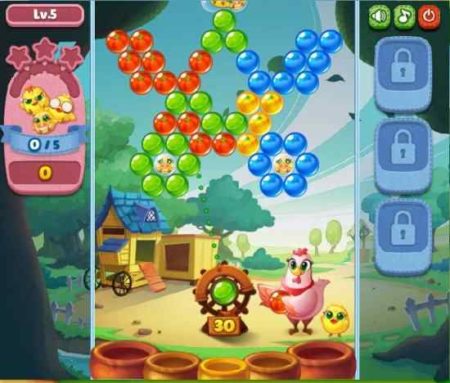 Bubble CoCo is a free bubble shooter game for Facebook where you are shooting to rescue little chicks who are stuck between farm vegetables. The game play screen can be seen in the screenshot above. In this game also you have to shoot same colored balls to make a group of 3 or more balls. The group of bubbles will then be eliminated and the vegetables that fall down in the containers below will fetch you points. The mother chicken has to shoot the balls up to free her small baby chicks which are stuck between the vegetables.

When the level objective is met you can continue on to the next level. If you do not meet the objective in the given number of balls then you have to retake the level. The number of balls you get to complete your objective is given at the bottom of the ball circle. You can also switch between the two balls which are shown on your screen. You will also get boosters to help you out in later levels.

Inside Out Thought Bubbles 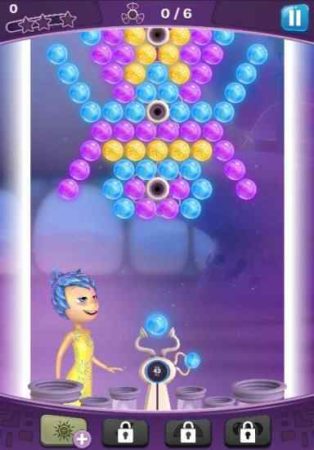 Inside Out Thought Bubbles is a free bubble shooter game for Facebook developed by Disney. In this game also you have the same aim to shoot all the bubbles down using the balls given at the bottom of the screen. The balls falling down will be collected in containers given at the bottom and will fetch you points. The animation of this game are super cute and they have to be as it is a game by Disney, so we do have high expectations from games by them. Start with level one and make your way through. If you are not able to complete a level in given number of balls then you lose a life. The number of balls available in each level are displayed in the cannon which provides you balls.

Two balls at a time will be displayed and you can switch the color of the ball with the other one displayed. After a few levels you get power ups and boosters to help you out. Like you can bounce the balls of the wall to reach your destination. You have a rainbow ball which will wipe out all the balls around it. Keep playing the game and you will keep on getting such bonuses. 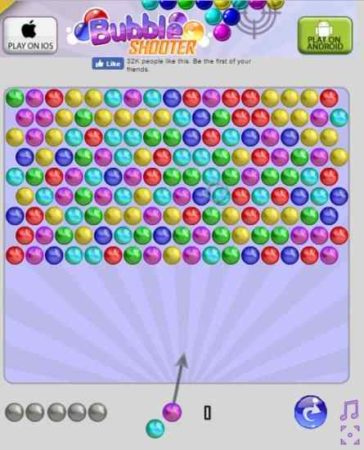 Bubble Shooter is a simple bubble shooter game for Facebook. This particular game does not have great graphics or background sound. It has a plain and simple interface, which can be seen in the screenshot above. You just have to aim the balls from the bottom to match the balls given on top of the screen. Match 3 or more same colored balls to eliminate them from the screen. If the balls reach the bottom of the game window then it is game over for you.

In this game also two balls the current one and the one which will be up next are displayed on your screen. You can easily switch between the two. This game is more difficult than it looks. Primarily because the lines of balls also keep moving downwards. If you are not able to clear them in time, then it will be game over for you.

Bubbles IQ is a bubble shooter game for Facebook. With the name like Bubble IQ you would think it has something to do with question and answers. But there is nothing like that. It is a regular bubble shooter game. The interface of the game can be seen in the screenshot above. You have to shoot balls from the bottom and match the ones that are given on top of the game screen. When 3 or more balls of the same kind are matched then they are eliminated from the screen.

There are a limited number of balls available for you to complete the level. If you utilize less balls to complete the level, then the remaining balls are added to your score as points. There are also 5 power boosters given to you at the bottom of the screen which you can use when the need be. The description of each booster can be seen by hovering your mouse over it. You can view leaderboard for rankings in the game.

These are the 5 free Bubble Shooter games for Facebook which let you have some target practice and improve your aiming. The games which I liked the most are Bubble Witch 3 Saga and Inside Out Thought Bubbles, just because of the beautiful graphics and awesome background sound. Apart from that both these games also had very creative power boosters. Bubble Witch 3 Saga is the third game in the bubble witch series, so you can try out the first two as well which are equally entertaining. So try these games out and see which ones you like.