Qmmp is a free open source audio player which is available on multiple platforms. It is an audio player written in C++ which uses the Qt library. The most recognizable feature of this audio player is its interface that has been styled to look like Winamp and XMMS. This is the default interface of the application and it can be changed in the settings. So, don’t worry if you hate the stock Winamp look. For those who like Winamp, Qmmp supports Winamp 2.x skins.

Qmmp has a nicely stacked deck of controls. There are three parts of them, namely: the equalizer, the playlist, and the playback deck. The playback deck shows a nice small visualization of the music played on Qmmp.

Qmmp also has tons of features. It can read a wide array of formats. Some of them are: Native FLAC, Ogg FLAC, Musepack, Wavepack, WMA, Monkey’s Audio, MIDI, PCM WAVE, etc. Qmmp also offers some DSP filters that change the way you listen to a song. For example, LADSPA allows Qmmp to handle numerous audio filters. BS2B is a filter that helps to reduce the superstereo effect and increase the comfort of headphone listening.

There are tons of free audio players on the web that you can go with. But is Qmmp special? Let’s find out!

How to Use Qmmp 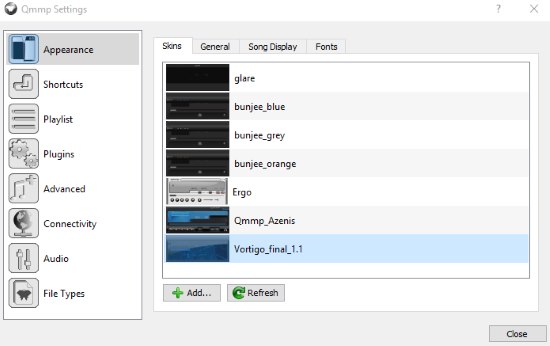 I am an avid audiophile but for me the player’s looks are also important (makes me feel good when I hit the play button). The stock skin of Qmmp is quite plain. So I opened the settings (top-left dropdown menu) and switched to ‘Vortigo’, a blue tinged attractive skin. Now we are ready to play some music!

On the bottommost deck, you can compile a playlist by adding files one by one or adding a whole directory. The playlist can be saved as an m3u, m3u8 or xspf file. After loading the audio files, hit the play button on the playback deck.  Additionally, to bring the element of randomness, the playlist can be set to shuffle from the deck. Now, hit play and enjoy the music! 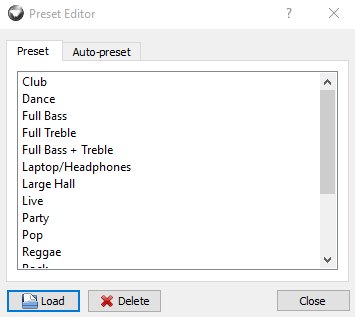 The equalizer includes a number of selectable presets that boost specific frequencies to make a song sound better (according to your taste). But if you’re planning to use Qmmp all day, make sure you turn on BS2B in the PlugIns settings. This will keep your ears from tiring (as explained in the introduction).

So why use Qmmp over Winamp? The most obvious answer is that Qmmp is open source. This enables Qmmp to be tweaked smartly. Users can also add custom filters because of LADSPA. The second-most obvious answer is that Qmmp weighs quite less as compared to Winamp. If these two reasons are enough for you to use Qmmp, then go for it! If not then try something else. In my opinion, Qmmp deserves 4.8 stars.