Here is the free multiplayer Android racing game with real-time video chat. It is fun to play this space combat game. To play the game, you need to download an Android app named Hyperspeed. Then, after following a few steps, you can proceed to play the game. The game lets you choose the game faces where you can wear faces such as Blue Steel, Catstronaut, Cosmic Outlaw, and Ultraviolet Shades. Then, you can select the game planet to play with your friends or opponent. The game has great visuals while playing the car racing game in the outer space.

It feels so wonderful playing this game. The game lets you select the country and state to find people of your own area. Once the person is found, you can start playing the game. After that, you will see your opponents face along with yours on your mobile screen. While playing the racing game, you can chat with the person whom you’re playing with. Besides that, the game ranks you on the leaderboard. Also, you can play Zombie run games on Android.

The very first thing you need to do is to install called Hyperspeed. This is an Android app which you can easily find on the Google Play store.

Thereafter, you need to enter a few details such as your date of birth, gender, and the place where you live. You can enter your country and state in order to find people in your location. Then, you can create a username which appears on screen while playing the game. After that, the app prompts for access to the camera and mic so that you can listen to the people while playing this social game.

Now, you’re all set to play. But before landing down on outer space, you need to select your avatar. The app has four game faces; Blue Steel, Catstronaut, Cosmic Outlaw, and Ultraviolet Shades. Once you choose your game face, you can set that face to your game profile picture or you can go back to take a new picture.

The game lets you select the planet. Once the planet is selected, you can find the person who is around you playing the game. And then once the player is found, the game gets started. 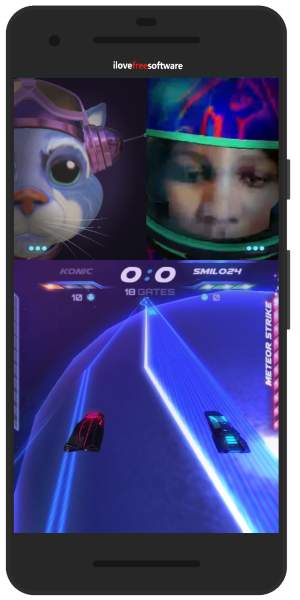 On your phone screen, there is you on the left and the right side is your opponent whom you’re playing with. You can start your game and simultaneously have a friendly conversation.

Hyperspeed is a wonderful mobile racing game with video chat built-in feature. You can select your avatar and then play space combat game. The app has great visuals. Also, you can have a friendly conversation in a video chat with your opponent while playing game.