Just-Install is a free bulk application installer that can silently install around 120 popular software to your PC. It is a command line software that will automatically install and download the programs to your PC. You just need to specify names of programs that you want to install, and it will automatically download and install them on your PC, without requiring any input from your end.

If you are a system administrator, and frequently need to install programs on multiple PCs, then this bulk silent application installer can be very useful. The best part of this program is that you can choose the programs that you want to install, and also the sequence in which you want them to be installed.

To download this software, you have to run the following command at the command prompt (CMD) with administrative privilege (must).

The above command will install “just-install” on your PC.

Once you have installed this software, you need to update it with the latest list of available software. For that, just type the following command:

For installing single program at a time, you have to write this simple code at the command prompt with administrative privilege.

It basically downloads the 7zip from internet and starts installing silently without any additional message box.

For installing multiple software from one single command, you can write the following example command to download and install 3 software simultaneously.

The above command will start downloading the above 3 software one by one and start installing silently on your PC. 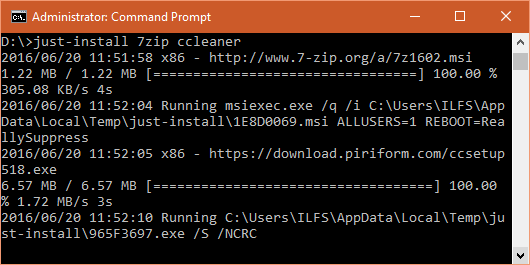 You can also write the simple batch script to run the above code in another way. Just write this simple command in BAT file and call it from administrative command prompt.

The code of this BAT file should look like this.

In another example, you can write the below example code in BAT file. 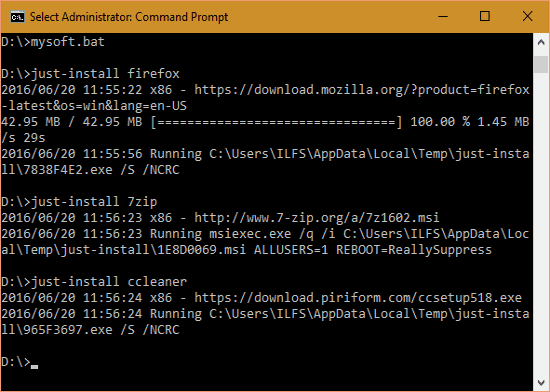 You can take help about this command line program by typing the following code at command prompt. 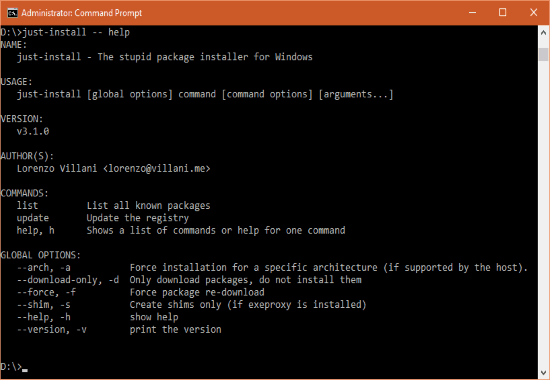 This program is useful for users; specially system administrators who needs to install same program again and again on different PCs.

This simple command line software lets you install around 120 applications silently and in bulk to your PC. There are no dialog boxes that will appear when installing the available programs through it. You can silently install various available software in bulk using this command line program called “just-install“.