Cloud9 IDE is a free online Integrated Devlopment Environment for web development. Apart from being used as an IDE, Cloud9 can also be used as a project management tool.

Essentially Cloud9 IDE runs on the web browser and is present in the cloud. This makes it possible for the user to create, view and edit the project from anywhere, anytime. This free online JavaScript IDE also allows the user to debug the web application to remove the errors and even deploy the application from any system. Further Cloud9 IDE in itself is an opensource project, which is open to review and modifications. The code for this software is available for free. 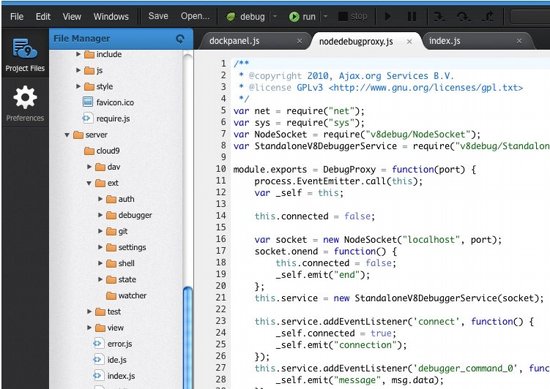 Cloud9 IDE is available as a paid version for the commercial projects. However the Cloud9 IDE is also available as a free version for the Open source projects.  The interesting fact is that, whatever be the project, the features available on free and paid versions are the same. When you choose to setup a project as Open Source, it can be viewed by anyone, even while you are working on it, and Google Bots can crawl it. So, if your project is not truly Open Source, then do not set it as such on Cloud9 IDE, just to save money.

Some other IDE that you can also try are Aptana Studio, and free ASP.Net IDE.

Let’s Take a Look at the Remarkable Features of Cloud9 IDE:

With all these street smart features, Cloud9 IDE is one of a kind software that assists in Web development projects.