Here is a list of 4 free iPhone apps to get live Wimbledon 2014 updates about almost everything related to Wimbledon. These apps provide real time updated news about the third Grand slam of the year which is held every year at London.

This is the time of the year when all the Tennis fans, experts, players, are thinking and talking about only one single thing: Wimbledon 2014. To make sure that you don’t miss out on the fever and any news, I have compiled this list of 4 free iPhone apps to get live Wimbledon 2014 updates. These apps offers you various information about Wimbledon 2014 like live score updates, draws, order of play, live news, videos, highlights, images, etc.. Some of these apps even let you mark your favorite players, events, etc. so that you never miss even a single news related to them. These apps provides various inside information as well which you might not notice while watching the game.

Lets check them out one by one.

1. The Championships, Wimbledon 2014 for iPhone: 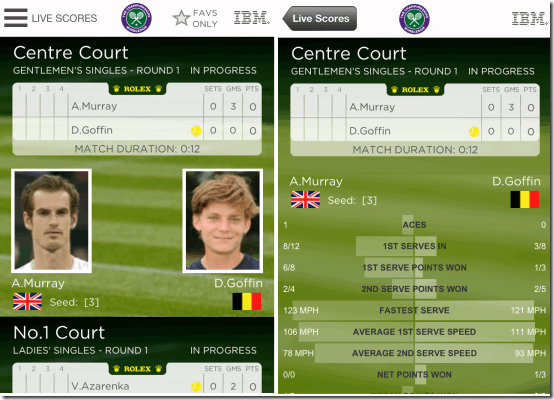 I am going to start my list with the official iPhone app for Wimbledon 2014. The Championships, Wimbledon 2014 for iPhone is the official app developed by prestige The All England Lawn Tennis Club. This app provides the latest and updated news about Wimbledon 2014. This app has specific section called My Wimbledon.  Here, you can configure the app according to your personal preference like selecting Favorite Player, Favorite Countries, and Favorite Events. Apart from this, you can check Live Scores, Results, Draws, Order of Play, News, Live Blog, Live @ Wimbledon, Videos & Audio, and Photos. You can also check the stats of any player playing in Wimbledon 2014.

The app even displays temperature at London and weather conditions.  The Live @ Wimbledon section offers Live Video, Live Radio, Center Court Radio, and No.1 Court Radio. The app also has Shop feature for purchasing official Wimbledon merchandises. The only thing that I think that can be improved in the app is that it doesn’t have any option to change the timezone of schedule for viewing schedule. This app displays schedule only according to British Standard Time.

Get The Championships, Wimbledon 2014 for iPhone here. 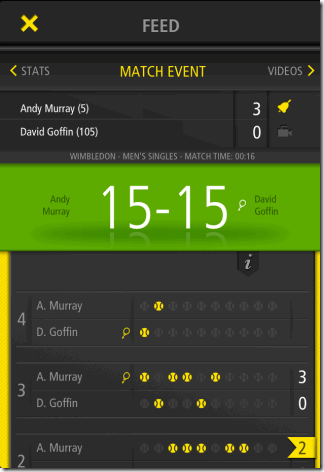 Live Score – Wimbledon 2014 is the second iPhone app in the list. You are required to personalize the app according to your preferences before you can start using the app. You can choose your favorite tournaments and players for getting information related to them only. The app displays matches for Yesterday, Today, and Tomorrow depending upon your set preferences. Tap on any match to view detailed info about match, including stats and option for voting about the winner of the match. 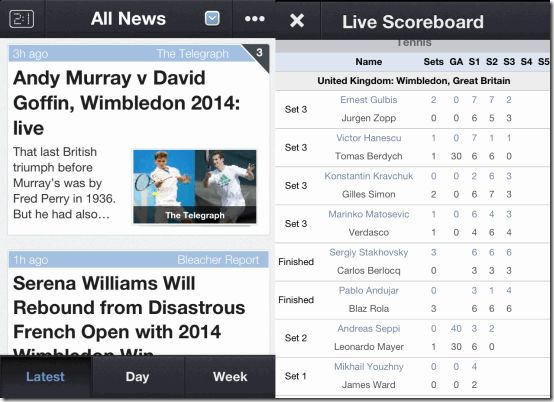 The third app in the list is Tennis News & Live Scores. The main purpose of this app to offer you all the latest news related to tennis. Since its Wimbledon, hence its obvious they are also providing latest news from Wimbledon. You can choose from multiple topics to get the news like any specific player, tournament, country etc..The app displays all the latest news on home screen of the app. You can find the topics either from their pre-defined list or by manually entering the name. All the news can be sorted on the basis of Latest, Day, and Week basis.

If you are interested in live streaming of the  matches, then you can also view them easily from the app in case there is some live match going on. 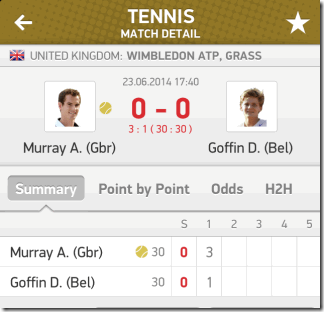 FlashScore Livescore is a multi-sport app which lets you follow 26 different sports. If you are looking for Wimbledon 2014 updates then launch the app and head over to tennis section. Here, you can get live updates about different tennis competitions, including Wimbledon. The app has different section for following Wimbledon, one for Gentlemen’s game and other for Women’s game. Tap on the one which you want to follow. On tapping, you will see the list of all the matches on next screen. The app also has a calendar section for selecting any particular date to view matches on that date.

The app also lets you bookmark specific matches you want to follow. On bookmarking the matches, you can track these matches from My Matches section instead of going through all the matches. You can also check the rankings of player for different tournaments. Apart from this, the app also displays live odds for all the matches via Bet365, Bet-at-home, Sportingbet, Unibet, and WilliamHill.

These were the 4 free iPhone apps to get live Wimbledon 2014 updates from anywhere at anytime. Just install these apps and never miss any action from Wimbledon and remain ahead of your friends. These apps will make sure that you know each and every detail and aspect of Wimbledon 2014.