This article lists 5 free football games for Facebook. Most of these football games are about managing a football team where you have to sign up players and create a team and then play matches against other teams. The graphics and background sound in all the games is pretty awesome. In most of the games you will be managing a football team by signing up players, playing matches, training your team, signing up sponsors for your team, etc. Most of the games also provide a detailed tutorial on how the game works before you start playing on your own.

You will be guided through the tutorial and after that you can play the game on your own. So let’s look at these free football games for Facebook below and manage our own football teams. 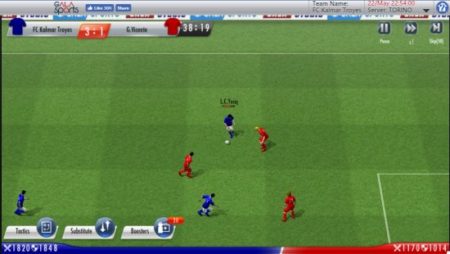 Football Master is a football game for Facebook. To begin with this game you are required to choose players and create a team for yourself. For this you are also guided by a coach. Once you have selected a team you need to pick out a name for your team and choose a dress for your team as well. Once you are done with that you are ready to play a match against another team. You can decide tactics that your team will follow. You will also be rewarded for a good team formation by coins and gems.

Use these coins and gems to upgrade your teams skills, and by hiring more players. When you are ready click the play match button and you will be brought to a screen like the one shown in the screenshot above. The match will start and you will feel like you are watching a real football game. You can change tactics in the middle of the game, and can even substitute players. The game can be paused and seen in slow motion if you like.

The graphics with out saying are awesome and the background sound compliments the graphics. The sound of people chanting while the game is going on will feel real. You can also use boosters during the game for your players. 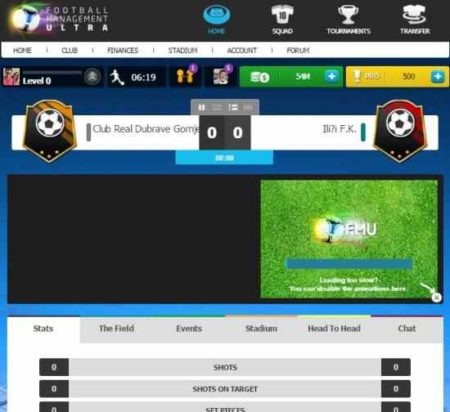 Football Management Ultra is a free football game for Facebook. In this game also the game starts with you signing up to manage a football team. You will have a support staff to help you out. Now you have to sign up players for your team. Once you are done with that, you can go ahead and decide tactics for your team. Then you can jump into playing a match with another team. The game doesn’t have animated graphics like in the previous game. But you can see play by play of the game on the game page which is shown in the screenshot above. The score is displayed on top of the page and live match detailed will be displayed on the page as well.

After the game is over you are shown a detailed description of the match with game breakdown, player breakdown, etc. You can also play other matches if you like which can be friendly matches or competitive ones. Just make sure your team is good enough to participate in a tournament. You can even sign contracts for the team with sponsors. You earn experience points for every match you play and after a number of experience points you level up to the next one.

Top Eleven be a Football Manager 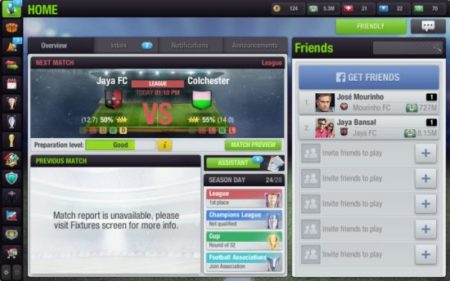 Top Eleven be a Football Manager is a free football game for Facebook where you have to manage your own football team. Here also you start with a tutorial to guide you through how the game works. You start with naming your team and playing a friendly match. You can change tactics during game play and can even substitute players. Sign up sponsors for your team and can even bid for signing up new players for your team.

Check up your squad line up and make any changes you would like. Provide appropriate training to your team, so they are ready and fit for any match coming your way. You can also view reports on how the team is doing fitness wise. View a schedule of games your team is supposed to play during the week in the tournament. Check out your finances, associations, and visit the club shop to buy stuff.

The game is not very graphics based but the interface is pretty easy to follow and the background sound is pretty awesome. The games being played between teams would only show dotted numbers on the field instead of players. But you can easily make out what is happening on the field and who is winning. You can change your tactics during the game and can even make substitutions in middle of the game. 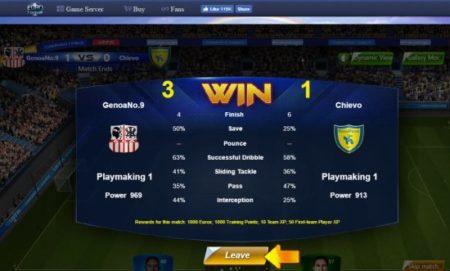 Euro Football is a free football game for Facebook. In this game also you will be managing a football team. You start with signing up for players for your team. Then you go ahead and play a match with another team. The match will start and you can see the match if you like. But if you do not want to see the match then you can skip the match and reach the conclusion of the match. The match result will be displayed to you as shown in the screenshot above.

Now you can go ahead and sign up more new players for your team. You will level up with each game that you play and win. Your teams ranking will also improve as you win matches. You will receive rewards after each match and each training session. You can challenge other teams once you have reached a certain level. 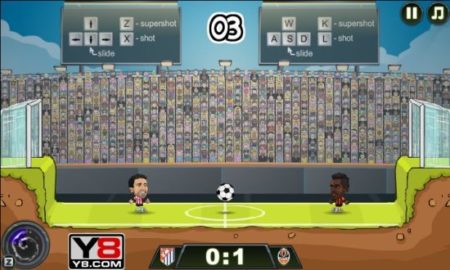 Football Legends is a the cutest game in the list of football games for Facebook. The game is animated and it does let you play and kick the football around instead of just managing a football team. That is why I included this game. To begin with you can choose whether you want to save your progress online or locally on your computer. If you want to save your progress online then you have to sign in and create an account online. Then you need to select the type of game you want to play like one player, two player or quick match.

Select any and the game would begin with 2 players on the field. One is your player and one is a random opponent. Now you have to kick the ball in the goal post. So you have to be quick to kick the ball. The controls to move forward, jump and kick are shown at the top of the screen, as can be seen in the screenshot above. Whoever has more points at the end of the time, will win the game. The game is quiet fun to play and competitive as well.

These are the 5 free football games for Facebook, which let you manage your own football team and play this exciting game. The graphics of all these games are pretty awesome and make you feel like you are in middle of an actual game. The games I liked the most are Top Eleven and Football Legends. Go ahead and give these games a try and see which ones you like.