WPFSniffer is a free and simple Windows packet sniffer that can sniff packets for the localhost or an adapter. You can choose the adapter your want this tool to listen at and it will sniff all the packets being transferred from your computer and display the information on the screen. You can view the Source and Destination information, length of the packet (size), raw bytes etc., in the packet. It breaks down the information and formats in form of ‘click and expand’ style.

When we talk about a packet sniffer, we often get a software with an over-crowed interface with lots of options, buttons and menus. Most of us would not even use all of it (maybe some will use all the features). WPFSniffer is a simple Windows Packet Sniffer that makes sure that it does not miss out on important information that you might expect from a packet sniffer and does not clutter the screen with useless information. 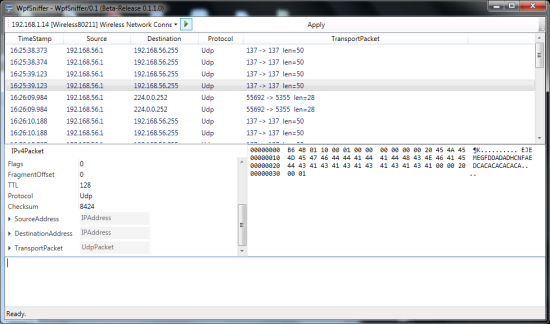 The interface is pretty simple and makes it easy for a person like me, who knows less about computers, to deal with the packet information. For those who just forgot what packets were, packets are chunks of information that is formatted in a specific manner (protocol) and encapsulated (packed) before the information is transferred over to another computer. At the receiver’s end, the packet is opened just like we would open a Christmas present. This Windows packet sniffer sniffs and captures the information and breaks it down, formats the information exactly the way the Operating System would interpret it.

You know that computers on a network talk to the router and even processes talk to each other via various ports. You may not be interested in all those packet being captured by this Windows packet sniffer. You can set filters for WPFSniffer to sniff only certain ports and packets captured on those ports will be displayed. For example, here I am setting a filter to port 21 (port used for FTP). FTP (File Transfer Protocol) is a method used to transfer files between computers. I am using the Command Prompt to see if I can capture something on this Windows Packet Sniffer. See the result for yourself. 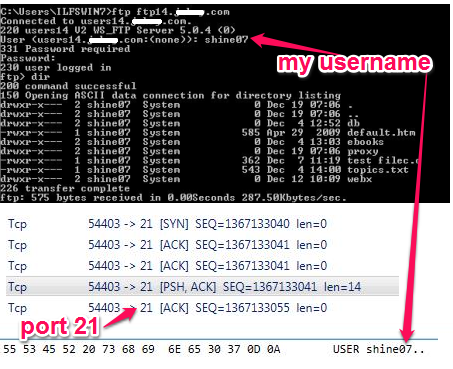 As you can see that this Windows packet sniffer was able to capture the FTP packets and was also able to show you some interesting information about my FTP account. I would have scrolled down further and as you might have guessed, it had my password in the packet. Many other methods of communication over the network or on the internet are still vulnerable and a network sniffer like this, can bring you the information in its most weakest form.

Interested in knowing more about other Windows Packet Sniffers? Click here to check out this review about 5 free packet sniffers.