Scholarref is a group of shell tools and one of those tools is a command line BibTeX citation generator to generate BibTeX for any DOI. Here this is an extremely simple shell script which takes DOI of a publication as an input to generate the corresponding BibTeX right on the command line. With this, you won’t have to go to the websites and manually search a publication and get the DOI. Here it uses a simple API under the hood to get you the citations that you can copy-paste and use in your research paper.

During writing a research paper or journal, you have to cite some other external publications and you generally have to follow the manual approach of writing that yourself. But the tool here will save you a lot of time by generating that automatically for you. However, it just one tool included in scholarref, in other posts of mine, I will talk about others as well as they are also very nice for people who often create research papers or journals. The best part about these tools is that they are shell scripts and do not really require external dependencies to run.

Here getting started with this tool is very simple. Here you only have to clone it and then build on on a Linux distro. If you are on Windows 10 then I will suggest you to use it in any Linux subsystem, Ubuntu will work just fine. To clone and build it, you have to run the following commands one after another. After running these commands, the “getref” command will be accessible from the terminal. 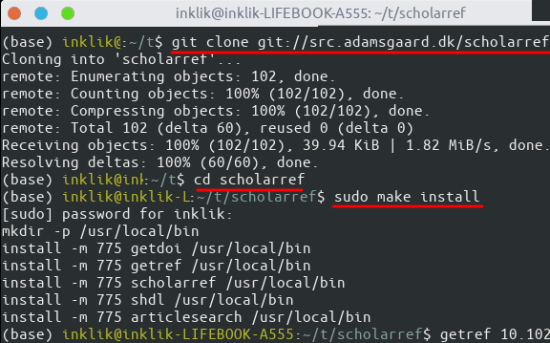 To get the BibTeX citation for any DOI, you just run the command in the following syntax. Next, you just hit enter and it will automatically generate the citation or you. It is simple as that. Also, getting DOI for any publication is very simple using one of the tools included in this scholarref tool-chain and it is called “getdoi”. 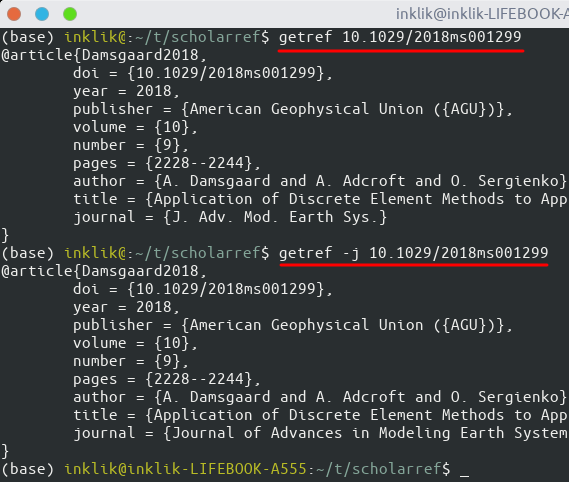 In my terminal’s screenshot above, you can see the generated BibTeX citation. I just gave it a DOI and it generated the corresponding citation. Now, you can use it in this way and generate BibTeX citation for any DOI that you have. All you have to do is just run a simple command and then you are simply done.

If you are looking for a simple way to get BibTeX citation for any of your publication then you can use the tool mentioned here. It is very simple and generates the citation in a few seconds. With this, you will not have to waste hours to find the DOI and then get the citation text that you can use. You can explore other tools included in scholarref as well and I will also try to cover them in later posts.