Batchrun is a free batch files launcher that enables the user to create Windows batch files with ease. Windows batch files are those that contain a series of commands that are executed by a specific interpreter. In short they are used for automating many frequently executed commands. This process of creating batch scripts is a tedious process and it requires the user to have a fair bit of knowledge about scripting languages and working  in the DOS prompt. This could become quite difficult for new users and this is where this free batch files launching app comes to the rescue.

Batchrun creates files with a .brs extension, unlike the usual batchfile extension, .bat. This alternative can be used to run any number of windows programs and batch scripts just with a mouse click. Further, Batchrun allows the user to control the startup and execution behavior of the batch files that are created. 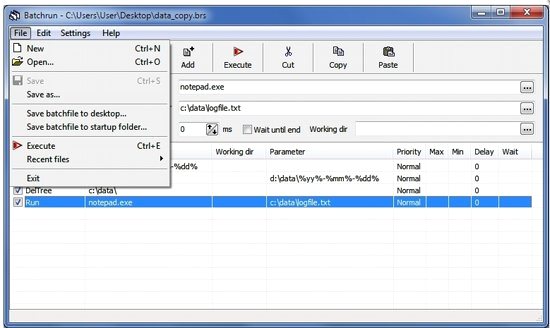 Batchrun’s file management functions allow the user to control the execution, apart from starting them. The user can control the behavior of the batch files in execution and set them to priority or run modes at any point of time. For example the user can start an application and make it run with a higher priority. Also the processes can be made to run in the background.

The batch files that are created can be run in 2 ways:

Here are some of the features of BatchRun:

All these make Batchrun, an interesting software to create and run batch files effortlessly.

Batchrun is available for download on Batchrun’s official website. The size of the installer file is about 1MB, which can be easily downloaded and installed. This free batch file launcher is capable of being run on Windows XP,Vista and 7, both 32 and 64 bit systems.