MiltiReplace is a free search and replace multiple words tool, which finds the matching words in a text and then replaces them together with new defined words. This freeware lets you search multiple different words and replace them with their corresponding replacement, in one go. So, you do not have to manually replace each word separately.

This is a decent enough freeware to do the task, in an easy and a very quick manner. Simply enter the desired words to be replaced and their corresponding new words, and then click on one single button. The freeware does the processing automatically and you’ll get the words replaced, within seconds. 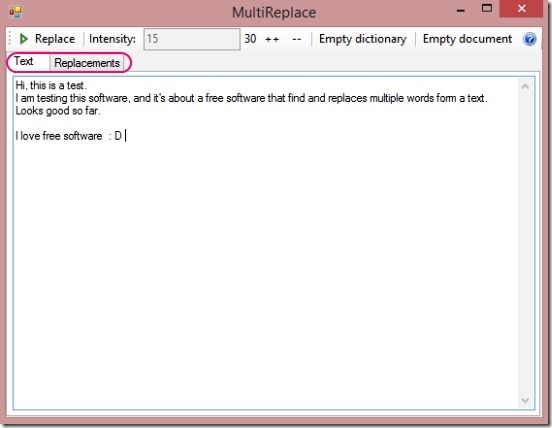 Good thing is the freeware is lightweight and portable and doesn’t requires too many system resources to run. The interface of the freeware is pretty easy to understand and use.

MultiReplace is divides into two basic tabs: Text and Replacements. The Text is the tab where you’ll enter the text in which you need to replace words. You can enter the text either by simply typing, or just paste the text. The freeware lets you enter as long text as you want. 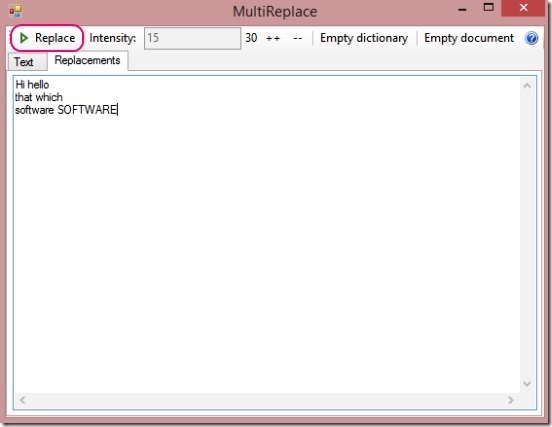 The Replacement tab is where you’ll enter the desired original words and their respective replacements. The format is pretty simple. The format for replacement is “original word replacement word” (a space between both). Simply type each new word in new line in the same format and then, click on Replace button. That’s pretty it. However, the freeware can replace one original word with only one replacing word.

Following is a screenshot of replaced text:

There is a section for “Intensity” as well, but it didn’t work in my case.

MultiReplace is fair enough search and replace multiple words tool. Though, if you compare the freeware with other similar freeware like: WordReplacerLZ and Neo Replace, which can search and replace words across multiple files at a time; MultiReplace features are still limited and some features needs to be corrected like: ability to increase font size, and the intensity button. Still, it a good option if you are looking for a fast, simple, and pretty much effective word search and replacement tool.