The Windows 10 physics based game can be downloaded from the Windows 10 store or from the link provided at the end of this article. When you start the app, you will see a screen like the one shown in the screenshot below. 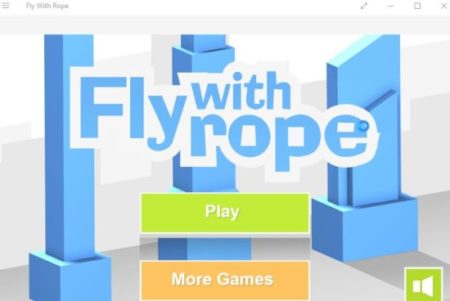 Click on the play button to start the game. Now you will be taken to the level selection screen, where the first level is available to be played, but all others are locked, as you can see in the screenshot below. 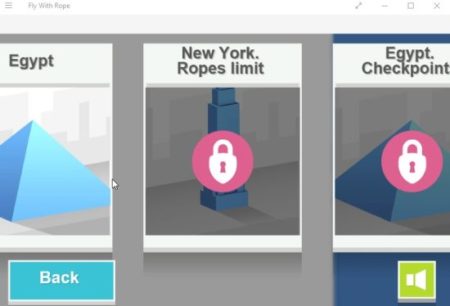 To unlock levels you have to successfully complete the previous one and then you can move on to the next one. The first level is called Egypt, click on the tile to start the game. The game board looks like the screenshot below. 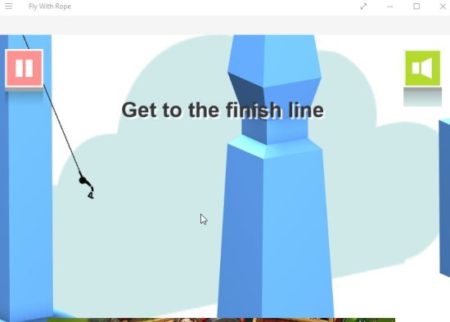 You have to swing the player from building to building and reach the finish line. When you click for the first time, the player will swing from the rope that appears. On second click the player will release the rope and fly through the air. So you have to calculate and estimate how far the player should swing and at what point you let go so the player can fly and cover an appropriate distance to the next building.

The game app supports ads and you will see one at the bottom of the app window. Though the game play sounds easy, its not. It took me a lot and I mean a lot of tries to clear the first level. I kept on hitting the ground, which means game over for you.

When you successfully reach the finish line, you can move on to the next level for more challenges. You can enjoy a total of 15 levels in this game.

Features of this Windows 10 Physics Based game app:

Fly with Rope is a fun and addictive game to play. After many unsuccessful attempts of clearing the first level, I was finally able to make it to the second level. Still trying to make my way out of this level. The game play looks simple, but when you start playing you realize, that its actually not that easy. Swing from building to building, but make sure you don’t crash in the ground, otherwise it will be game over for you.

Check out Fly with Rope for Windows 10 here.