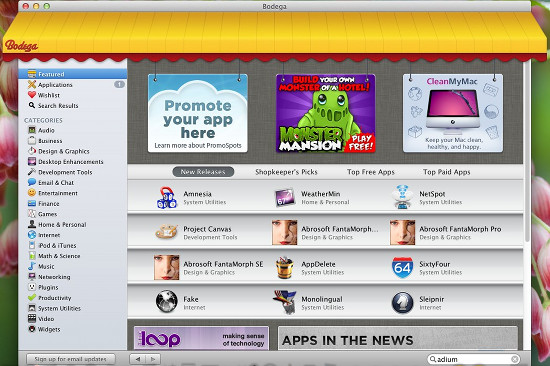 Some of the most common applications like VLC Media player, Dropbox, Adium, VirtualBox, Google Chrome, etc. are not available in the Mac App Store which is seriously disappointing. Applications like the above are the de facto for most of the users across other platforms as well. After I spent a little time Playing with this application, the Mac App Store kind started looking boring.

The application uses the screen real estate in a better way than the Mac App Store and provides a much clear and better looking interface. The way it displays applications and divides them into categories makes it really easy to search, explore, and download any application.

Bodega has divided the applications into 20 categories. When you open up the application you will see the featured selection, which are divided into sections like: New Release, ShopKeeper’s Picks, Top Free, and Top Paid Apps.

Bodega is good for the developers as well as its users, there is no sign up fee for developer unlike Apple which charges $100 per year. When you purchase an application from Bodega, it only takes 7% of the share in contrast to Apple’s 30%. In this manner more of the proceeds go towards the developer. The developer can also offer free trial application here, while The Mac App Store does not have such thing.

How to install Bodega:

To start with the installation of Bodega first click here to download the application. After you have downloaded the file, just unzip it and move Bodega into the application folder. Now you are done with installation and you can enjoy running this free alternative for Mac App Store.

Bodega is a really good alternative for the in-built App Store. It allows you to search and download applications in a simple and straight forward interface. The application’s interface looks amazing and is better compared to the built-in app store in feature as well as interface.