There are some software to keep the PC folders in sync, but doing that for Android is something which is really useful. So let’s see some free Android apps to keep phone folder in sync with SD card.

How to Keep Phone Folder in Sync With SD Card?

SMBSync2 is quite a powerful Android app to keep phone folder in sync with SD card. The app allows you to choose two folders: one from internal memory and another from SD card. It support three types of sync: copy, move, and mirroring. You can set filter to include/exclude some files from syncing. Apart from that, there are some other options as well to configure such as sync sub-folders, sync empty folders, overwrite a file, sync hidden folders, sync hidden files, etc. And once you have specified all the options, the app will auto sync the folders whenever it will detect any changes in one directory. 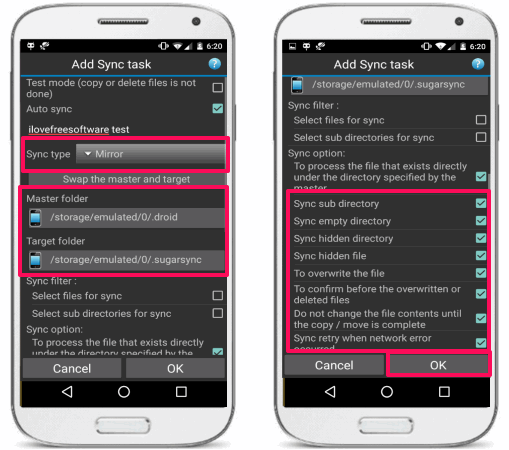 Getting started with SMBSync2 app is very easy. Just get it from the Google Play Store using the above link and then open it up. From the first page of the app, hit the plus icon to add a sync task. After that, another page will open up where you have to specify the syncing options. Specify the name of the task, source folder, destination folder, filters to exclude some file types from syncing, and some other parameters. After you have specified all the parameters hit the OK button to save the current task. The folders that you have specified to sync will remain in sync from now on.

Local Folder Sync is another free Android app to keep phone folder in sync with SD card. The app supports one way, two way, and one way delete (push and delete) like sync methods to sync folders. And you can selectively specify which file types to sync and a time interval to automate the sync operation. You can create multiple profiles in the app to define the syncing task. You can also opt to run sync task manually. 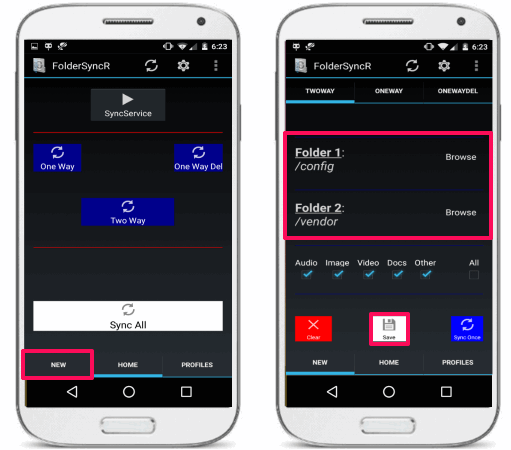 It’s pretty easy to get started with the app to sync folders. Just download and install on your phone and launch it. Next, tap on the New button from the bottom left position and start creating your profiles in it.  There are three sections available in the app to create a sync profile. The sections are TWOWAY, ONEWAY, and ONEWAYDEL respectively. After that, depending on what kind of sync you want, select that section and specify the folders, one from internal memory and one from SD card. Now, specify the type of files that you want to sync and then finally hit the Save button. You can also specify the sync time interval. After all set, hit the save button and from now on the specified folder on phone will remain in sync with folder on SD card.

BFileSync is an Android app that lets you define various tasks to sync two folders. The app is very intuitive and lets you specify two folders: one form internal storage and other from external storage. You can define the sync interval in minutes and also opt for syncing files only when the phone is charging. You can create multiple tasks to sync multiple folders and specify the sync interval of each task separately. There is an option to define some file extensions that you want to include for syncing of files. 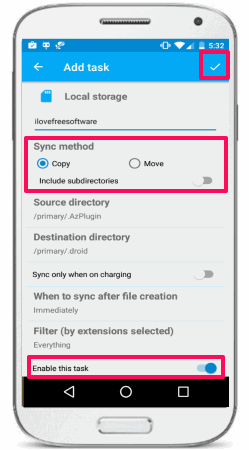 It’s pretty easy to keep two folders in sync using BFileSync app. To use it, first install it on your phone using the above link and then launch it. The main page of the app is empty as there are no tasks available. So, first add a task using the plus icon from the top of its interface. After that, a new page will pop up where you have to configure various parameters such as, sync method, source folder, destination folder, filters, when to sync the files, sync while charging, etc options. You can also define some file extensions as filters to instruct the app to only sync the specified type of files. But, creating the filters in the app is not very straight forward, you’ll have to create them, explicitly, see the complete guide here. After all set, enable the task using the switch given at the bottom of the page and finally tap on the check icon from the top to save the changes. From now on, the folders that you have specified will remain in sync.

Folder Sync is another free Android app to keep a phone folder in sync with SD card. The app is very simple to use and doesn’t come with many options in it. Just specify the two folders that you want to keep in sync and that’s it. The app will then let you keep the folders in sync. There are no options in the app to specify the sync behavior or sync interval. And you have to sync the folders manually. 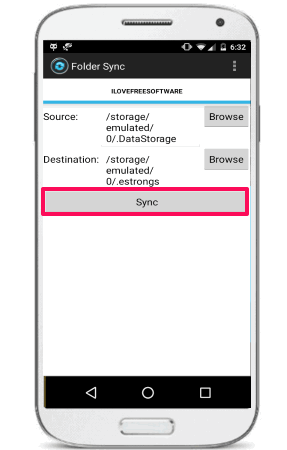 On the interface of the app, you will see two fields to specify the source and destination path. Specify the respective paths and then tap on the Sync button and the folders will be synchronized. You can create multiple profiles in it and specify two folders in each profile to sync them. The app is able to keep the folders in sync, but requites your involvement to do that.

These were some pretty cool Android apps to keep phone folder in sync with SD card. And in the above article, I have listed 4 such apps that can do that in an easy way. These apps come with various sync methods but differ in the sync behavior. So, if you want to sync folders automatically, then SMBSync2 and Local Folder Sync apps are good options. And if want to manually sync two desired folders, then Folder Sync is the right choice. So, depending on what suits your needs, you can try any of the app that I have mentioned above.