This article lists 5 free tank games for Facebook which let you drive tanks around and destroy enemies. Tank games are pretty fun to play. In most of the games to destroy enemy you have to point and shoot. You will also need to move your tank around the battlefield to locate the enemy vehicles. Most of the games will give you tutorials to understand how the game works. Basic controls will be shown to you for moving the tank around. Once you are through with the tutorial you will be taken to your battle field and pitched against other online players.

The tank games are quite exciting and you have to keep your focus otherwise you might lose the battle. So let’s go ahead and look at these free tank games for Facebook below. 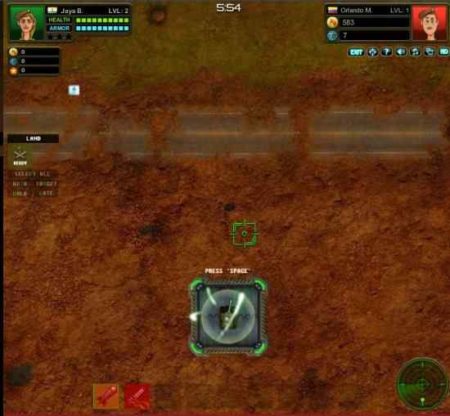 Tank Fighter is a fun tank game for Facebook. In this game you start with a tutorial where you will be shown how the game works. You are in training to become a tank fighter and you should know how things work. So your commander will guide you through this tutorial before you are ready for a actual battle. You will be shown how to control your tank, for which you can use the arrow keys. For firing a cannon use the left mouse click. Just aim and shoot your target. You will be given mission to destroy enemy and you just have to keep moving forward.

You also have to keep a check on your health and armor which will be displayed in the top left corner. After you are done with the tutorial and know everything you need to know, you can fight a actual battle with another online player. This time you will have no help from a guide, you are on your own. You will be paired against a online player and the battle starts.

Armada Modern Tanks is a free tank game for Facebook. This game also starts with a tutorial , so you can understand how things work in the game. You will enter your name to start with and then you will be guided through the tutorial. You can use the arrow keys to move your tank around and rotate your tank tower using the Q, W, and E keys. Move around the area to find targets and attack them.

The graphics of the game are pretty nice, but it is a bit slow to load. The background sound is good too. Once you are through with the tutorial you can go into a actual battle ground with other players. Run around the area with your tank and shoot the targets you find. Achieve your level objective given on the left side to level up. Also upgrade your tank armor to keep yourself protected. 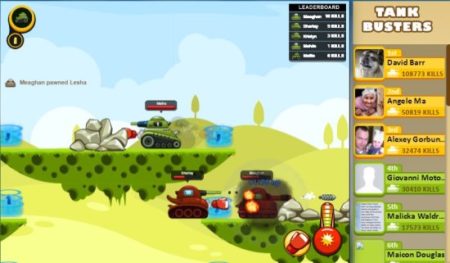 Tank.io is a free tank game for Facebook which is quite animated. The game starts with you entering your name and clicking the play button. Then you will be taken directly to your battlefield. You will be shown how to move the tank around, how to shoot, how to aim, etc. Once in the battlefield you have to kill other tanks. Which as a new user you will find quiet difficult. There are other players in the battlefield with more advanced tanks, and the moment you land in the battle field some or the other player would shoot you. Its actually very difficult to survive.

I tried out a few times and was killed just within a few seconds. The best way to get even close to scoring is to run the moment you land in the battle field. Fight with tanks of equal caliber and avoid the bigger ones. The right side of the screen will also display the top players of the game with maximum kills. 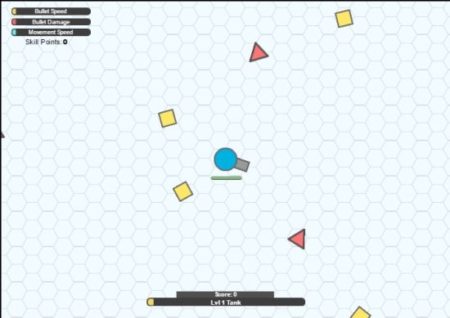 Tank.io by Mixgame is a fairly animated tank game for Facebook. As you can see in the screenshot above the game doesn’t have any high end graphics, just plain and simple animation is there. But at the same time the game is quite fun to play. In this game you are at the center of everything. The round tank in the center of the screen is you and the objects flying around you have to be shot down using the cannons in your tank. The yellow squares take two cannons to eliminate, whereas the red triangles take 3-4 cannons to disappear. The only down side is that the triangles are quiet fast in moving around, and if they collide with your tank you lose your health. The green bar under your tank indicates how safe you are. When the red triangles collide with you the green bar starts decreasing meaning you are loosing your tank protection.

So just aim and try to destroy the red triangles first, the yellow squares are quiet static and can be taken care of later. If the green health bar becomes empty that would mean it is game over for you. 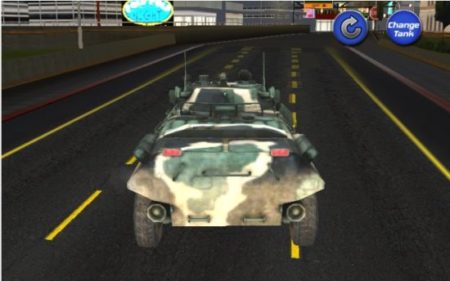 City Tank Simulator Real is a free tank simulator game for Facebook. In this game you do not have to battle it out with any enemies. All you have to do is choose a tank of your choice and drive it sound the city. Like driving practice for a tank. You have three things to choose from one is big army van, and two are proper tanks. Select which one you want by the change tank icon given at the top right corner of the game screen.

Once you have selected you ride, you can easily start driving. Use the arrow keys on your keyboard to control the tank. See how well you can drive and tank. Avoid colliding with walls and railings.

So these are the 5 free tank games for Facebook where you can become a tank fighter and destroy enemies. The game I liked the most in this is Tank Fighter, the game has awesome graphics and works pretty fast in full screen mode. The tutorial is good and explains everything on how the game works. So go ahead and try these games out and see which ones you like.