Here are 5 free floating notes Android apps to take notes from anywhere. These Notes taking apps for Android will let you add floating sticky notes windows to take notes. These floating notes windows stay on top of all other Android apps and you can drag and move them to any part of the Android screen. There are many apps to add sticky notes to Android homescreen but the apps included here will allow you to add notes to any of the Android screens. Some of these apps even allow you to take notes while attending a call, so through these apps, you can take notes anywhere on Android without having to open a note taking app again and again. You can simply add a new floating sticky note window and take notes.

You can also use these in conjunction with Android apps to copy text from any Android screen and paste the extracted text on these floating sticky notes window. I am quite sure that this might help you in quickly jotting down some important points anywhere on Android. 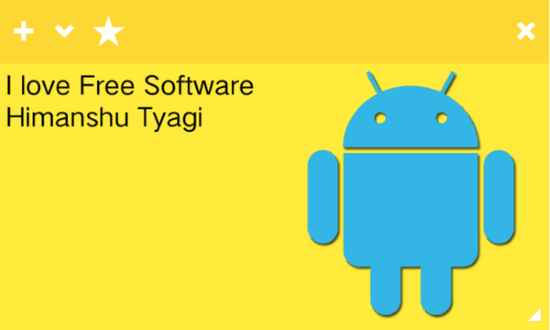 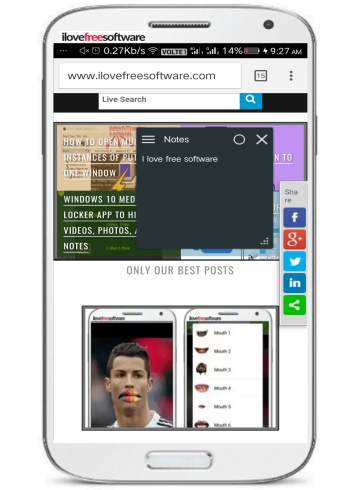 Floating Notes is a free floating notes Android app to take notes from anywhere on Android. You can take notes while watching movies, playing games, or while using any of the apps on your phone. It opens up as a small floating window on which you can jot down notes, as shown in the screenshot above. The best part is that you can move it anywhere on Android screen, adjust its size, and toggle its notes taking floating window. The app also lets you adjust the opacity of the floating notes taking window and open multiple windows to take notes simultaneously in its PRO version. You can also save the notes as a TXT file on your phone. It also supports basic text editing options like cut, copy, and paste text. In addition to these options, you can also share the notes with other apps and share text from others apps to it. The app interface is itself quite similar to a sticky note window. After installing this app, open it to add a floating sticky note window. You can take notes on this floating window by typing in or you can also copy and paste text from other apps. To save the notes as an TXT file, tap on its three dots menu and select the Save option. After that, specify the TXT file name and the note will then be saved in the app folder. 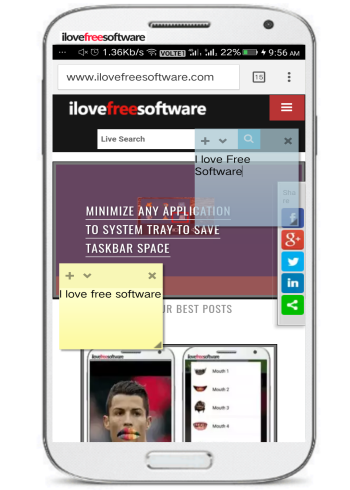 The next app on my list to take notes from anywhere on Android is Floating Stickies. As its name suggests, this app lets you write notes on a floating window on any Android app or screen. Unlike the previous similar app on my list, this app lets you add multiple floating windows to take notes for free. You can copy or cut the text from the floating stickies and also paste the text in it. You can also share the stickies notes and save them to cloud services as a TXT file. The best part is that you can add as many floating stickies as you want and save their states i.e. notes with just a tap. Apart from that, these floating notes stickies will stay on top of all other apps. The opacity of a floating note sticky is automatically adjusted, so that you can see the content of the Android app screen beneath it. You can bring back the focus to the floating notes window by tapping on its interface. To open a new floating notes sticky, tap on the “+” button and jot down the notes on it. You can just can’t simply select the text from the floating stickies. You can find the options to cut, copy, paste, and share notes from the floating stickies on the drop-down menu (tap the down arrow button to open it). Once you have taken all the required notes, you will have to save the notes explicitly. To save all of your notes, tap on the “Click to save & close all stickies” Floating Stickies option from the Android notification panel. 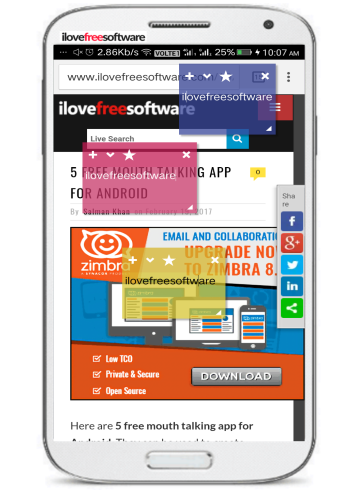 Sticky Notes is another Android app to take notes on top of any other apps on Android. This app is based on the previous Android app on my list i.e. Floating Stickies. The only difference that I figured out was of user interface i.e. Sticky notes has a better user interface than Floating Stickies. In terms of usability and functionality, they both are kins. Well, I do like its interface and you can pinch on the floating window to increase its size. You can use it in the same way as the previous app i.e. drag and move floating stickies to move them to any part of an Android screen, open multiple floating stickies, and save all floating stickies notes to read them later. There is not much of a difference between these two apps but if you are one of those who prefers better interface then you can surely go with Sticky Notes. 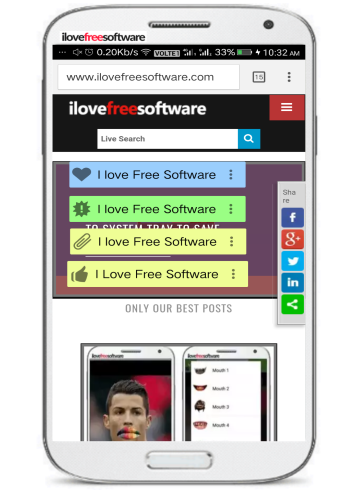 Floating Sticky Notes is another free notes taking Android app to take notes from anywhere. Like most of the other notes taking Android apps on my list, this app will also let you add multiple floating stickies to take notes. You can either choose to keep on top of all other Android apps or within the app itself. It gives you a quick access to add stickies and read all of the notes from its widget which appears in the Android notification panel area. You can simply tap on the Add button on its widget to add a new floating sticky note. After that, you can take the note by typing or you can also copy and paste text from other sources. Next, if you want to keep the taken note on top of all other Android apps then simply tap outside its interface. However, in this case, you won’t be able to resize the floating sticky window. So, this might interfere while working with other apps, you can drag and move this floating sticky note window to any part of the Android screen. If you want to save the notes within the app, then tap on the right arrow button. After that, the note will be automatically saved in the app and you can read it from the Notes section of the app. You can also control the visibility of the floating sticky window from the app’s widget. It lets you make the floating sticky invisible so that you can work on other apps without any problem. You can toggle its visibility to read it or make it stay on top of other apps. 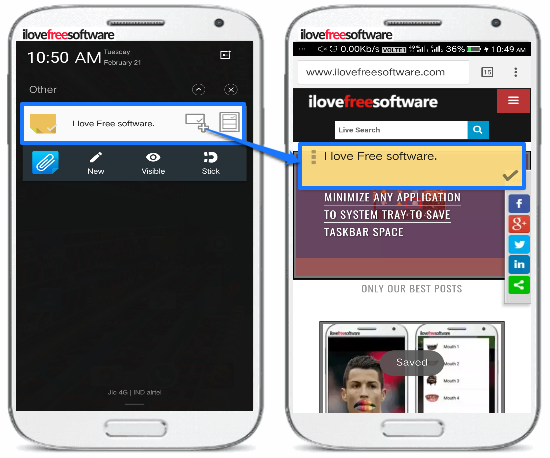 1Sec Note is another free notes taking Android app to take notes from anywhere on Android. What separates it out from other Android apps on my list is that it gives you the option to backup notes to Google Drive, Dropbox, Evernote, and OneNote. Apart from this feature, it works quite the same as other notes taking Android apps included here. However, you can’t add multiple floating sticky notes windows on Android screen. You can just add a single floating note window on which you can take notes. However, you can save the notes on the app itself to read or access them later. To add a floating sticky note window, tap on the “+” button on its widget that stays in the Android Notification panel, as shown in the screenshot above. After that, you can take notes and choose to either keep the note as floating sticky note on top of all other Android apps or save the note in the app. If you want to keep the note as a sticky note, then after you have jotted down the note simply tap outside the floating sticky note window. To save the note in the app, you have to tap on the right arrow button. The note will then be saved in the app and you can view it by tapping on the button right next to the “+” button. You can also connect your Google Drive, Dropbox, Evernote, and OneNote account from the app preferences. After connecting your cloud services account, you will see the button to backup the current note to any of these cloud services. In its pro version, the app lets you specify the Dropbox and Google Drive folder in which you want to save your notes.

Here in this article, I introduced you to 5 free floating notes Android apps. From these apps, you can take notes on top of all other Android apps with the help of floating stickies. If you ask me, I found 1Sec Note to be the most useful as you can choose to backup notes to Google Drive, Dropbox, Evernote, and OneNote. Apart from 1Sec Note, I will recommend you to check out Floating Sticky Notes and Floating Notes. Floating Notes gives you the option to save the notes as TXT file. Make sure that you have checked out the pro tip mentioned at the beginning of this article and let me know how useful was it for you :)