This tutorial shows how to remove People Bar from Taskbar in Windows 10. People Bar (or People) is a new toolbar which helps to pin favorite contacts to Taskbar. But if you don’t want to use it from Taskbar, then you can remove it easily using two different and built-in options of Windows 10. You need to use Settings and Registry Editor to remove People Bar icon from Windows 10 taskbar. Unlike other pinned programs and apps, you can’t unpin People icon from Taskbar using right-click menu. Therefore, these two methods will come in handy. All the steps for these two methods have been detailed in this tutorial.

In the screenshot above, you can see that earlier People Bar icon was visible in taskbar, but later it is removed.

This is an easier and faster method. 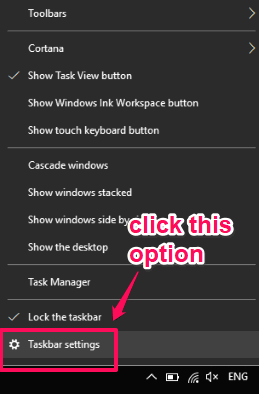 Step 2: Settings app of Windows 10 will open with Taskbar settings. There you will see a lot of options. Scroll down those options and you will see People section. This section has a “Show people on the taskbar” option. This option remains turned on because of which People Bar icon is visible on the Taskbar. Just turn off this option. 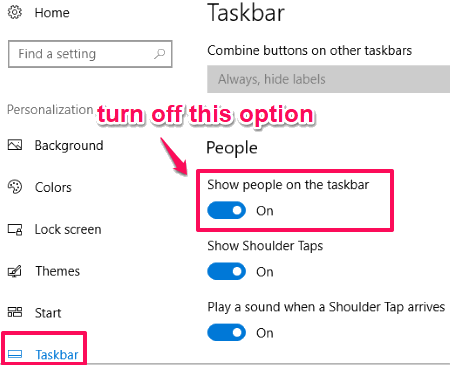 That’s it! Turning off this option will immediately remove People Bar icon from taskbar.

Whenever you want to show People Bar icon again in taskbar, you can turn on the same option anytime you want.

Step 1: Press Win+R to open Run box, write regedit, and press Enter. This will help you open the Registry Editor window. You can also type regedit in Search box to open Registry.

Step 3: After accessing People key, you will see a “PeopleBand” DWORD value on the right side. Its default value is set to ‘1’, which means that People icon will be visible on Windows 10 taskbar. To remove it from taskbar, double-click PeopleBand value and then put ‘0‘ in the Value data. 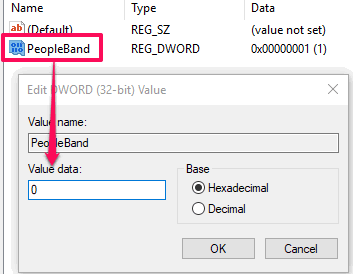 Save it and then you must restart File Explorer or PC. After that, People icon will remove from taskbar. To add People icon to taskbar again, put ‘1’ again in value data of PeopleBand DWORD value.