To find out the visual center of any image, you don’t need to do anything manually, except uploading the image. Actually, what happens is, after uploading the image “Visual Center” starts calculating the visual weight value (square root of contrast between background color and pixels) for all the pixels available on that image silently. After that, its built-in algorithms attempt to balance the visual weight value in all the image directions. Doing so, it generates the result with the exact visual center of your image. 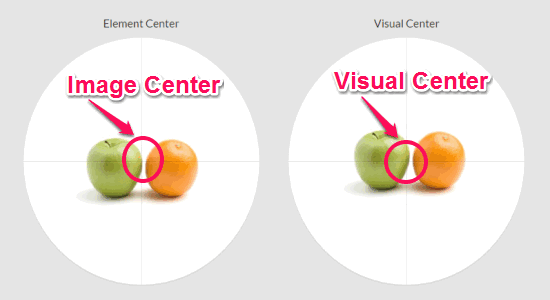 How to Find Visual Center of Image:

Step 1: Visit the homepage of “Visual Center” and you will see a sample image comparison for element center and visual center. At the top of the window, there will be an option using which you can upload an image from your PC. It also lets you drag and drop any image to the window. 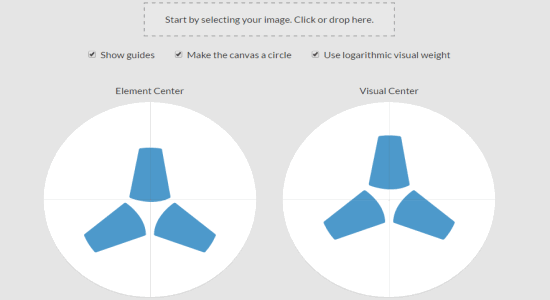 Step 2: Once you’ve uploaded an image, it will instantly show the comparison between the actual image center (element center) and the visual center of the image. You will be able to see the center difference in the point where the vertical and the horizontal lines intersect, as shown below. 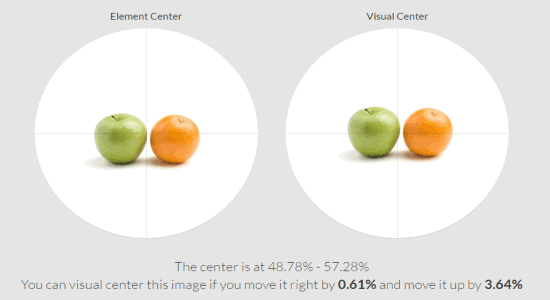 Step 3: Below the image center comparison, it will also show that where the center of your image lies in the percentile range of 0-100.

Step 5: It also has the options to disable the vertical and horizontal lines, toggle the canvas between circular and square, and see the visual center of the image without using logarithmic visual weight.

If you’re a graphic designer, then this tool is definitely for you as you can use it to align any logo, header image, 3D model of any object surrounded by whitespace, and more. To find the exact visual center of any image, all you need to do is upload the image and you’re done. It will instantly generate the result and show you ow you can place your image in the visual center. However, I really wish it gave the option of doing basic edits to the image to visually center it; or better still, it would have been great if it would have been available as a plugin to some of the popular image editing software.