Scrabble Free, is a free board game app available on iPhone, iPad, iPod Touch and Android Devices. It is a simple free board game app developed by Electronic Arts. This app is rather an interesting and easy to use app, with regards to other apps available in the market. Moreover, the developer’s name in itself is enough to put your trust on.

The game once launched, allows you to sign in through Facebook or Origin and play with your friends. However, it also allows you to play this game as a guest. 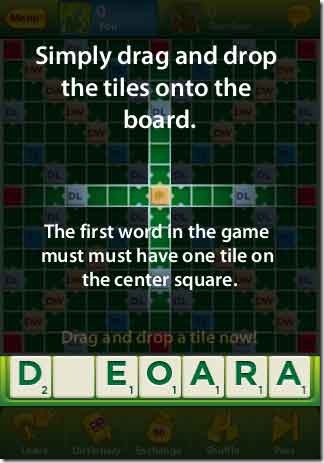 The game can be played by three ways: either by playing with friends, or random computer selected opponents, or even pass n play mode, that allows friends to play by passing the device. The game allows the flexibility to exit the app and automatically waits till the time the opponent’s turn has been taken. This flexibility feature makes it a great scrabble game. Not only that, playing with a random opponent brings its own excitement!

A cool feature of the game is the “Teacher”, which tells you the best possible word you could have made with the alphabets available, only after your chance you over. The easy access to the dictionary mid game which tells whether a word is valid or not, is another helpful feature. The game layout deserves a round of applause, the color schemes are mild and soothing. The user-friendliness is par excellence and the game is lag free.

Also check out other Scrabble apps, as well as play Scrabble online.

How to Play Scrabble Game on iPhone, iPad, and more:

The game app once launched allows you to sign in on Facebook, Origin or play as a Guest.

Once, the game commences, a set of alphabets is allocated to you and the opponent.

The aim is the make the words using alphabets you have and the ones that are on the board, that fetches you the maximum points.

Each alphabet has a numerical point that it awards you, once it is used.

The player with the maximum points wins ! 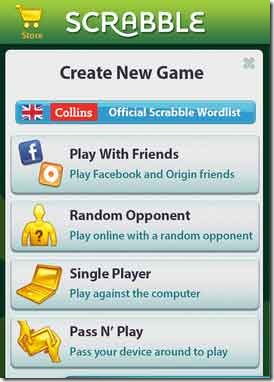 There is nothing that I dislike. The game is too simple, too good and too beautifully crafted that it has left no major stone unturned. 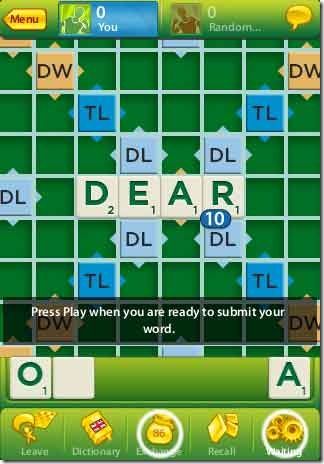 The Scrabble Free by Electronic Arts, is an excellent app for classic board game Scrabble fans. It is a must have app for those interested in killing time and showing off their vocabulary. This app tremendously helps in building vocabulary as well. I recommend this app and I rate it a 3.5 on 5.