Ruzzle is a free iPhone word puzzle game which lets you play against real opponents. You can choose to play against Facebook Friends, Twitter Followers, Ruzzle Friends, and Random Opponent. The Random Opponent options lets you play against any other user of the app. While playing the game, each game consists of 3 rounds of 2 minutes each. You need to find the maximum number of words in the given time interval for which you are awarded with points. The player with maximum number of points at the end of all three rounds is declared the winner.

The game also displays interesting stats in the middle of the game as well as at the end of the game. Some of the stats are Accuracy, Maximum Word Length, Total Words Found, Total Words Hidden in the game, etc. The best part of the app is that you can find the words by matching alphabets in any order like horizontally, vertically, diagonally, and even in zig-zag. The game also has an offline mode which you can play to practice your word finding skills. 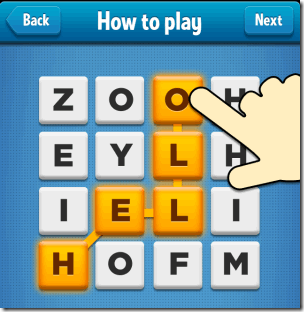 You are required to register with the game for playing the online matches. If you don’t have any account then you can only play the offline mode of the game. The game lets you register using either registration form or using Facebook. After the registration, you will see the home screen of the game.  You can see the option Start A New Game. Tap on the option to go to next screen for selecting the type of opponent you want: Facebook Friends, Twitter Followers, Ruzzle Friends, or Random Opponent. 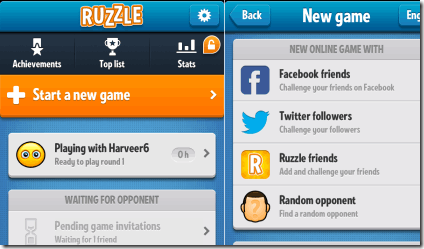 Choose the appropriate opponent type and wait for the app to find the opponent. Once app finds the opponent, you can start playing against him/her by tapping on Play. On the next screen, you will see the grid of alphabets along with the timer at the top. You can match the alphabets in any directions for finding the words. You can see that there are a few alphabets with words TL, DL, etc. written against them. These alphabets will give you extra points which will help you in boosting the overall score. 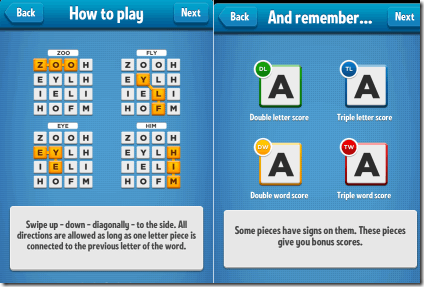 Similarly, you have to play all the three rounds and the player with highest points at the end is declared the winner. You can also choose to resign any game by tapping on Resign option after the end of any round. Do remember, all the games resigned by you will be considered as lost games for you. So, it will make your overall record look ugly. You can also choose to chat with your opponent by tapping on the icon at top left. 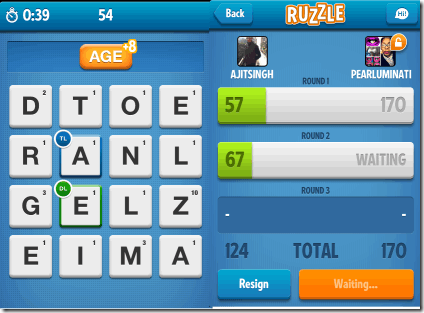 Apart from this, you can see that the app’s home screen has 3 more options: Achievements, Top List, and Stats. The Achievements option lets you view the locked/unlocked achievements while the Top List option displays the ranking of players. The final option Stats displays very interesting stats about your game play but it’s a Paid feature.