In post, you will learn how to monitor video memory usage of any GPU. To do this, here I will talk about some free software that you can use on your PC. Those software allow you to monitor the GPU usage in real time. If you want to know how much GPU memory is being consume during a graphics intensive task, you can use any software that I have mentioned below. And not just the memory usage but you will be able to see other stats as well such as hardware details, core clock, fan speed, load, shader, etc.

At times, you may need some video memory monitoring tools to see how efficiently your GPU is handling video encoding or decoding task. All the software here can mention the real-time. And it doesn’t matter if you are using Nvidia or AMD GPU or Intel’s built in GPU. They will be able to show you the correct stats no matter what. You just start them and then they will take care of the rest. Some of the software that U have mentioned here can even show you the video memory usage graphically.

How to Monitor Video Memory Usage on any GPU? 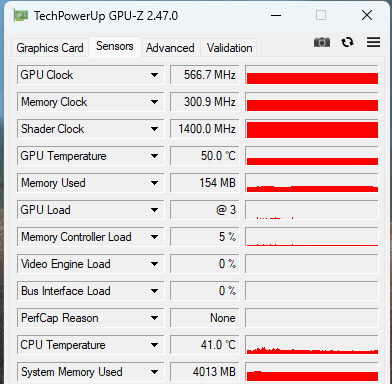 GPU-Z is one of the best free software that you can use to monitor video memory usage of any GPU. This is a quiet popular tool as well among system admins as well. It shows complete hardware details of the GPU installed on your PC and then shows real-time stats as well.

With this, you can easily track the memory stats along with the other GPU parameters such as clock speed, temperature, memory clock. You just have to launch it and it will identify the GPU installed and show you the stats.

This is a completely free software and you can download on your PC from above link. Install it and then you can simply launch it. On the main screen of the software, you will see the hardware properties. Here it basically shows you model and make of the GPU along with some other manufactured data.

To see the memory consumption, you just switch to the Status tab and in the “Memory used” field, you will see the amount of memory in mega bites that it being used by the GPU right now. MSI Afterburner is another very nice tool you can use to track and see the video memory usage in real-time. This is a complete GPU configuration and tweaking utility that you can use. Here it can show you video graphics memory being used as a whole as well as graphically.

The graph is updated in real-time and the best part is that it shows the graphical data of single or multiple GPUs installed on the same screen. If you have more than one GPU then monitoring them will not be a problem as it can detect them with ease and besides it has a very intuitive GUI.

Even though this software is provided for free by MSI, it doesn’t require you to have a MSI board to work. You just download it from the link above and launch it. Launch it and it is pretty interface will show up. Although it shows the GPU memory stats on the main screen, it is clock speed. 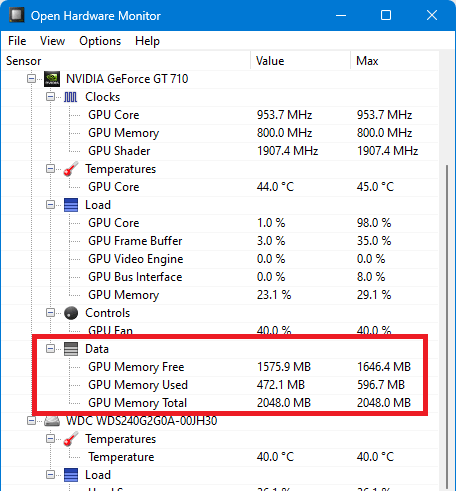 It has a simple GUI and you only need find your GPU listed there to see the video memory statistics. Apart from tracking video memory, using this tool, you will be able to see details and usage by other hardware as well.

Since this is an open source tool, so you can build it yourself or you can simply download one its releases from above. You can launch the software right after you extract the ZIP file and then main interface of this software will show up. Scroll down to the section where it shows you the stats about the GPU.

You can see the frequency of the GPU memory and when you move further down to the Data section, you will see the video memory usage in details. Here it will show you the overall GPU video memory, memory free, and memory in use. EVGA Precision X is basically a GPU overclocking utility that you can use and that’s why it supports showing a lot of status of the installed GPU. You can use it on PC running any graphics card and it will be able to show you the real-time video memory usage to you.

It shows you the current memory usage of your graphics card in graphical view as well and you can tweak the memory frequency if you want to. This software is most suited for gamers and people who would to push their GPU beyond limits.

You can download and install this software form the link above. After that, you just install it and then launch it, In the beginning, it asks for some information about your GPU and sadly you can’t skip that. On the main interface itself, shows GPU stats.

If you are looking for some best free tools to monitor video memory of your GPU then you are at the right place. Just use any software from this list and you will be able to achieve that with ease. Just download and install any software and it doesn’t matter what manufacturer’s GPU you are using, it will show you correct real-time GPU memory. Personally, I will recommend you to use GOPU-Z and Open Hardware Monitor. But you are free to try other software as well.