Here, is a list of 3 free software to count lines of code.

Lines of code (LOC) is a standard metric for counting the size of a computer program or efforts involved. It’s a measure of the exact lines of code in a program, excluding all blank lines, pure white spaces, and lines containing only comments. But the question is how you can count these lines of code in your program?

Lines of code will vary between languages,  programmers, bracing style, commenting style, levels of experience, and corporations. So you need to have a good tool that can count the lines of code in your program, and gives you an idea of its complexity or productivity.

To help you out, we have found some free software to count lines of code. Have a look and give them a try. 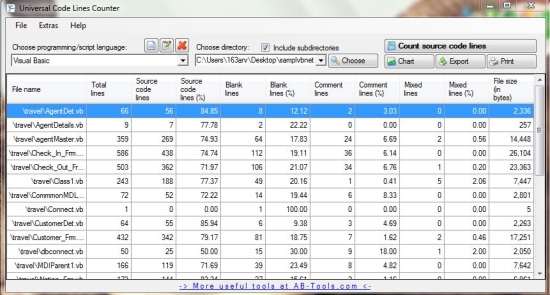 Universal Code Lines Counter is a free application that counts the exact number of source code lines in a software project. It’s a handy and reliable tool that separately counts the lines of code, blank lines, and comments in multiple files in one go. Universal Code Lines Counter comes with an intuitive program interface that not only counts the source code lines, but also gives you detailed report of your software project as table or as graphics (in pie chart form).

By default it supports many programming languages including C#, C/C++, AutoIt, CSS, Delphi/Pascal, Java, JavaScript, HTML, Modula 2/3, MySQL, PHP, Prolog, Python, Perl, Ruby, VBScript/ASP, XML and Visual Basic. Plus it gives you options to configure it for more programming  or script languages. Download free and give it a try!

Get it here: Click here to Get Universal Code Lines Counter. 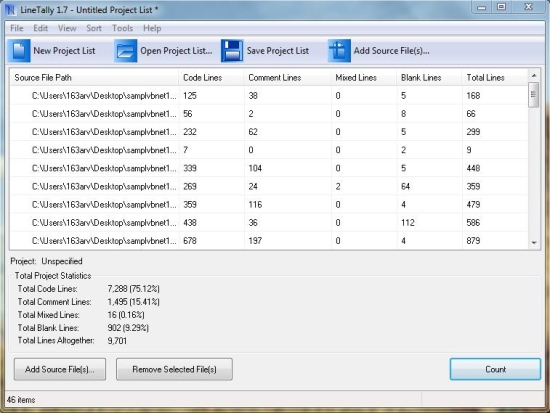 LineTally is a another free desktop application that lets you easily count the lines of code, comment lines, mixed lines, and blank lines in your project. It’s a lightweight tool for counting the size metrics for a single file, or for all the files in your project simultaneously. Plus, it gives a summary of total project statistics for quick reference.

LineTally works with high accuracy and produces super fast results. Apart from that, it lets you export reports to CSV, HTML, or TXT format. Download free and check it out now! 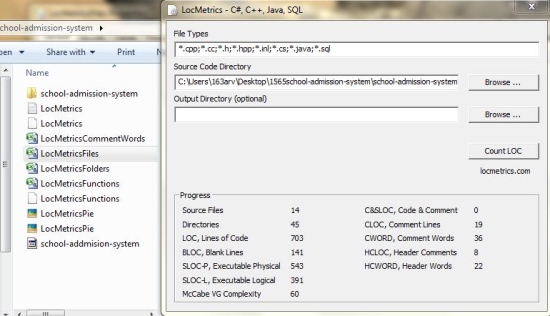 LocMetrics scans your entire project directory and generate excel reports in CSV format containing information on individual project file metrics. It saves the reports in the source folder by default if you don’t provide the destination folder. And it also generates a comment word histogram and saves it in the same folder for visual analysis. On the interface, it displays the progress of the LOC count of the entire project which gives you an idea of total project statistics.

These were some of the best free code line counting tools I have found that supports multiple programming languages to count lines of code for all the files in your entire project. If you find some other useful software, do let us know in comments.