Here is a free online SSML generator with WYSIWYG support and audio playback. Here it offers you a powerful SSML editor that you can use to generate SSML code. And the best part here is that you can control a lot of voice parameters in the text that you enter. You can choose different voices for speech and automatically generate the corresponding code. However, currently, there are only English and German languages are supported. But in later updates, may be there will be more languages to generate the SSML.

SSML stands for Speech Synthesis Markup Language. It is used for generating synthetic speech from voice applications. In this, you specify the text that will be converted to speech and with some other properties. You can specify when to speak fast, slow, in low tone, in high tone, etc., and get the corresponding SSML code. If you try to create SSML code manually, then it will take a lot of time. But using the tool that I have mentioned here you can do it very quickly.

The SSML editor here takes text from you and then you can customize the speech. You just have to log in with your Google account and then start generating the SSML. And before getting the actual code, you can use the audio playback to hear the speech. If something isn’t right, then you can customize the speech again and then hear it. You can use the different male and female voices for your speech and get the SSML code in the end. 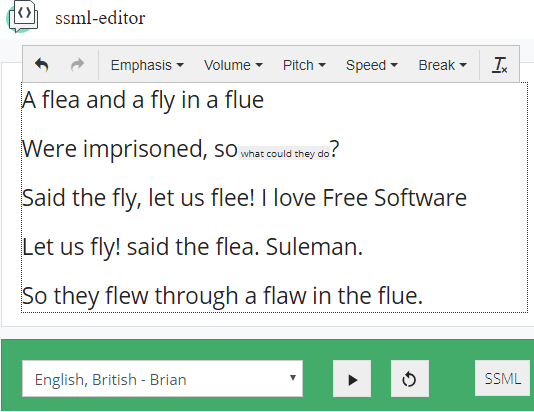 How to Generate SSML Online with audio Playback ?

Speech is a very important aspect of AI and if you are creating such application which uses speech then you should use SSML to do that. With SSML, you can make the speech output more accurate and with customization, you can make it sound human. And this tool, ssml-editor lets you do that.

You can reach the homepage of ssml-editor and then log in with your Google Account. After that, you can start using it to generate the SSML code for your application. 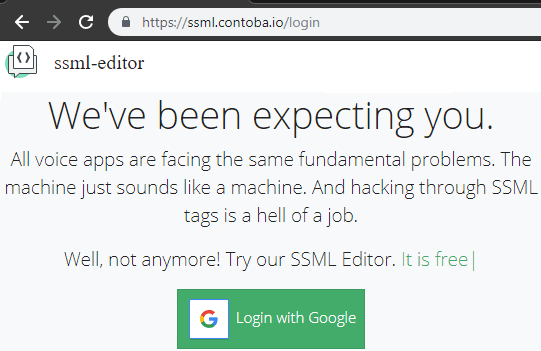 In the editor there is some random text already. You can clear that and enter the text for which you want to generate the SSML code. After that, you can start customizing the speech. Use different options from the editor toolbar to customize the speech text. You can make the speech volume, soft, whispered, loud, change the speed of the speech, add a break, emphasize a sentence, and use some other options. And in the end, you can use the audio payback to hear the speech that you have created. 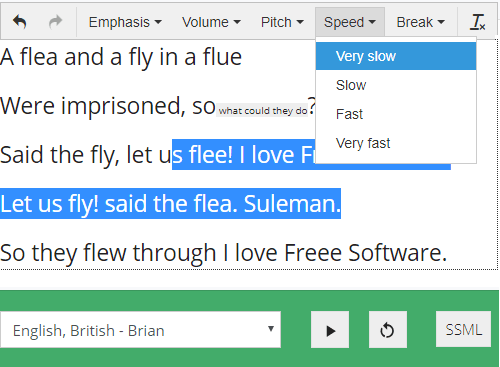 After everything is fine, you can get the final SSML code. Click on the “SSML” button to get the speech code and copy it to the clipboard. And after you have the code, you can use it in your app or do whatever you like. 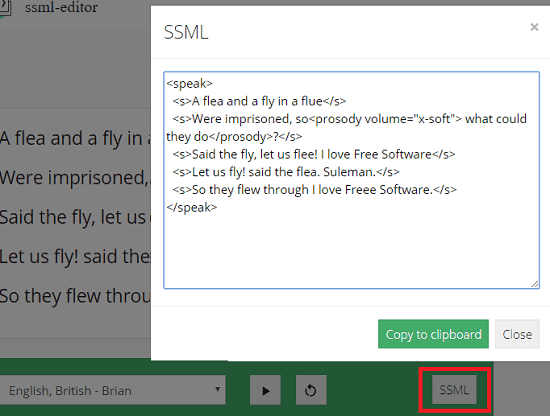 Above, you can see how this simple online tool works to let you generate SSML code. You just have to give the text to generate a speech and customize a lot of speech parameters. Since, you don’t have to deal with the code here so it will save you a lot of time.

ssml-editor is an amazing online tool to generate SSML code in a very easy way. It lets you fully customize the synthetic speech in the easiest way possible and you can use it anytime you want. You just have to sign via your Google account and use the WYSIWYG editor to customize the speech and get the SSML code. Simple as that.