You can get these iOS 8 extension for any of your iPhone, iPad, iPod Touch running on iOS 8. Let’s get started with the tutorial. I will explain What are iOS 8 Extensions first, and then I will move to how to use iOS 8 Extensions.

What are iOS 8 Extensions?

iOS 8 Extension is a feature added to all Apple mobile devices, which lets iOS apps to interact with each other. This feature has been available on Android devices since quite a long time, but its a first for iOS devices. All the iOS 8 extensions come pre-loaded with all iOS apps, which support it. You don’t have to search and install them manually from iTunes App Store.

For the users’ perspective, the iOS 8 Extensions lets them interact between two apps, without leaving current app’s interface in which they are working. Let’s understand this with an example.

Suppose, you are surfing a webpage on Safari browser on your iOS devices (iPhone/iPad/iPod Touch) and you want to save it to Evernote or Pocket etc.. for reading it later or to read it on some other device, which might not be an iOS device. Then, there is no way you can do it directly from the Safari browser. Even if you will tap on Share option, you won’t find any option related to Evernote for sharing it. 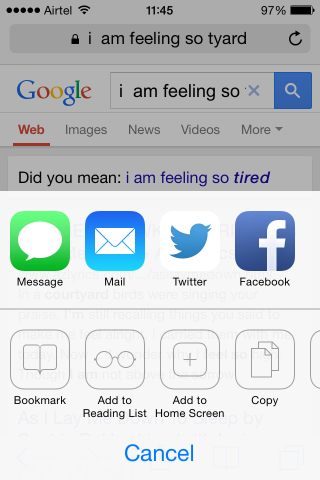 But with iOS 8 extensions enabled, you can share webpage to Evernote directly from Safari. You just have to tap on Share option, choose Evernote, and webpage will be saved to it automatically, with you still being on that webpage.

This is just one of the many uses of iOS 8 extensions which you can do.

How to Use iOS 8 Extensions?

All the extensions can be enabled or disabled from the More option under Share option available in iOS apps. You can refer to screenshot below in which I have opened the Share>More>Activities. Here, the apps with a toggle on/off button refers to iOS 8 extension. You have to toggle this button to enable or disable any of the iOS 8 extensions.

You can see that I have opted for Evernote app for sharing a webpage and I got this pop-up from Evernote for sharing it, without even leaving Safari web browser and opening Evernote app on my device. 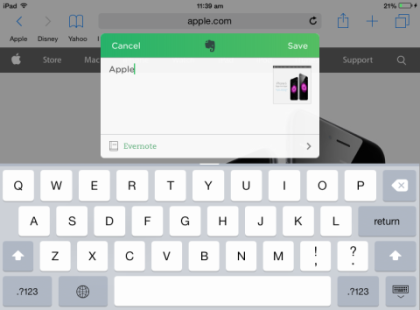 As I have already mentioned that all iOS 8 extensions come pre-loaded with their respective apps, so if you choose to uninstall any of the apps, you will also lose the corresponding iOS 8 extension.

In his way, you can use iOS 8 extensions with ease and take your productivity and iOS device user experience to another level.