Meme Generator Free is the free meme generator app for iPad which lets you create custom memes. All you need to do is import a photo from your iPad’s photo album. You can enter any text to your custom photos to make the next viral meme for internet. The app lets you set the font size of text while typing the funny quote for your meme. If you are a fan of ready made memes instead of creating your own custom ones, then this app also lets you use them. The app has about 400 memes for you to use. You can add any text of you choice to these already popular memes.

Some of the available popular memes are: 10 Guy, 1990s Problems, Advice Dog, Ancient Aliens, Angry Guido, Annoyed Picard, Anxiety Cat, Awkward Moment Seal, and much more. The app has categorized all the memes in different categories for making it easier for you to find them. The app lets you save and share memes with your friends. 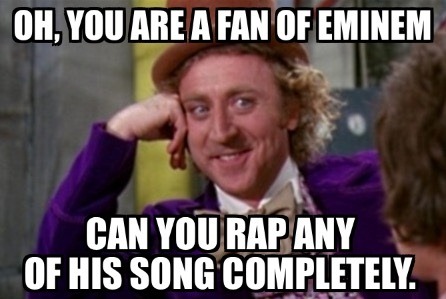 How to Create Memes On iPad:

When you will launch the app, you will find list of the memes available in the app. Since app has about 400 different memes, it means you will have to swipe a lot of times on your iPad screen to check all of them. But, app developer has certainly provided a few tools which can help you in going through them easily. When you start swiping on the screen, you will see that there are two options: Top and Bottom. You can tap on them to go to top or bottom of the list directly without any need of going through all of them. The app also has a search bar for typing the name of any meme. You need to enter the correct name of meme for finding it. You can also tap on the option at top to select the category: All Memes, New Memes, Popular Memes, Favorite Memes, and Random Memes. 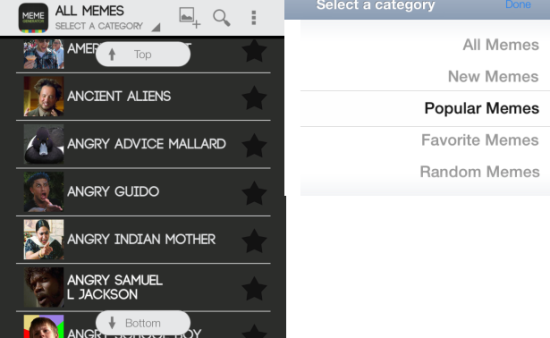 You can see that each of the meme has its preview image, name, and a star icon. The star icon is for marking any meme as Favorite. It helps you in saving your Favorite memes so that you don’t have to go through all the memes again and again. Now to create your custom meme, tap on the one which you want to use. You will see the meme creator has appeared as shown in screenshot below. 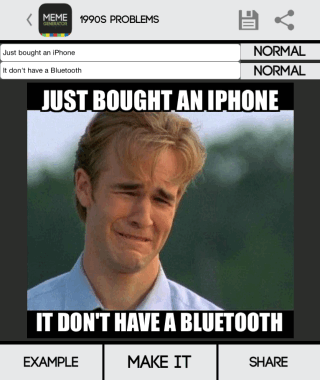 At the top, there are two text boxes in which you have to enter the quotes which you want to use for your meme. In first box, type the line which you want to be at top while in second, type the one which you want at bottom. You can select the font size as: Small, Normal or Large. The app doesn’t display preview of your meme in real time. You need to tap on Make It option to check it. After creating the meme, tap on Save/Share option to save or share the meme. It also has an option called Example. This option displays some of the examples which suits the meme selected by you. 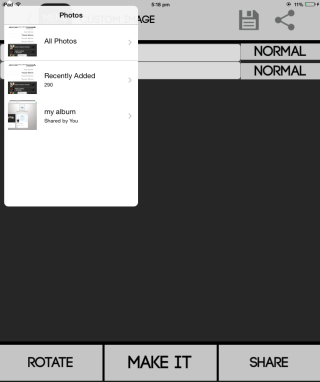 You may also like: Meme generator for iPhone by Memecrunch.

Meme Generator Free is a really cool meme generator app for iPad. I was really impressed with the huge collection of 400 memes in the app. I was absolutely spoilt for choices. I tried most of them and created various funny and unique memes. If you are meme fan or want to create your own custom memes, then go for this one.