This article lists 5 free Pirate games for Facebook. These pirate games will let you battle it out with your enemies and collect lots of treasure. Pirate games are quiet fun to play and most of them have a battle format where you are fighting a enemy clan. Some of the games in the list are different then battle games as well. One game you will find which is mostly spin the wheel type, where what action needs to be taken is decided by spinning the wheel. One game is more of a match 3 kind of pirate game.

All the games will give you a pirate looking interface with pirate images. Some of them do have a little difficult to understand interface. But nothing you won’t understand in a while and a few tries. So let’s look at these free pirate games for Facebook below. 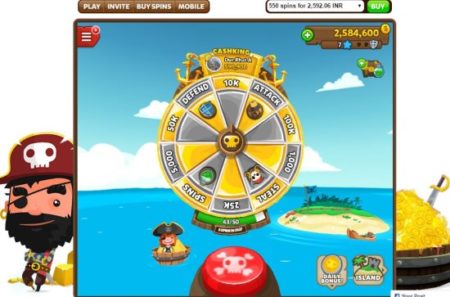 Pirate Kings is a free pirate game for Facebook. In this game the home page will have a wheel for you to spin. On this wheel you can win coins, get to attack another island, etc. Click the red button to spin the wheel. When the wheel stops spinning, whatever the pointer is pointing at will be what you have to do. If the pointer lands on coins then coins will be added to your total at the top right corner.

If the pointer lands at the attack option, then you have to attack another users island and get all their resources. When the attack mark comes up on the wheel, the red spin button will change in to a cannon to shoot at your opponent. You can also go to your island and build stuff on there, like buildings, get ships for defense, get animals, etc. Make you island defense strong as others might attack your island and you will have to defend it.

Keep spinning the wheel and keep on winning. Keep on attacking other islands to get money and their resources and don’t forget to defend your own island properly as well. 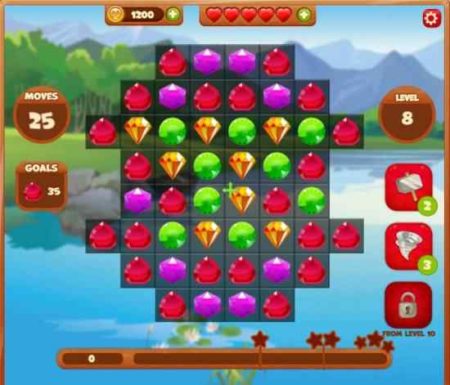 Pirate Treasures is a fun pirate match 3 game for Facebook. In this game you are the pirate who is looking for treasure. To get to the treasure you have to go through various riddles. These riddles are the match 3 games, in multiple levels. You have to complete all the levels to reach the treasure. On the game board shown in the screenshot above you have to match 3 or more same jewels to eliminate them from the board. To help you achieve your goals you will also get special power boosters. Your goal of each level can be seen on the left side of the game window in a limited number of moves also mentioned on the left side.

Keep moving forward by clearing levels to reach the treasure. You get 5 lives to begin with in the game and if you are not able to complete a level then you will lose a life. 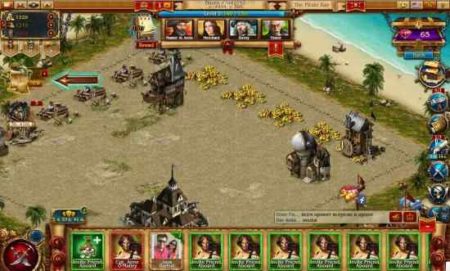 Pirates: Tides of Fortune is a free pirate game for Facebook. Here you are guided through everything by a narrative voice. You start with building new building on your pirate land. Then you learn different crafts to survive and make a team of pirates. You have to build and protect your own pirate island. In turn you earn coins and experience points.

You can also invite your friends to join your pirate gang and attack other and loot treasure from them. After gaining certain number of experience points you will be able to level up. The current level you are at can be viewed at all times on top of the screen. The top left side of the screen will display the number of coins you have and wood stock that you have. 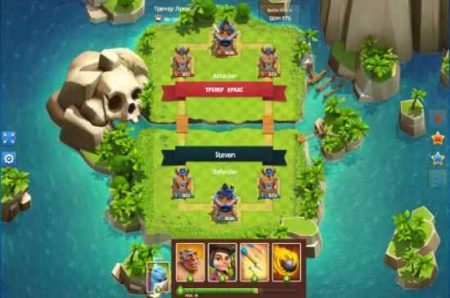 Pirates is a fun pirate game for Facebook. In this game two pirate clans are fighting each other. In the beginning of the game you will be given battle training and after that you can choose actual battles. It is a multiplayer game where you can fight with other online players. Fight with the opposing clan and win or earn points. These points can be used to upgrade your soldiers for a better defense next time. You also win a treasure chest after certain number of points, which will unlock more treasure and cards for you.

The battle takes place when you place one or two of your soldiers to fight the enemy clan. Apart from soldiers you can also fire arrows and throw fire cannon balls at your enemy target. You can also view leader board for ranking of players and achievements which you can complete. 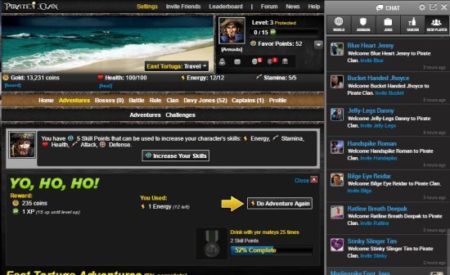 Pirate Clan is a pirate game app for Facebook. In this game app you have to start with choosing a character you want to play with out of the given 6. Then you will be taken to the game screen. Where you can battle it out with your enemies. Just press the do adventure button and you will be shown a status for the adventure. You will earn coins and experience points for each adventure you undertake. Your energy will be used in each adventure which will regenerate automatically with time.

You do need to upgrade your skills from time to time, to make sure you win most of your adventures. You can see the current level you are at from the top right of the screen. Where as your coins, energy, health, and stamina can be seen on top of the screen. There is also a chat window on right side of the screen for online players to chat.

These are the 5 free pirate games for Facebook which you can enjoy in your free time. Most of the pirate games in the list are about pirate battles. So if you enjoy this type of game play then you will enjoy these games. The game I liked the most was Pirate Kings where spinning a wheel decides what action has to be performed. So do try these games out and see which ones you like.