This tutorial explains how to sync Gmail at specific time in Android. You will be able to specify the exact time at which Gmail should sync. You can even specify multiple times for each day, and separate times for different days of the week.

For this, I will talk about 2 different Android apps that let you do this. One of these infact lets you setup different sync times for different Gmail account!

And of course, these apps won’t affect auto-syncing options of your other Android apps.

So let’s get started and see how to sync Gmail at a specific time in Android: 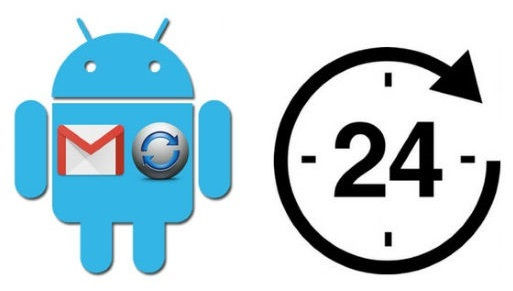 How to auto sync Gmail at specific time using Sync My Mail:

Sync My Mail is an Android application that totally solves the problem to sync Gmail only at a specific time. As I mentioned above, this Android application will let you specify multiple times at which Gmail will be synced. Suppose, you created a time of 3:00 PM, then Gmail will be synced exactly at 3:00 PM. You can also sync Gmail at the specific time on a regular basis by choosing days, like you can create a time of 2:00 AM that will sync Gmail on weekends i.e. Saturday & Sunday. You can choose to sync Gmail at a time that can run every day, on weekdays (Monday to Friday), and on Weekend at the same time. 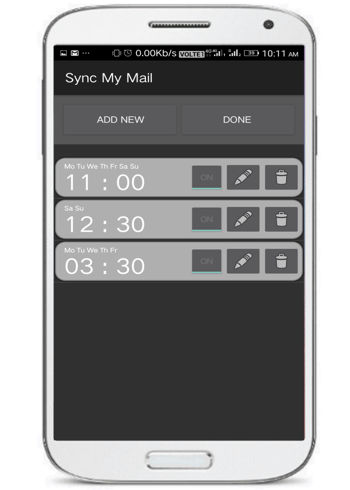 Now, let’s see the steps for creating time stamps to sync Gmail at that time and with day filters:

Step 1: Download and install Sync My Mail from the link provided above.

Step 2: Click on ADD NEW button to add a time stamp, which will then pop-up a clock to set the time at which you want to sync Gmail automatically, press OK button to create a sync time. In the same way, you can create any number of sync times. 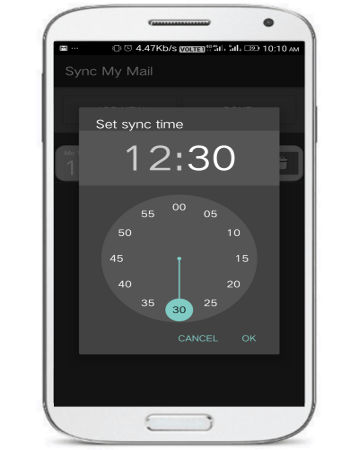 Step 3: After that, the sync time will then appear on its main screen. Click on Edit button to select days on which you want to run the syncing process at the time stamp specified in Step 2. You can choose every day, weekdays, or weekend to sync Gmail at the specified time. 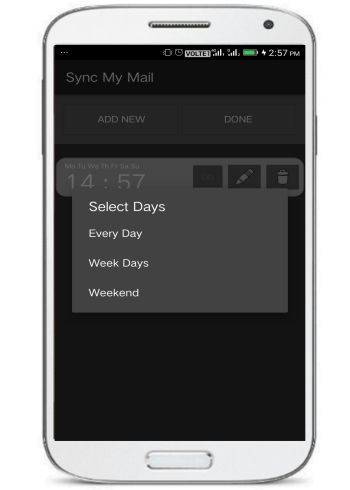 Mail Sync is another Android app to sync Gmail at a specific time. This Android app lets you auto sync Gmail during a time period i.e. you have to specify the start and end time of the duration and then Gmail will only sync during that period of time. You can also pick days on which you want to run the syncing process. The best part of this Android app is that it lets you specify different sync time at which different Gmail accounts will be automatically synced. 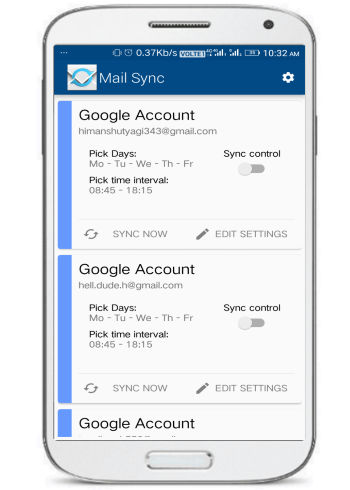 So let’s see the steps to sync Gmail at a specific time using Mail Sync:

Step 1: Download and install Mail Sync from the link provided above. When you open this app, it will automatically show a list of pre-configured multiple Gmail accounts with options to Sync now, turn on/off sync, and edit auto sync settings, as shown in the screenshot included above.

Step 2: Now, click on Edit settings button to specify end and start time at which Gmail will be automatically synced. It will then open up the next screen of the application to specify these parameters. You can also choose what you want to sync at that period of time like Emails, Contacts, or Calendar.

You can pick days on which you want to execute the syncing process. 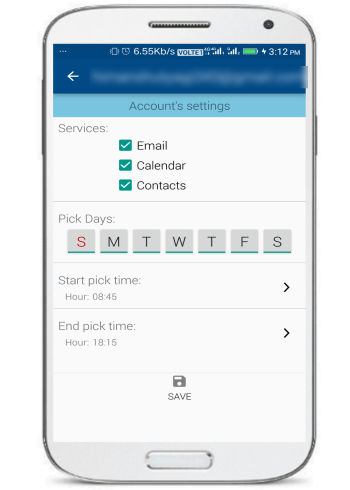 After specifying start and end time of syncing period, click on Save button to save the settings. Similarly, you can configure your other Gmail accounts to sync at a particular time period and on a particular day/days.

This tutorial explains how to auto sync Gmail at a specific time in Android. You can simply solve your problem to sync Gmail at a specific time in Android by using any of the apps mentioned in this tutorial. Both of these methods handle the problem through different ways like Sync my Mail can be used indirectly to sync Gmail after a time duration and Mail Sync lets you specify different time stamps to sync multiple Gmail accounts during that time period only. The best advantage of using any of these apps is that they do not alter syncing options of your Android device or any of your Android apps.