Wordiest is a free word game for Android Platform which serves as a great time pass and a great way to learn as well. It is a typical word game in which you simply make words from jumbled letters and the type of word you have made decides your score. You are judged on complexity, length, and usage of specific letters. You need to sign in using your Google account in order to play this game. This way you can also compete with the players worldwide.

This application will not only serve as a good pass time but also increase your vocabulary and allow you to discover new words. 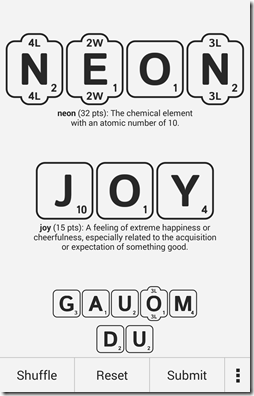 Wordiest is kept simple so that people of all age groups can use it easily. Also, it pretty efficiently solves the purpose it is designed for. Also, the game rules are pretty simple. You have the liberty to make two words in total from the given set of letters. All you have to do is drag letters that are provided, and add them to the boxes available above them. There is no restriction regarding how long the word can be. Also, it is not mandatory to make two words. You can also make one word only containing maximum letters.

Each letter has a number written to its right. That number represents the points that letter will carry. Sometimes there are letters which can be pretty challenging to use in a given set of words. These type of letters contain extra points. If you find a letter with ‘3L’ on it. That letter has triple the value mentioned along with the letter. If a letter contains ‘2W’, that will double the overall score. You can press reset to remove all your placed words. In case you want to change the perspective from which you are forming letters, you can shuffle the available set.

Once you are done with making your words, you can submit them.

Interesting Way to Compare Your Word Forming Skills with Other Players:

Now, there are lot of this type of Scrabble games already on Android store. But what I find unique in this game is the way your scores are compared with other players.

Once you have submitted the word(s), depending on the type of word you have made, you are given points. On the basis of those points you get a rating which keeps on increasing/decreasing as you play along. 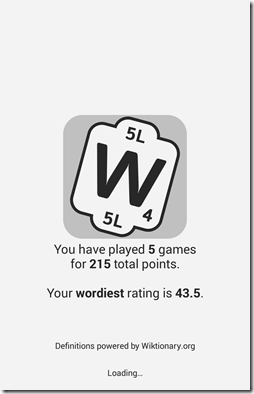 The best part of the game is the way results are shown. 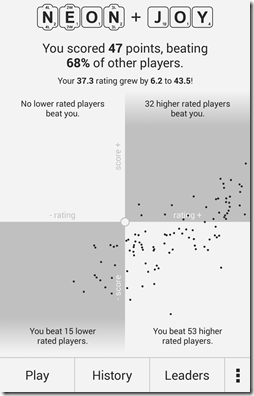 You are provided with dots plotted on a graph in increasing order of the scores. You get to know how many top rated or bottom rated players managed to defeat you and vice versa.

Since, knowledge is meant for sharing, you can tap on a particular dot to view the words made by that player. Not only you get the words, but also, the definition of those words from wikitionary.

Wordiest makes a serious attempt to club entertainment and knowledge. Learning new words has never been easier before. It is a must try application according to me.

Get Wordiest from Play Store here, or scan the QR code below: 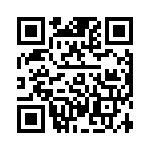